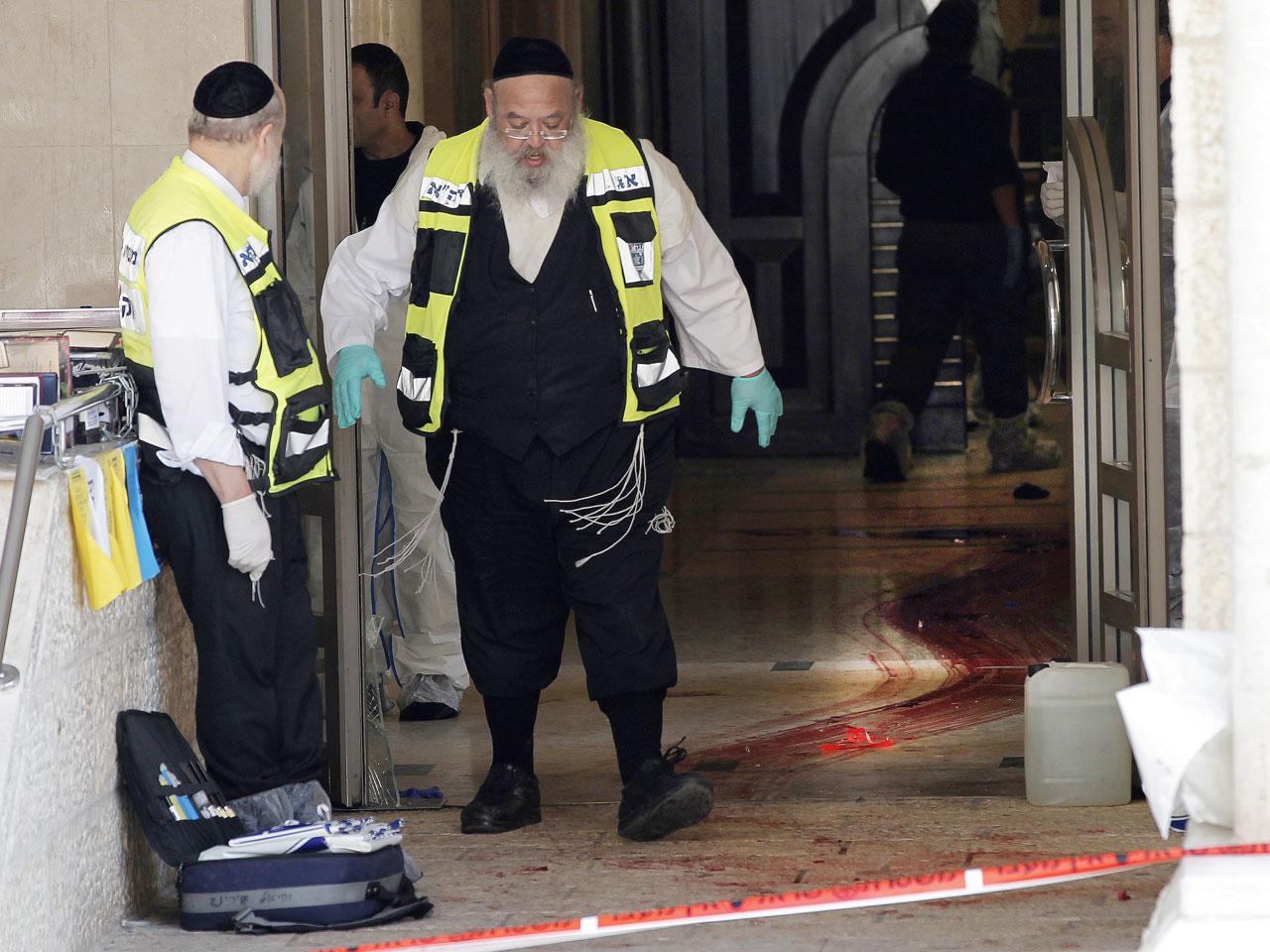 JERUSALEM -- Two Palestinians stormed a Jerusalem synagogue on Tuesday, attacking worshippers praying inside with meat cleavers and a gun, and killing four people before they were killed in a shootout with police, officials said.

Three of the victims -- Aryeh Kopinsky, Calman Levine, Moshe Twersky -- were dual American-Israeli citizens, a police official confirmed to CBS News. The fourth, Avraham Shmuel Goldberg, was a dual British-Israeli citizen. All four were also rabbis. A fifth victim, a policeman, died of his wounds later, CBS News reported. He was identified in the Jerusalem Post as 30-year-old Zidan Saif.

In a statement, President Obama condemned the attack, but urged for calm on all sides.

"At this sensitive moment in Jerusalem, it is all the more important for Israeli and Palestinian leaders and ordinary citizens to work cooperatively together to lower tensions, reject violence, and seek a path forward towards peace," Mr. Obama said.

It was the deadliest attack in Jerusalem in years and was bound to ratchet up fears of sustained violence in the city, already on edge amid soaring tensions over a contested holy site.

Prime Minister Benjamin Netanyahu vowed that Israel will "respond harshly" to the attack, describing it as a "cruel murder of Jews who came to pray and were killed by despicable murderers." U.S. Secretary of State John Kerry said he spoke to Netanyahu after the assault and denounced it as an "act of pure terror and senseless brutality and violence."

Palestinian President Mahmoud Abbas condemned the attack on the Kehilot Yaakov synagogue in the Har Nof neighborhood, the first time he has done so since a recent spike in deadly violence against Israelis began. He also called for an end to Israeli "provocations" surrounding the sacred site.

In a statement, Abbas' office said he "condemns the killing of the worshippers in a synagogue in west Jerusalem." The statement called for an end to the "invasion" of the mosque at the holy site and a halt to "incitement" by Israeli ministers.

The attack was the deadliest in Jerusalem since a Palestinian assailant killed eight students at a Jewish seminar in March 2008.

Police spokeswoman Luba Samri identified the assailants as Ghassan and Oday Abu Jamal from the Jabal Mukaber neighborhood in east Jerusalem, the section of the city captured by Israel in 1967 and claimed by the Palestinians as their capital.

The Popular Front for the Liberation of Palestine, a militant group, said the cousins were its members. A PFLP statement did not specify whether the group instructed the cousins to carry out the attack.

Hamas, the militant Palestinian group that runs the Gaza Strip, praised the attack. In Gaza, dozens took to the streets to celebrate, with some offering trays full of candy. In the southern town of Rafah, women and schoolchildren waved green Hamas flags and a loudspeaker praised the attack.

Police spokesman Micky Rosenfeld said six people were also wounded in the attack, including two police officers. Four of the wounded were reported in serious condition. He said police were searching the area for other suspects.

Wounded worshippers were being assisted by paramedics and a bloodied meat cleaver lay near the scene of the attack. Initially, police had described the weapons used as knives and axes.

Both Palestinian and Israel leaders have accused each other of fueling the recent spate of violence with confrontational rhetoric.

"I tried to escape. The man with the knife approached me. There was a chair and table between us ... my prayer shawl got caught. I left it there and escaped," Yossi, who was praying at the synagogue at the time of the attack, told Israeli Channel 2 TV. He declined to give his last name.

Yosef Posternak, who was at the synagogue at the time of the attack, told Israel Radio that about 25 worshippers were inside when the attackers entered.

"I saw people lying on the floor, blood everywhere. People were trying to fight with (the attackers) but they didn't have much of a chance," he said.

A photo in Israeli media from inside the synagogue showed what appeared to be a body on the floor draped in a prayer shawl, with blood smattered nearby.

Police spokeswoman Luba Samri said the attackers were Palestinians from east Jerusalem, which has been the scene of relentless clashes between Israeli police and Palestinian protesters in recent months. She identified the assailants as Ghassan and Oday Abu Jamal from the Jabal Mukaber neighborhood.

Soon after the attack, clashes broke out outside the Abu Jamals' home where dozens of police had gathered to carry out arrests in connection with the attack. Residents hurled stones at police who responded using riot dispersal weapons.

Neighborhood residents, speaking on condition of anonymity for fears for their own safety, said 14 members of the Abu Jamal family were arrested.

Mohammed Zahaikeh, a social activist in Jabal Mukaber, said a relative of the cousins had been released in a 2011 prisoner swap and re-arrested recently by Israeli police. He did not say why.

The attack comes amid spiking tensions in Jerusalem, which has seen a spate of attacks by Palestinians against Israelis. At least six people have been killed in Jerusalem, the West Bank and Tel Aviv in recent weeks, prior to Tuesday's casualties.

Jerusalem residents have already been fearful of what appeared to be lone wolf attacks using cars or knives against pedestrians. But Tuesday's early morning attack on a synagogue harkened back to the gruesome attacks during the Palestinian uprising of the last decade.

Israel's police chief said Tuesday's attack was likely not organized by militant groups, similar to other recent incidents, making it more difficult for security forces to prevent the violence.

"These are individuals who decide to do horrible acts. It's very hard to know ahead of time about every such incident," Yohanan Danino told reporters at the scene.

Tensions appeared to have been somewhat defused last week following a meeting by Israeli Prime Minister Benjamin Netanyahu, U.S. Secretary of State John Kerry and Jordan's King Abdullah II in Jordan. The meeting was an attempt to restore calm after months of violent confrontations surrounding a sacred shrine holy to both Jews and Muslims. Israel and the Palestinians said then they would take steps to reduce tensions that might lead to an escalation.

In his statement, Netanyahu blamed the violence on incitement by both Hamas and Palestinian President Mahmoud Abbas and said the international community ignores the incitement.

"Innocent people who had come to worship died in the sanctuary of a synagogue. They were hatcheted, hacked and murdered in that holy place in an act of pure terror and senseless brutality and murder," Kerry said.

The FBI routinely investigates attacks abroad in which U.S. citizens are killed and is expected to be involved in this investigation as well, a U.S. official in Washington said. The official spoke on condition of anonymity because the official was not authorized to speak on the record about the investigation.

Hamas' statement praised the synagogue attack, saying it was a "response to continued Israeli crimes, the killing, desecrating al-Aqsa (mosque)," a reference to a recent incident at the holy site.

Abbas, at a meeting later with security officials, called for calm.

"We call for a complete calm and a halt to all these attacks to enable us to move ahead with our political work," he said, according to the Palestinian official Wafa news agency.

Much of the recent violence stems from tensions surrounding the Jerusalem holy site referred to by Jews as the Temple Mount because of the Jewish temples that stood there in biblical times. It is the most sacred place in Judaism; Muslims refer to it as the Noble Sanctuary, and it is their third holiest site, after Mecca and Medina in Saudi Arabia.

The site is so holy that Jews have traditionally refrained from going there, instead praying at the adjacent Western Wall. Israel's chief rabbis have urged people not to ascend to the area, but in recent years, a small but growing number of Jews, including ultranationalist lawmakers, have begun regularly visiting the site, a move seen as a provocation.