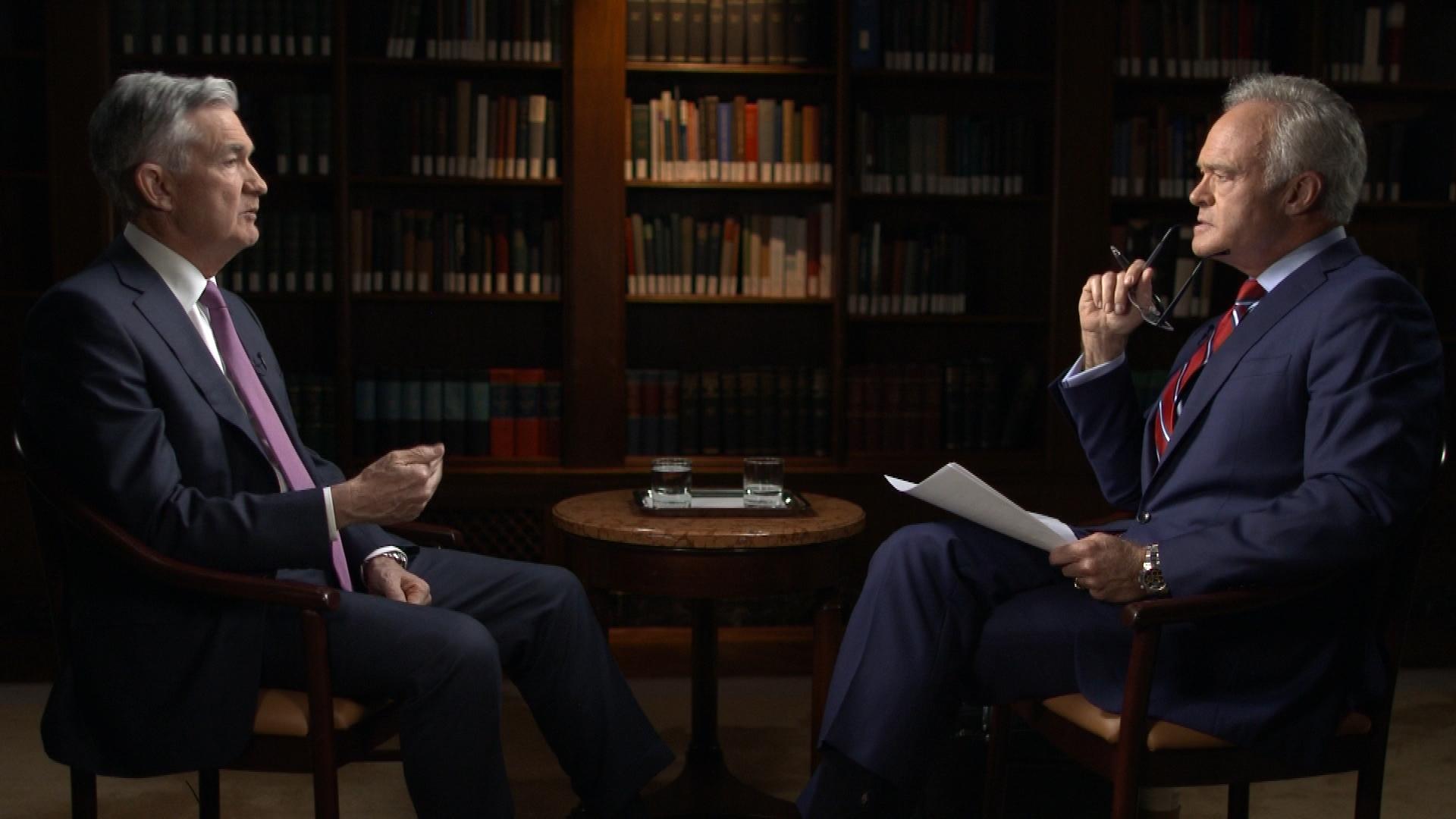 Last week, at the Fed's headquarters in Washington, we asked Powell about interest rates, whether the president can fire him and what he believes are the greatest threats to prosperity.

Jerome Powell: Well, that's a good question. We see the economy as in a good place. We think that the outlook is a favorable one. Inflation is muted and our policy rate we think is in an appropriate place. So what we've said is that we would be patient.

Scott Pelley: What does patient mean?

Jerome Powell: Patient means that we don't feel any hurry to change our interest rate policy. What-- what's happened in the last 90 or so days is that we've seen increasing evidence of the global economy slowing down, although our own economy has continued to perform well.

Scott Pelley: Where do you see weakness in the U.S. economy?

Jerome Powell: Generally speaking,the U.S. economy is coming off a very strong year last year. We had growth just a touch-- higher than 3 percent. We have high levels of employment, low levels of unemployment, wages are moving up. Consumer confidence is high, business confidence is high. We've seen a bit of a slowing, But I would say the principal risks to our economy now seem to be coming from slower growth in China and Europe and also risk events such as Brexit.

Scott Pelley: A record 7 million Americans have fallen behind on their car payments. Never happened before. What do you make of that?

Jerome Powell: Car sales have been quite high for a number of years. So the whole body of outstanding auto loans is much larger than it was. I think it also though shows that not everyone is experiencing this widespread prosperity that we have. And that's something we pay attention to as well.

Scott Pelley: Retail sales declined in December, the fastest pace since 2009. Are these things taken together suggesting that the system is blinking red?

Jerome Powell: There's also evidence, by the way, that spending has popped back up in January. But we'll-- that's a surprisingly weak reading and we'll be watching the next month's reading shortly.

Scott Pelley: But the overarching question is are we headed to a recession?

Jerome Powell: I think growth this year will be slower than last year. Last year was the highest growth that we've experienced since the financial crisis, really in more than 10 years. This year, I expect that growth will continue to be positive and continue to be at a healthy rate.

The Federal Reserve system was created by Congress a century ago to prevent financial panics. Its mission is to create maximum employment while keeping inflation under control.

Scott Pelley: You mentioned growth last year being slightly over 3 percent. That was with the tax cut and with unemployment in this country at a rate that we haven't seen in decades. Is that the best the economy can do now? Are the days of 4 percent growth over?

Scott Pelley: So 4 percent is something we shouldn't expect in the future?

Powell's experience in the workforce is a privileged one. Princeton led to Georgetown Law, which led to a Wall Street career that made him a multimillionaire. Now, as chairman, he's been raising rates in tiny increments to control inflation. But the president thinks he's gone too far.

Jerome Powell: I don't think it would be appropriate for me to comment on other elected officials or on the president.

Scott Pelley: Isn't it your duty to respond when the president calls the Fed a much bigger problem than China?

Jerome Powell: My duty is one that Congress has given us, which is to use our tools to achieve maximum employment and stable prices and to supervise and regulate banks so that they treat their customers fairly and so that they're strong, well capitalized and can perform their critical function in good times and bad. That's my job.

Scott Pelley: Can the president fire you?

Jerome Powell: Well, the law is clear that I have a four-year term. And I fully intend to serve it.

Scott Pelley: So no, in your view?

Scott Pelley: How independent is the Fed? Who do you answer to?

Jerome Powell: We are directed to take, to execute policy, in a strictly non-political way, serving all Americans and that's what we do. We are independent in that sense. Our decisions on rates can't be reversed by any other part of government. Our accountability runs through the elected representatives and the oversight committees in Congress.

Traditionally chairs of the Fed don't do interviews. Their words can upend markets. But that tradition was broken by Ben Bernanke on 60 Minutes during the Great Recession. Recently we assembled Bernanke, his successor, Janet Yellen, and Powell.

Scott Pelley: And I wonder what kind of advice you've given Chairman Powell about the withering criticism that you might get from the public, Congress, business, the president?

Scott Pelley: Chair Yellen, what advice did you give to Chairman Powell?

Janet Yellen: We worked together closely. And I knew that he knew everything that one needs to be a successful chair… to be inclusive in decision making, to bring many voices to the table, to listen carefully.

Jerome Powell: Being in this role is a very humbling thing. And you learn to listen to other people's perspectives pretty well.

Powell listens to a lot of perspective in the Fed's boardroom. The Federal Open Market Committee sets interest rates.

Scott Pelley: You've had four interest rate increases in your tenure. I wonder, were any of those unanimous?

Jerome Powell: They were all unanimous.

Jerome Powell: That's not to say that we don't have vigorous discussions and a range of perspectives.

The Fed wants to maintain inflation at 2 percent. About where it is now. But Powell told us he's flexible-- to a point.

Scott Pelley: If the inflation rate rises something over 2 percent for a limited period of time, that doesn't mean the Fed's gonna jump on the brakes?

It's taken nearly a decade to worry about inflation again. The collapse in the 2008 financial crisis was the worst since the Great Depression. Mortgage fraud on a massive scale caused the Dow to fall 54 percent and unemployment to rise to 10 percent. Taxpayers were forced to bailout reckless Wall Street excess. Back then, tighter restrictions were imposed on banks. But now, Powell and Congress are loosening those rules.

Jerome Powell: The American banking system is much, much stronger and more resilient than it was before the financial crisis. Particularly the largest banks have double or more the amount of capital, which is to say resources to absorb losses. In addition, we've required them to undergo resolution planning in case they do fail. There's a plan for what to do, which doesn't involve a taxpayer bailout.

Scott Pelley: But in 2007 the Fed missed the reckless, criminal banking that was happening. How do you know today that the banks are safe?

Jerome Powell: We spent 10 years analyzing, understanding what went wrong and trying to correct it.

Scott Pelley: A collapse of the financial system like we saw in 2008 cannot happen again?

Jerome Powell: 'Cannot' is a strong statement. You know, I would say that our system is vastly more resilient

Scott Pelley: How concerned are you about either criminals or more importantly hostile nations attacking our banking system through the computer system?

Jerome Powell: We devote very large amounts of time and resources to protect the Fed, but also to protect financial institutions and the financial markets. The banks we supervise are required to have plans in place and state of the art, you know, technology. I would say for cyber risk though, I've never felt a time when I-- when I think we're doing enough.

Scott Pelley: I have the sense that I just hit on the thing that keeps you up at night.

Jerome Powell: I would say of the risks that we face, that certainly is the largest one.

Jerome Powell: The kinds of risks that we faced in the financial crisis are very real, but we know I think generally what to do there. Cyber is a relatively new kind of a risk with nation-state actors. And it's one where-- the playbook is still being developed in real time.

Powell told us about another risk, hidden in our economy. It includes an estimated half a million workers who've given up looking for jobs.

Jerome Powell: We have an unusually large number of people in their prime working years who are not in the labor force. The United States has a lower labor force participation rate than almost every other advanced country. That is not our self-image as a country.

Scott Pelley: Where did these people go who are no longer looking for work?

Jerome Powell: Part of it is evolving technology. So as technology evolves, it requires rising skills on the part of the people. U.S. educational attainment has not moved up as rapidly as it has in other countries. Globalization's also a factor. For many advanced economies, manufacturing to some extent, has moved into developing countries. So for whatever reason, and the opioid crisis is related to I think to those other factors.

Jerome Powell: The opioid crisis is millions of people. They tend to be young males. And it's a very significant problem. And it's part of a larger picture.

Scott Pelley: you seem to be talking about part of this generation being lost.

Jerome Powell: That is the issue. When you have people who are not taking part in the economic life of a country in a meaningful way, who don't have the skills and aptitudes to play a role or who are not doing so because of because they're addicted to drugs, or in jail, then in a sense they are being left behind.

Still, these are not bad days to be chair of the Fed. Unemployment is near a 50-year low, wages are growing at a pace of more than 3 percent and if the expansion lasts another three months, it will be the longest in history at 10 years.

Scott Pelley: How long can it last?

Jerome Powell: I would just say there's no reason why it can't continue.

Jerome Powell:  Eventually, expansions come to an end. The business cycle has not been repealed. But I would say there's no reason why this economy cannot continue to expand.