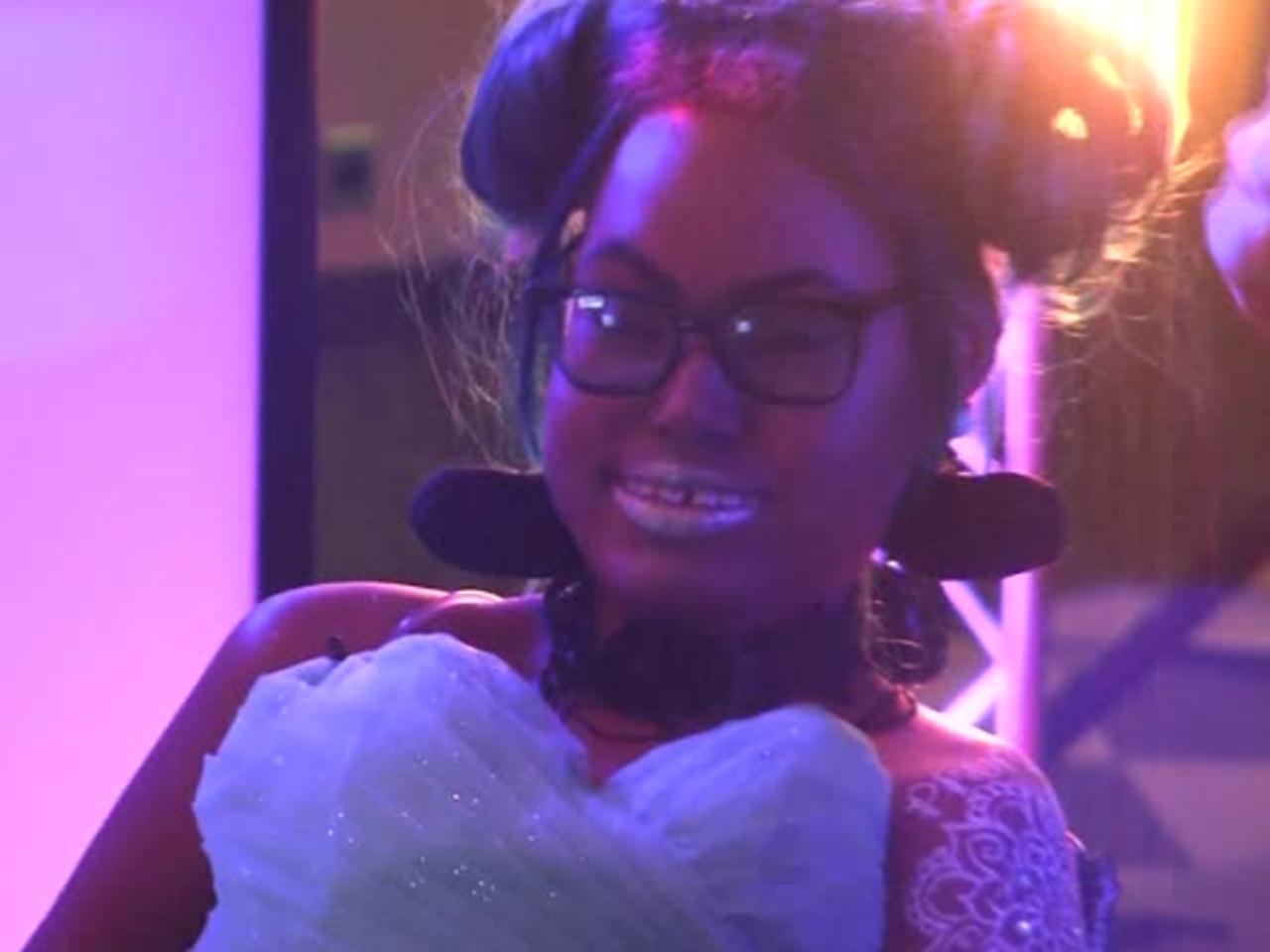 APPLETON, Wis. - They came from California, Florida, Indiana and points in-between. A YouTube star made a surprise appearance, members of a favorite boy band poured their hearts out in a video message and flowers arrived from around the world.

All for a 14-year-old girl from Appleton they had never met.

Jerika Bolen has spinal muscular atrophy type 2. The disease destroys nerve cells in the brain stem and spinal cord that control voluntary muscle activity, and a lack of movement causes the muscles to waste away. Jerika has never walked, and she said her pain is a seven on a scale of one to 10 on her best days. She can speak and has some movement of her hands, but the disease - and the pain - are only going to get worse.

Earlier this summer, with the support of her ever-dedicated mother, Jen, she decided that, while she can still make her desires known, she will move to hospice, unhook her ventilator and die.

But first, she wanted her last wish - a prom. Dubbed "J's Last Dance," she took to the dance floor Friday night as a steady stream of well-wishers flooded into the Grand Meridian ballroom in Appleton to say goodbye to a girl whose attitude in the face of heartbreaking misery has been inspirational.

As she soaked in Friday's hoopla, her hair dyed a shiny blue and wearing sparkling lipstick to complement her gorgeous greenish blue gown, Jerika said she was thankful but a bit perplexed as to why people have been so deeply moved by her story, which was first reported by The Post-Crescent.

"It's so amazing that people want to come for little old me," Jerika Bolen told CBS affiliate WFRV in Green Bay.

The hall was decorated in lime green and black, Jerika's favorite colors. The crowd overflowed the hall, which holds 1,000 people. A well-stocked candy buffet set up for guests was cleaned out in the first 90 minutes.

"I know that it makes her feel even more beautiful, and the attention is all that she deserves," Jen Bolen, Jerika's mom said.

Friday was set aside for happiness, and the work to accomplish that goal had begun long before the disco ball started spinning above the DJ station.

The living room in the Bolen house, which Jerika shares with her mother became a makeshift beauty salon on Friday afternoon as Jerika, her mom and several friends had their hair and makeup done.

Jerika wore a tiara and later added a prom queen sash to the ensemble.

The evening was momentous from the second Jerika emerged from the house.

Police and firefighters gathered at the curb and applauded as she maneuvered her power wheelchair to the red carpet and a 28-seat Ford Excursion limousine.

Jerika, friends and family were given an escort fit for presidents with a motorcade of 17 squad cars and a fire truck, all with lights flashing and sirens sounding.

Appleton Police Chief Todd Thomas stepped into the house to offer his best wishes before Jerika set off.

"We're just blessed to be able to help out," Thomas said. "It's an honor for us, and what an amazing young lady. She makes you appreciate what you have. She makes you think about using your time wisely. She's making an impact."

Multiple television crews greeted Jerika at the banquet hall. Floral bouquets set up on a table inside the Grand Meridian lobby had been ordered from New York, Washington, Georgia and Kuwait, among other distant locales. U.S. Rep. Reid Ribble sent flowers.

John Current, along with his wife and daughter, drove from Napa, California - a drive of more than 31 hours and 2,000 miles - to celebrate the life of a girl they hadn't met before Friday night. They brought a stuffed animal as a gift for Jerika, a thank you, they said, for the way she touched their hearts with her bravery and attitude.

"It's inspiring, it's sad and emotional," Current said. "It's the whole thing. She just captivated me."

The long drive was worth it to see her smile, and "out there on the dance floor looking like she's living life," he said.

Pain medications have taken their toll on Jerika, and the prognosis is that her body will soon lose the little function it has. She told her mother that it is time to die. But first, they agreed, there would be one more summer. And Jerika, a tech-savvy teen with a punk attitude and a love of alternative music, had a final wish - a special prom, a dance party for friends and family to dress in their "fancy" clothes and celebrate one more time.

The family established a GoFundMe page to raise $25,000 to pay for the prom and to offset expenses in Jerika's final days. The fund had stalled at $7,000 until a story, video and photos about Jerika from USA TODAY NETWORK-Wisconsin drew attention around the world a little more than a week ago. The fund has now surpassed $33,000.

When Jerika is placed on hospice in late August, she'll go without the ventilator that assists her breathing for 12 hours a day. She said she's at peace with her decision, but worries about leaving her mom behind to grieve.

So Jerika's first dance on Friday went to her mother.

Martina McBride's "In My Daughter's Eyes" poured from the loud speakers as Jen took her daughter's hand.

Jen leaned in close and said, "I hope this is the best night of your life."

How could it not be?

It followed a day full of surprises.

On Friday morning, two large flower bouquets arrived at their home as a gift from the California boy band New District. The band also recorded a video message to Jerika that was played on a big screen during the prom, and moments after, they engaged Jerika in a brief video chat.

Richie Giese, one of Jerika's favorite YouTube celebrities, dropped in as the biggest surprise of the night. The electro pop performer, who goes by the name Social Repose, flew in from Washington, D.C., and arrived at the hall in full costume, which includes a feather headdress and white face paint. They shared a dance together and later stepped out into the quiet to talk privately.

Giese said he, too, was inspired by Jerika's story. When learning she was a fan who had hoped to one day video chat with him, he knew he could do better.

"I thought, 'Let's just go all the way. I might as well make her day,'" Giese said. "Let's just push this over the edge."

Other visitors to Friday's prom said they simply felt a need to be there to support Jerika.

Margaret Norby, a junior at Appleton's Lawrence University, arrived with her boyfriend, Jackson Straughan, an LU senior. Norby had earlier reached out to the Bolens asking how she might help and had agreed to purchase corsages for the occasion - though the florist later told her they were on the house.

Norby said she was moved by Jerika's attitude in spite of her heartbreaking condition.

"I don't know how to describe it," she said. "She has a situation and an outlook that not everybody has. She has wisdom, and she's not apologetic about who she is."

For Jerika, the prom was at times overwhelming.

The size of the crowd and the constant flow of guests stepping over to grab selfies got to be too much for Jerika on a few occasions. She'd retreat outdoors or to the restroom in the company of her nurses to the let the stress settle before heading back to the dance floor.

MacKenzie Falck, 13, couldn't help but feel sad as the prom neared its final hour. She became friends with Jerika during elementary school and said their bond is deeper than friendship. She feels like family.

"I know she'll be with me," MacKenzie said. "She'll be an angel and she'll look over me, because that's what friends do, right?"

Jerika's mother, meanwhile, stood in awe at the outpouring of support that has come her daughter's way in the past week, highlighted by Friday's turnout for the prom.

"It's a celebration of her life, you know?" Jen said. "It was more than anybody could ever want or wish for - just a lot of love."

But as midnight arrived and the lights went on and the banquet hall began to empty, Jen's emotions began to crack. The reality of what's to come began to settle in. Prom planning had helped take her mind off her daughter's coming death. Now what?

"I have to be strong for her."

This man builds benches and hand delivers them to bus stops that don't have any
More
Thanks for reading CBS NEWS.
Create your free account or log in
for more features.
View CBS News In
CBS News App Open
Chrome Safari Continue
Be the first to know
Get browser notifications for breaking news, live events, and exclusive reporting.