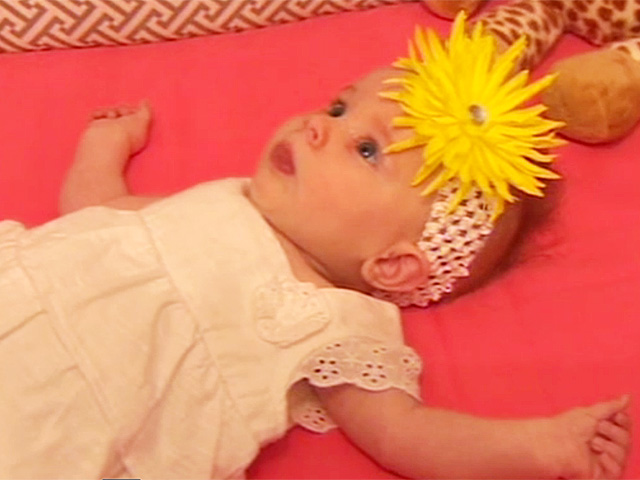 (CBS News) At only 5 months old, Avery Canahuati has already had her first kiss, her first tattoo (temporary), and her first trip to college. That's because after their daughter was diagnosed with an incurable genetic disorder and told she had only 13 months, at best, left to live, Laura and Michael Canahuati decided to launch Avery's Bucket List.

Avery seemed perfectly healthy when she was born, but eventually Laura Canahuati noticed her daughter wasn't progressing normally. Avery was diagnosed with spinal muscular atrophy, SMA Type 1, a disorder that destroys spinal neurons. Infants with SMA type I are born with very little muscle tone, weak muscles, and feeding and breathing problems. Avery has already lost the use of her legs, CBS affiliate KHOU in Houston reported. She is beginning to lose control of her arms, and may eventually lose the ability to breathe.

Spinal muscular atrophy is a group of inherited diseases that cause muscle damage and weakness, which worsen over time and eventually lead to death. There are four types of SMA. SMA Type 1, also called Werdnig-Hoffman disease, is the most severe.

"When they tell you your daughter will most likely die within the next 18 months of an incurable disease, that there are currently no clinical trials for, and that it's the number one genetic killer of infants, it pissed me off," Avery's dad Michael Canahuati told KHOU.

Instead of wallowing in sadness, Avery's parents decided to make the most of the time she has. "We can watch her die, or we can let her live," Michael said. "And through letting her live we're going to try and educate other people about this so they don't have to go through it too."

Avery's blog, "Avery's Bucket List," created by her parents but written in her voice, has received over 100,000 page views (one item on the bucket list) and has more than 4,000 followers.

On the blog, Avery writes, "I have a lot of living to do in just a little bit of time and I'm going to need all the help I can get." Items on the bucket list range from riding a horse to visiting the White House to getting married. "Nothing is too crazy and trust me when I say this, if you can dream of it for me, my mommy and daddy will find a way to make it happen," Avery "says" on the blog.

"I refuse to think that my daughter will die in vain," Avery's dad said.

SMA affects about 4 in 100,000 people. In most cases, the affected patient receives a defective gene from both parents.

Families of SMA has more on spinal muscular atrophy.