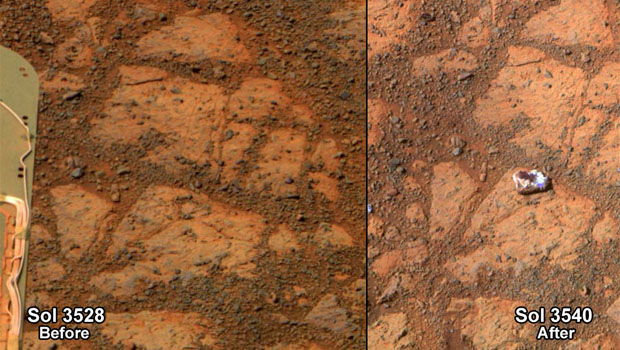 PASADENA, Calif. - NASA scientists are intrigued by a Martian rock resembling a jelly doughnut that seemed to appear out of nowhere.

The Opportunity rover earlier this month took an image of the rock, which was white around the outside and dark red in the middle. It was not present in earlier images of the same spot.

Chief scientist Steve Squyres has a likely explanation. He said in a presentation last week that one of Opportunity's wheels probably kicked up the rock, which then slid into its field of view.

Early testing of the "jelly" part of the rock revealed characteristics unlike any other rock the rover has discovered during its decade on Mars. The rock is high in sulfur and magnesium, and scientists are still trying to figure out why.