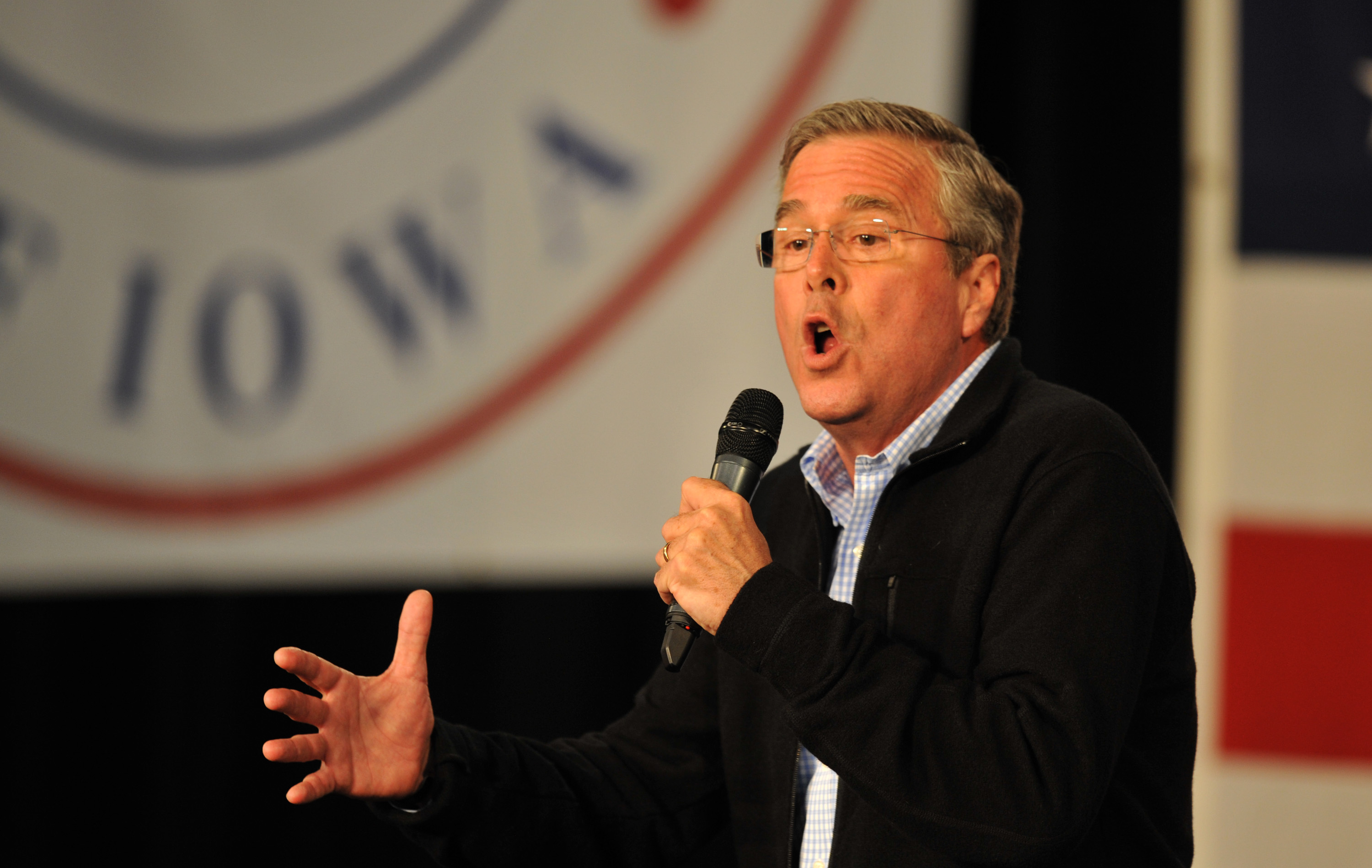 In Iowa, the Bush campaign is putting a spotlight on their candidate's record as a staunch defender of the Second Amendment. Robocalls went out over the weekend to 50,000 homes across the state, targeting likely GOP caucus-goers who feel strongly about gun rights.

"Our next president must respect and defend the second amendment and the stakes could not be more critical in this election," Bush says on the call, coming down on Obama and Clinton for repeatedly advocating more gun control. "As president I will respect your individual freedoms and your second amendment rights but in order to do that I need your help and support in Iowa." Bush also emphasizes his experience with gun legislation in Florida.

Bush has yet to hit double digits in the Iowa polls and with less than two months to the Iowa caucus his campaign is encouraging volunteers and precinct captains to underscoring his Second Amendment record with a one-pager titled "Jeb Bush: A Strong Defender of Our 2nd Amendment." It highlights Bush's positive relationship with the NRA, both his lifetime membership and his "A+" rating. It also makes the case that, under his leadership, Florida became the most pro-Second Amendment state in the country.

Gun policy is the most important issue for 6 percent of Iowa caucus-goers, according a Quinnipiac poll out last week. Sixty-one percent of Iowan GOP caucus-goers in this poll said they support changing the current gun law to ban those of the U.S. government's terrorist watch list form purchasing guns.

"There are frankly a lot of people who carry in order to defend themselves whether in public or in their homes," explains Iowa State Rep. Ken Rizer. He has already endorsed Bush and thinks these calls are a good thing.

"If Iowans do not already know his record on the Second Amendment, learning more about it would make them more disposed to support Jeb. Especially when they start comparing them to other candidates," Rizer adds.

But the fight for gun rights is a crowded space for politicians in Iowa, with several other candidates vying to brand themselves as gun-rights champions.

Just last week Donald Trump made the case that he is a "Second Amendment man" at to a raucous crowd at his rally in Des Moines last week and noted that his sons buy guns. He also invited Frank Brownell, Chairman of the Board at Brownells, one of the world's largest gun suppliers, on stage. Rubio had an event at Brownells Distribution building in Grinnell, Iowa in November but he did not talk about gun rights at all during that event.

Neither Frank or Pete Brownell, the company's CEO, have immediate plans to endorse a candidate but Pete does say: "These candidates should absolutely be talking about how they'll strengthen the Second Amendment."

Christie was asked about gun rights at an event in Iowa in October and he said he is for enforcing the laws that are already in the books. That said, he has been under fire from gun right enthusiasts for towing a more moderate stance on gun rights, namely supporting New Jersey's assault weapons ban.

Santorum, who is low in the Iowa polls now but won the caucus in 2012, has struck an even more explicit tone on gun rights - telling Iowans that they should be carrying guns.

"If you have a concealed carry permit, if you have been trained to use a gun and can use it proficiently, I think you have an obligation these days to carry a gun," Santorum said to a group of Iowans in Des Moines, as reported by the Des Moines Register.

Ted Cruz has also addressed the topic at length and just a few weeks ago Cruz hosted an event at a gun range in Iowa. On a recent Iowa swing he also repeatedly delivered a line that went over well on the trail: "You don't stop the bad guys by taking away our guns, you stop the bad guys by using our guns."