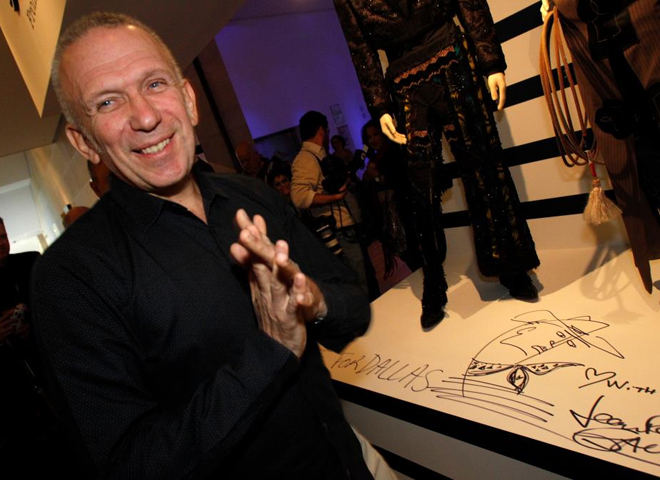 We begin a three-week look at some FASHION FORWARD clothing designers this morning by chatting with a true provocateur - a French designer who's not afraid to be outrageous . . . both on the runway, and on TV. Martha Teichner takes his measure:

Jean Paul Gaultier is famous for his weird, funny, sexually provocative fashions, such as his costumes for Madonna's 1990 "Blond Ambition" tour - gold bustiers and cone bras.

"What's the point of the pointy breasts?" Teichner asked.

"So it says something about a woman and power?"

Madonna's outfits are part of a huge Jean Paul Gaultier exhibition currently at the Dallas Museum of Art. Animated mannequins stare, blink, smile, even talk to visitors, as if they were alive . . . among them Gaultier himself.

"You make fun of my accent, because I don't speak perfect English accent," says the Gaultier mannequin. "If you don't understand me, you can understand me through my clothes."

Thierry-Maxime Loriot is curator of the show which originated at the Montreal Museum of Fine Arts. His zombie look-alike is wearing one of Gaultier's signature sailor shirts.

Loriot says that for Gaultier the sailor outfits represent a childhood memory, being a lover of "Popeye."

To understand Jean Paul Gaultier, you have to understand his childhood, when he dressed up his teddy bear with a little bra.

Nana was his first muse. An only child, he spent a lot of time with his indulgent, loving, somewhat exotic grandmother, while his parents were at work. It was in her closet he made a significant discovery

The story takes a racy turn where the body is concerned.

"The body is always very important for Gaultier," said Loriot, "and he wants to show, in fact, how we can wear nudity. How we can wear our own bodies and how we can show the body." He showed one example, completely embroidered with glass beads.

Gaultier is fascinated by skin, and loves to simulate tattoos, or a "leopard skin" made from beads.

By the time he began showing haute couture in 1997, Gaultier had a reputation as fashion's wild child, a rebel.

He insists all he's ever done is look at the conventional in unconventional ways: "Like a child, you know? Which is like an innocent eye that make you see beauty in someplace that are not expected to be."

Like a trash bag dress with an actual ashtray for a handbag.

This is how he describes the way he mixes and matches: "Two extreme meets and they get in love and so after they have a baby!"

"And that's a Gaultier?" asked Teichner.

Which isn't to say that everyone gets what he's trying to do. In 1993, Hasidic Jews were outraged when he turned them into fashion, with female models in the side curls and hats traditionally worn by men. The clothes themselves are actually pretty tame, when you compare them to some of his designs for stars. Carla Bruni Sarkozy, first lady of France, wore a backless number. Australian singer Kylie Minogue performed in a "stars and stripes" number.

"I think his work is terrifically significant because it is a dialogue with popular culture," said Kevin Tucker, the Dallas curator of the Gaultier show. "It has really been something that is a back-and-forth conversation between the worlds of fashion and popular culture. He embraces celebrity."

But his most outrageous designs have been for movies, such as the cult classic "The Fifth Element."

At 59, Jean Paul Gaultier still has the enthusiasm of a kid. After 35 years in the business, he still looks at the world with that "innocent eye" he talks about . . . seeing beauty in unexpected places.

"Everything I've ever heard about what you say is, 'Why not?'" said Teichner. "Are you Mr. Why Not?"