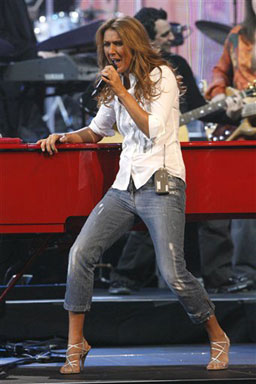 Things got a bit heated during the Toronto Blue Jays' six-run sixth inning against the Atlanta Braves.

Toronto, which has won four straight and 11 of 14, trailed 5-4 before the sixth. After third baseman Chipper Jones misplayed a grounder, allowing Shannon Stewart to reach, Craig Grebeck singled. Shawn Green then reached on a fielder's choice and Carlos Delgado hit an RBI single off Tom Glavine (8-9) to tie it.

Mike Remlinger relieved and Tony Fernandez hit a fielder's choice to shortstop Walt Weiss, who threw over to second baseman Bret Boone. Boone was scraped on the arm as Delgado slid hard into second base.

Boone then stared at Delgado and said something.

"It's not ballet, it's baseball," Delgado said. "I'm going to go in hard every time. If they don't like it, they can get out of the way or do something about it. Just don't run your mouth."

Remlinger then walked Tony Batista before Fletcher hit an 0-2 pitch just over the right-field wall to give Toronto a 9-5 lead.

"It could've gotten ugly out there," Fletcher said.

Jose Cruz Jr. followed with a single, and Homer Bush's RBI double made it 10-5.

After Green led off the seventh with his 27th home run, Atlanta's Russ Springer hit Delgado with the next pitch. That brought players from both teams to the top of the dugout steps, but nothing further happened. In the eighth, John Hudek hit Grebeck in the shoulder.

In the ninth, Paul Quantrill, known for his pin-point control, plunked Jones in the back, prompting a warning from plate umpire Rocky Roe.

"They have plenty of hot dogs over there," Jones said. "They retaliated and if they want to play that way that's fine. I just hope we meet in the World Series."

"I thught it was a classy move by the guys who did get hit, not to go out there," Fletcher said. "Carlos could have easily went out there, and the same with Jones."

Roy Halladay (7-3) relieved starter Chris Carpenter, who gave up five runs in 3 1-3 innings. Halladay gave up one run and two hits in 3 2-3 innings.

"Delgado had an idea why they did it," Halladay said. "Then they hit two of our guys. Quantrill hit one of theirs. And if they don't understand that, there's something wrong there."

"Tommy gave up a lot of cheap hits, we gave up two line drives and we gave up a grand slam," Atlanta manager Bobby Cox said.

The Braves, who have lost four straight, took a 3-0 lead in the first on Brian Jordan's two-run double and Javy Lopez's run-scoring double.

The Blue Jays scored twice in the bottom half on Green's RBI grounder and Tony Batista's RBI single.

Consecutive doubles by Lopez and Andruw Jones made it 4-2 in the third. Keith Lockhart hit an RBI single for Atlanta in the fourth, but the Blue Jays cut the lead to 5-4 in the fifth on Batista's RBI double and Cruz's run scoring single.

Jones homered in the seventh, his 23rd, to make it 10-6. The ball hit the top of the fence and bounced on to the field, but second base umpire Mike Everitt ruled it a home run.