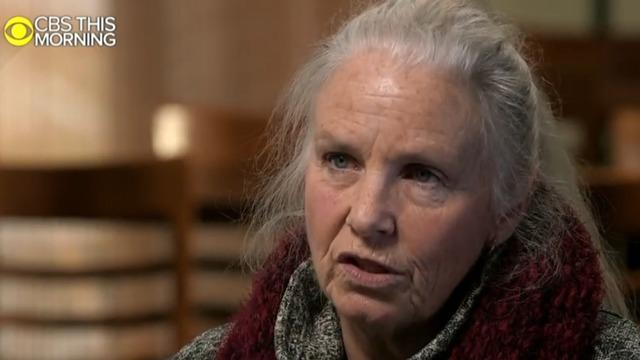 Former social worker Jeanne Nutter was walking her dog, Henry, when she encountered Jayme Closs, the 13-year-old victim of a kidnapping who had escaped her captor on Thursday. She had no idea where she was or what was waiting for her outside the home where she was being held in Gordon, Wisconsin.

"I was at the end of my driveway; I saw a young woman who appeared to be in distress," Nutter said. "She was probably about ten or 12 feet from me saying, 'I need help.' All I knew is, whoever this child is, she's in trouble."

Nutter says Gordon is a safe place where she doesn't think to take her cellphone before leaving the house.

So when Closs appeared, lost and needing help, they raced to a neighbor's home to call law enforcement.

"CBS This Morning" co-host Gayle King asked Nutter, "What did you see that made you think she was in trouble?"

"It was 19 or 20 degrees outside and she only had a sweatshirt on and maybe some black leggings, and I thought she was in her slippers," Nutter replied. "So, I figured she left wherever she had been in a hurry. A lot of things went through my head. I quickened my pace and got to her, and she just sort of fell into me and said, 'I'm Jayme.' And I said, 'I know.'"

"Did you recognize her right away?"

"Right away, because her pictures are everywhere," said Nutter. "Then my CPS, child protection brain really just clicked in, and what was going through my head is, 'Okay, I know your circumstances. I know what happened to you. I know the person you're with is potentially dangerous. My only responsibility is to get you to a safe place.'"

On October 15, Jayme's parents, Denise and James, were found shot to death. According to police in Wisconsin, the suspect, 21-year-old Jake Thomas Patterson, abducted the girl and took her to a secluded cabin his family owned in Gordon, some 60 miles north of her home in Barron.

Nutter said Closs pointed out the cabin to her and named the suspect right away.

She told King she didn't take the girl into her own house because it was too close to the cabin where she'd been held. "She told me that's where she had come from … Actually his property touches the back of our land. All of this happened so quickly. So in my mind I'm like, 'Don't take her there. It's just you and Henry. You only have one door. It faces the woods. You don't see the road.'"

"So you're thinking if he's following her, then it's just the three of you," said King. "Henry, you and Jayme?"

"Yeah, and there's no way out if he's at the back door," said Nutter. "All of that was going through my head, and it was just like, 'She needs to be in a safe place. Your cabin isn't safe.' And I didn't want her to know I thought my place wasn't safe, because I wanted her to be calm. I just [thought] safety, safety, safety. That's what we're trained [for] in social work. Kids need to be safe. Get them safe first, ask questions later.

"I was not calm inside, [but] I did not want her to know that," Nutter said. "So, I just practiced all my skills: Talk softly, don't ask her any questions. There are only a couple of questions I asked her. First of all, 'Where did you come from?' And she told me. I said, 'Is he home?' And she said, 'No.' I said, 'Is he in a car?' And she said, 'Yes.' And I said, 'What color is it?' Because if we ran into the car I wanted to have some other plan in my head."

It's that quick thinking that helped bring Jayme Closs home to a family overcome with gratitude. Nutter and Jayme's Aunt Lynn met for the first time on Sunday.

"Oh my God, I just wanted to meet you so bad," Lynn told her. "It's just amazing. I mean, you could have said or done anything, and you did everything so right."

When asked to describe her meeting Closs' family, Nutter said, "It was wonderful. I can only imagine what they've been through. Honestly, I feel privileged that I had this little piece of, you know, the puzzle of finding Jayme."

"She ran into you first, [and] thank goodness that you are a good person," said King. "But how do you process that for your own role in this?"

"That was my job that day, was to dust off your child protection skills and make sure you got this kid to safety," Nutter replied. "I just wanted her to know that she was gonna be okay. No matter what I did, that kid was gonna be safe."

Nutter said she felt blessed to see that her actions helped Jayme return to her family and start her journey to heal.

One piece of advice she can give to others: when you see someone in need, do something.