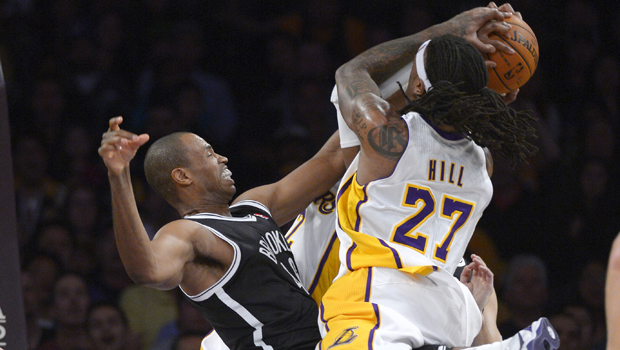 He entered the first game with his new team Sunday night just hours after signing a 10-day contract with the Brooklyn Nets, and he told reporters beforehand that his focus was on how he'd do.

"I don't have time to really think about history right now," he said.

The 35-year-old Collins revealed at the end of last season he is gay, but he was a free agent and had remained unsigned until Sunday. After his announcement last year, numerous NBA players insisted he would be welcomed in the locker room.

He quickly became a kind of ambassador for gay rights, speaking at the United Nations and attending President Barack Obama's annual State of the Union address last month as a guest of first lady Michelle Obama.

Speaking at a crowded press conference before his Sunday night game in Los Angeles against the Lakers, Collins said he was aware of the magnitude of his signing, but he said he was most concerned with learning the Nets' plays.

The crowd welcomed him with a nice ovation Sunday night.

Collins had played 12 NBA seasons before his announcement. He has played for five other teams and is well respected inside and outside the league.

"The decision to sign Jason was a basketball decision," Nets general manager Billy King said in a statement. "With his experience and size, we felt he was the right choice for a 10-day contract."

The Nets posted a photo on their Twitter account of Coach Jason Kidd watching Collins sign his contract, encouraging followers to retweet it to welcome Collins to Brooklyn.

"Jason told us that his goal was to earn another contract with an NBA team. Today, I want to commend him on achieving his goal. I know everyone in the NBA family is excited for him and proud that our league fosters an inclusive and respectful environment," NBA Commissioner Adam Silver said.

Since making his announcement last year, "Life is more exciting for me," Collins said. "I mean, I don't have to hide who I am and I can be my normal self. The past 10 months have been incredible. I'm making new friends, hearing different people's stories, sharing experiences. It's just been an overall positive."

"I know Jason Collins is a competitor. One thing I know about him is he fouls very hard," Miami's Dwyane Wade said with a laugh. "He's one of those tough veterans. I'm sure he's happy to be back playing in the league. Welcome back."