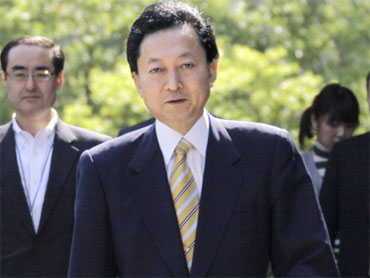 Embattled Japanese Prime Minister Yukio Hatoyama said Wednesday he was resigning over his broken campaign promise to move a U.S. Marine base off the southern island of Okinawa.

The prime minister had faced growing pressure from within his own party to resign ahead of July's upper house elections. His approval ratings had plummeted over his bungled handling of the relocation of the Marine Air Station Futenma, reinforcing his public image as an indecisive leader.

Hatoyama is the fourth Japanese prime minister to resign in four years.

Until Tuesday night, Hatoyama insisted he would stay on while intermittently holding talks with key members of his Democratic Party of Japan.

But on Wednesday morning, after eight months in office, Hatoyama faced the nation to say he was stepping down.

"Since last year's elections, I tried to change politics in which the people of Japan would be the main characters," he told a news conference broadcast nationwide. But he conceded his efforts weren't understood.

"That's mainly because of my failings," he said.

His government came to power amid high hopes in September after his party soundly defeated the long-ruling conservatives in lower house elections.

But his public image has tumbled amid a political funding scandal and perceived inconsistency and indecision, particularly on his reversal on Futenma. Last week he said he would go along with the 2006 agreement to move the base to a northern part of the island, infuriating residents who want it off Okinawa entirely.

Okinawa alone houses more than half of the 47,000 U.S. troops in Japan, stationed under a bilateral security alliance.

His three-way coalition was cut to two members over the weekend when a junior partner, the Social Democrats, withdrew after the prime minister expelled its leader Mizuho Fukushima, who rejected the Futenma decision, from the Cabinet.

Fukushima's dismissal enhanced her public standing as a politician who stood up for her convictions and reinforced perceptions of Hatoyama's wishy-washiness.

The Democratic Party of Japan and a remaining coalition partner still hold a majority in both houses of the Diet, or parliament - though just barely in the less powerful upper house.

Japan's largest newspaper, the Yomiuri, citing its own survey conducted, said Tuesday nine out of 43 upper house lawmakers from Hatoyama's party seeking re-election in July said Hatoyama's resignation ahead of the poll was unavoidable, while 13 others urged him to make his own decision.