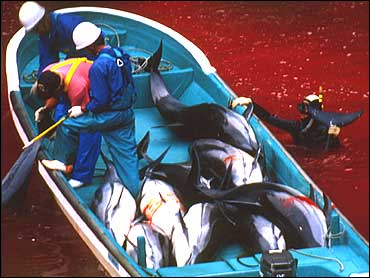 As children in inner tubes bob on the calm waters of this small ocean cove, a 550-pound dolphin zips through the crowd in pursuit of raw squid tossed out by a trainer.

Niru, a Risso's dolphin caught locally, seems unbothered by all the people and the squeals of surprise and delight. The cove is packed - it's a bright summer Sunday and hundreds of families have come.

But in two weeks, the waters of the cove will turn blood red, as it becomes a holding pen for annual hunts that capture and kill hundreds of dolphins each year.

The ancient village of Taiji, portrayed in the Oscar-winning documentary "The Cove," has a long and complex relationship with the dolphin. The film portrays the dolphin hunts as a sinister secret, cruel and dangerous because the animals have high mercury levels.

But the hunts are no secret in this village, where Risso meat sells for $10 a pound at the local supermarket. And the villagers are deeply and stubbornly proud of their centuries-old tradition, whatever Hollywood says.

"We will pass down the history of our ancestors to the next generation, preserve it. We have a strong sense of pride about this," Mayor Kazutaka Sangen told The Associated Press in an exclusive interview. "So we are not going to change our plans for the town based on the criticism of foreigners."

For Sangen, dolphins are no more special than other animals, and fishermen have the right to start their hunts when the season opens again Sept. 1. He emphasized that he didn't speak directly for Taiji's dolphin hunters, who number about 60 and hunt with the permission of the national and prefectural governments.

But to activists like Ric O'Barry, the "Flipper" trainer-cum-activist who stars in "The Cove," dolphins deserve to be protected because they are different from other animals.

"Dolphins have a brain larger than the human brain. They're self-aware, like people and like the great apes. They're not fish, chicken, cows, pigs or other domesticated animals," he said while in Tokyo to promote the movie in June.

The dolphins caught in the region are not endangered. In 2008, the prefecture caught 1,857 dolphins, far less than other parts of Japan, which allows about 20,000 to be killed each year. Taiji fishermen use a method called "oikomi" to hunt dolphins, banging on metal poles in their boats to create a wall of sound and herd them to shore, where they are harpooned for meat or captured alive as show animals.

Nestled around a small bay, the tiny town of 3,500 is suffused with a fierce independence. It has refused to join surrounding villages as they merge, and ignores criticism as it seeks to become an international whaling and cetacean research center.

This was the birthplace of Japanese whaling in the 1600s, and shrines to the animals dot the streets, with the history celebrated in a series of annual festivals. While dolphins can be playmates, they are primarily seen as big game animals - an idea many foreigners find difficult to stomach.

The Cove's success has thrust the town and its traditions into the international spotlight, with much of the attention negative. Local fishermen decline comment, saying their words have too often been twisted by foreign reporters.

The movie depicts a team of environmentalists with hidden cameras as they capture bloody footage of dolphins being slaughtered. The fishermen who try to block the film crew are presented as rough goons.

Sangen and other officials say that during hunts, the cove is the equivalent of a slaughterhouse, a gory place by nature and usually closed off from public view anywhere in the world.

"We just hope that this issue can be viewed in a more realistic way," says Katsutoshi Mihara, head of the town council.

Taiji's pride was on display at its annual whaling festival earlier this month, when two sleek rowboats full of men in red loincloths chased a 30-foot (nine-meter) mechanized whale around the main bay, its artificial blowhole shooting up jets of water. It is a re-creation of the old hunts, when 200 men in dozens of boats would set out with knives and harpoons to kill a whale, young daredevils diving into the sea to prove themselves against an angry leviathan 1,000 times their weight.

Crowds line the dock to watch the "hunt," then everyone settles in for a night of fireworks, which include giant sparkly whale and dolphin outlines.

Hayato Sakurai, a history curator at the local whale museum, says the town's past links the issue to its pride and sense of duty, though few are directly involved today.

Taiji residents also carry their history in their last names, which many Japanese adopted in the 1870s, usually based on their occupation. Twenty-five percent of the town is still named Ryono, which means "sea field" and was often taken by whaleboat rowers. Descendants of harpooners are named Seiko, after their pursuit boats, and lookouts became Tomi, literally "far seeing."

The Japanese debut of "The Cove" this summer turned into a battle over free speech, with nationalist groups intimidating cinemas into canceling showings even while intellectuals urged them not to back down.

The accuracy of the documentary, and the context under which people agreed to appear in it, have been hotly debated in Japan. Unlike the U.S. version, most faces are blurred out, with disclaimers added that those interviewed are not protesting or supporting dolphin issues.

Many in the town say they are unhappy with how they are portrayed. Councilman Hisato Ryono, who talks about mercury levels in the dolphins, says he was deceived about the film's content beforehand.

Louie Psihoyos, the American director, said that he was open about the subject of the film with those he interviewed, and complaints have only come after its success and the accompanying backlash against the town.

"It wasn't a film on dog walking. There is only one reason you go to Taiji - that's to film dolphin hunting. That's what we were doing," he told The Associated Press.

The success of the movie has emboldened activists and deepened their pockets. This year, the usual motley assortment of local English teachers, surfers and save-the-dolphin activists are likely to turn out in bigger numbers than normal to protest the hunts and perhaps scuffle with local fishermen. But a major nationalist organization also says it will go to "stop disturbances by Western white people," while a more liberal group is planning a "Peace Walk" in honor of Taiji.

Even the more sympathetic in the town government say protests are unlikely to cause any change.

"They're not going to stop the hunts," says Ryono.

Several years ago he helped raise the issue of high mercury levels in local dolphins, the meat of which was being fed to school children, an issue later covered in the movie. That practice was stopped and a national lab was called in to conduct ongoing mercury tests on Taiji residents. The results showed some abnormally high mercury levels in the villagers, but no ill effects have been found.

Local residents mostly roll their eyes when asked about the film. Many, such as Sen Morimoto, 61, a former firefighter, are more worried about the future of the town as its younger generations leave for broader pastures - two of his three children have moved away, and the third says business at the local auto company where he works is worsening.

Mayor Sangen says that most people in Taiji are unconcerned about "The Cove" or the protests.

"People here really don't care about this," he said. "They've been living the slow life for 400 years. Even if foreigners suddenly appear, and Japanese, waving flags and saying 'it's terrible, it's terrible,' we've always eaten this way."
By Associated Press Writer Jay Alabaster