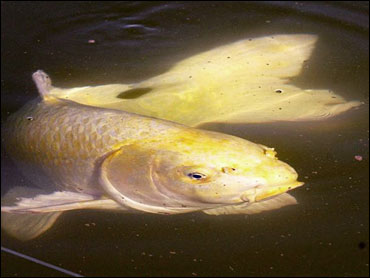 A herpes virus that has decimated Japan's carp farms is spreading, officials said Thursday, as they battled to contain the country's first known outbreak of the fish disease.

Since October, farm-bred carp in Lake Kasumigaura and Lake Kitaura in eastern Japan have died en masse, threatening the lakes' annual catch. On Sunday, fisheries officials in Ibaraki prefecture (state), where the lakes are located, had estimated the amount of dead fish at 860 metric tons (946 short tons), equivalent to 150 million yen (US$1.4 million) of losses for fishermen.

By Thursday, there were 1,124 metric tons (1,236 short tons) of dead fish, or roughly one quarter of the prefecture's annual supply to retailers, Watanabe said. Fishermen's losses have grown to 280 million yen (US$2.55 million), he added.

Ibaraki is just northeast of Tokyo.

Nine other prefectures — as far south as Fukuoka and Miyazaki prefectures on the southernmost main island of Kyushu — also reported that the virus had turned up in dead fish. Fisheries officials there is no known cure; 90 percent of all infected fish die, they said.

Takaji Iida, a scientist at the private Fisheries Research Agency's National Research Institute of Aquaculture in western Mie prefecture, said a national panel of experts was investigating the cause.

"Based on the current situation, it's possible that the infection spread from carp in Lake Kasumigaura. We can't just assume that the virus came from somewhere else," Iida told reporters.

Although biologists doubt the disease can be transmitted to people who eat infected carp, officials urged retailers to remove carp from their display refrigerators for now.

Another Ibaraki prefectural official, Manabu Mashiko, said fishermen had been ordered to bury all dead fish.

First detected in Israel in 1997, the virus has spread to carp in other countries, including Britain, Germany, Taiwan, Indonesia, the Netherlands and the United States. It is thought to have killed carp in the Great Lakes of the United States in 2000.

The virus appears to be transmitted between fish by direct contact or from mud, nets, buckets, parasites, plants or water. It targets the gills, and death is fast.

In July, Japan imposed restrictions on carp imports in an attempt to prevent a viral outbreak here.

Carp, known as koi in Japanese, are prized inhabitants of ponds, parks and water gardens. They are also raised and sold to restaurants that specialize in koi cuisine.

The outbreak in Japan, though limited, has fishermen worried that carp sales may plunge.