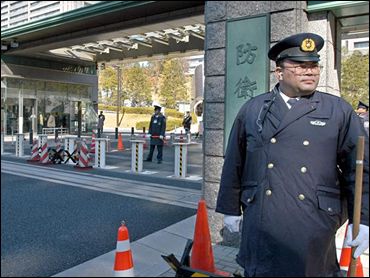 The official, speaking on condition of anonymity, refused to say whether the government had new information about a possible terror strike. He said it was the highest show of security in Japan since the U.S.-led invasion of Iraq in March 2003.

The tougher security comes as Japan is dispatching troops on a humanitarian mission to Iraq. The alert also follows a failed attempt to hit the Defense Agency with projectiles earlier in the week and came ahead of the verdict in the trial of a cult leader accused of plotting the 1995 nerve gas attack on the Tokyo subways.

The security move sent a shiver through global financial markets, knocking the Japanese yen to 10-week lows against the U.S. dollar.

The National Police official said riot police armed with automatic rifles would guard Tokyo and Kansai international airports and nuclear power and reprocessing facilities, but wouldn't disclose how many officers were added.

Larger police forces were being mobilized and additional checkpoints set up around the prime minister's residence, the U.S. Embassy, military facilities and national and local assembly buildings, the official said. Security was also strengthened at ports, railway stations and shopping malls.

In Washington, White House spokesman Scott McClellan said Japan was tightening security ahead of sending troops to Iraq. Japan dispatched a destroyer and an amphibious vessel for the Middle East on Friday.

"Japan for the last few weeks has been taking some measures to improve the police preparedness as they prepare to deploy troops to Iraq," he said. "Japan has kept us apprised of the measures they are implementing."

"The measures they are implementing are relating to police preparedness," McClellan added.

Japan is sending 1,000 air, sea and ground forces for the mission in Iraq, its largest military deployment since World War II.

Many fear that the dispatch could draw terrorist attacks in Japan, and last November an alleged al Qaeda operative threatened to attack Tokyo if it sent troops to Iraq. Japan issued a series of travel advisories and alerts for citizens living abroad late last year.

The heightened security came after an apparent attempt to fire projectiles at Japan's Defense Agency on Tuesday. Two blasts were heard near the Agency, and police later found two projectile launchers. There were no injuries or damage, but local media reported that a leftist group opposed to Japan's Iraqi mission had claimed responsibility.

The move also comes ahead of the verdict next Friday in the case of Shoko Asahara, the former leader of the Aum Shinrikyo cult that carried out the 1995 sarin nerve gas attack on the Tokyo subways that killed 12 people.

Police earlier this week raided offices of the cult, now named Aleph, over worries it could be planning reprisals if Asahara is convicted. Prosecutors have demanded the death penalty.

News of Friday's alert hurt the yen against the dollar. In New York, the dollar surged above 109 yen for the first time since Dec. 2, sharply higher than the 107.91 yen it traded late in Tokyo on Friday and also above the 107.15 yen it was at late Thursday in New York.

Beginning in late December, police tightened security at hundreds of facilities nationwide during the New Year holidays, and officers went on round-the-clock watch at train and subway stations and shipping docks. But the precautions were later eased.