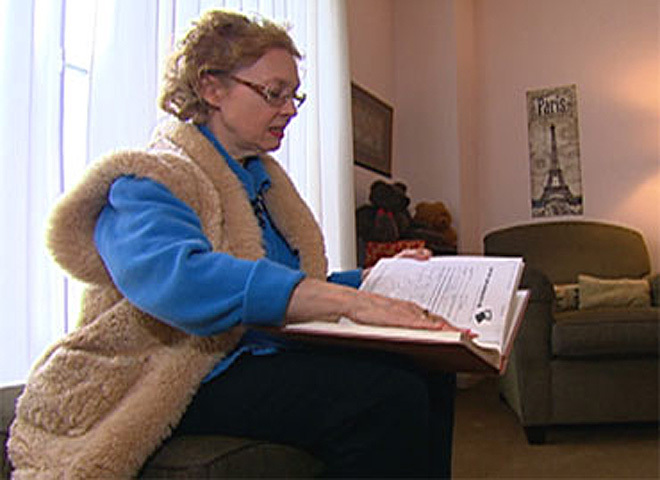 (CBS News) JAN'S STORY is a painful story to tell, particularly for the only man qualified to tell it . . . our own Barry Petersen:

In the 1980s, Jan Chorlton was a promising television reporter. She went on to work for CNN, ABC, even "CBS Sunday Morning."

She was lively, daring, one of those people who celebrated life.

But at only 40 years old, the subtle changes began . . . the lapses in memory.

Five years ago, when she was 55, she received a diagnosis both awful and heartbreaking. Jan had Alzheimer's disease.

It has moved so fast that she is now in an assisted living facility, where this once bright, articulate woman struggles to make sense. It can be painful to watch.

How does she feel about being there? she's asked.

"I will go to get her for lunch and she will be talking quite animatedly sometimes," Pring said. "And I will go in and she's talking to the mirror. She's very concerned about whether the person in the mirror is going to come with us to lunch. She will say, 'What about her?' And I'll say, 'Just you and I, we're gonna go sit and have lunch together.' And she'll say, 'Oh, okay.' And she always makes sure she says goodbye to the person in the mirror."

For me, this is not just another piece of journalism. As I will explain in a moment, this is personal.

But to understand the tragedy of Jan, you must understand Alzheimer's, and what happens when it strikes one so young.

Dr. Galvin is professor of neurology and psychiatry at New York University's Langone Medical Center. He says most Alzheimer's patients are in their seventies and eighties, but it can also strike as young as 30, when it is called early or younger-onset Alzheimer's.

"There are about 250,000 Americans who have the disease before age 65," said Dr. Galvin. "These numbers will likely increase as doctors are becoming more and more aware of the problem and are better able to detect the disease at the earliest stages.

The first thing to know about Alzheimer's is that there is no cure. The second: There is no known cause.

And even worse, says Beth Kallmyer, a senior director at the Alzheimer's Association, there's no evidence that shows that you can prevent Alzheimer's disease.

"You can't do a million crossword puzzles and that'll help you?" asked Petersen.

"Right now, what the research is showing us is that you cannot stop it by doing certain things," said Kallmyer.

And as baby boomers age, the problem will get far worse. Right now, some 5 million people have it. By mid-century, that number is expected to triple.

"Every decade after 65, the risk of developing Alzheimer's roughly doubles," said Dr. Galvin, "so that by age 85 approximately 50 percent of the population is affected."

And Dr. Galvin says that Alzheimer's lags behind other major diseases in research money.

That reality haunts Pat Van Dyke. On an outing to the Dallas Museum of Art for people with Alzheimer's disease, she seems out of place . . . too young for an illness usually associated with old age.

Her early onset was diagnosed six years ago, at age 52.

Still in its early stages, she stays active - hurriedly cramming in life experiences, like cruises and trips to Europe.

"I know every day my time is getting shorter," Van Dyke said. "And I just need to do everything I can while I can. Enjoy it. Enjoy life. And I do. I really do."

For Pat, the hardest part may be ahead, when the ravages of the disease will likely force her into a long-term care facility, and she says that she will NOT want visits from the granddaughters she so cherishes, "because I don't want them to see me like that."

"Them seeing me and not knowing them, not recognizing them. I don't want them to see that," she said. "That I don't know who they are. I mean, that's very hard for somebody."

The future for Pat may look a lot like the present for Jan Chorlton. As I mentioned earlier, for me Jan's story is both personal and painful, a story this reporter never expected to tell.

Jan Chorlton Petersen is my wife.

Jan loved me without measure. She was all I wanted in this life. It was a love affair that had a beginning but was never supposed to end. That is what this horror of a disease stole and destroyed.

Jan and I were married in 1985. CBS posted us to Tokyo and Moscow, on to London and back to Asia. One of the things I loved most about her was how she embraced each new city as a new adventure.

She did all that with a Barry who is now a fading memory, who lives for her in the third person.

She said to Barry, "And then sometimes when I get too teary, because I do love him and I just couldn't be without him."

And no matter how often it happens, nothing and no one can soften the agony when she has no idea that the man sitting with her, holding her as tightly as I can, is that same Barry.

In the first years after diagnosis, I cared for Jan myself at home. As she got worse, I hired a live-in caregiver.

Finally, when her anger and confusion were slipping out of our control, I moved her into an assisted-living facility, where on each painful visit I see the changes as she disappears a little more.

A friend calls it grieving, like saying goodbye by going to the same funeral over and over again.

"Because it's such a long process and a long road that a family travels down together, it changes family dynamics," said Pring. "And it takes away all our preconceived notions about how families should look and how they should function."

"I know that he will always be in my life," Jan said.

And Jan will always be in my life. But life continues. I learned from Jan early on to treat each day as beyond value, which presented me with one of the most difficult decisions I've ever had to make . . . when I met Mary Nell.

"The reality is I am a widow," said Nell. "The reality is that he is married to a woman that doesn't remember him. And so we exist in our own universe of this very peculiar new American family."

Mary Nell lost her husband of 22 years in an accident. We now live together. And before you judge us harshly:

"This truly is a case of having to walk in someone's shoes before you make a judgment about how you would react and respond in similar circumstances," she said.

Together, we visit Jan, and together we watch over her. Mary Nell understood from the beginning that ours is a relationship of three because it will always include Jan, the woman Mary Nell now calls her friend.

"Well, when you meet Jan you can't not love her," Nell said. "She is vivacious and open and warm and friendly, and it just is heartbreaking that this has happened to her. And if I loved Barry I couldn't not love Jan."

And I vowed that Jan's life would not be lost in the wasteland of Alzheimer's. So I've written "Jan's Story" (Behler).

It is also a forewarning, because millions more may soon be on my same sad journey, as Alzheimer's triples by mid-century.

The Jan I knew is all but gone to me now, but I remember what she always taught me . . . to embrace life.

This week on "Sunday Morning" (October 2)
Thanks for reading CBS NEWS.
Create your free account or log in
for more features.
View CBS News In
CBS News App Open
Chrome Safari Continue
Be the first to know
Get browser notifications for breaking news, live events, and exclusive reporting.