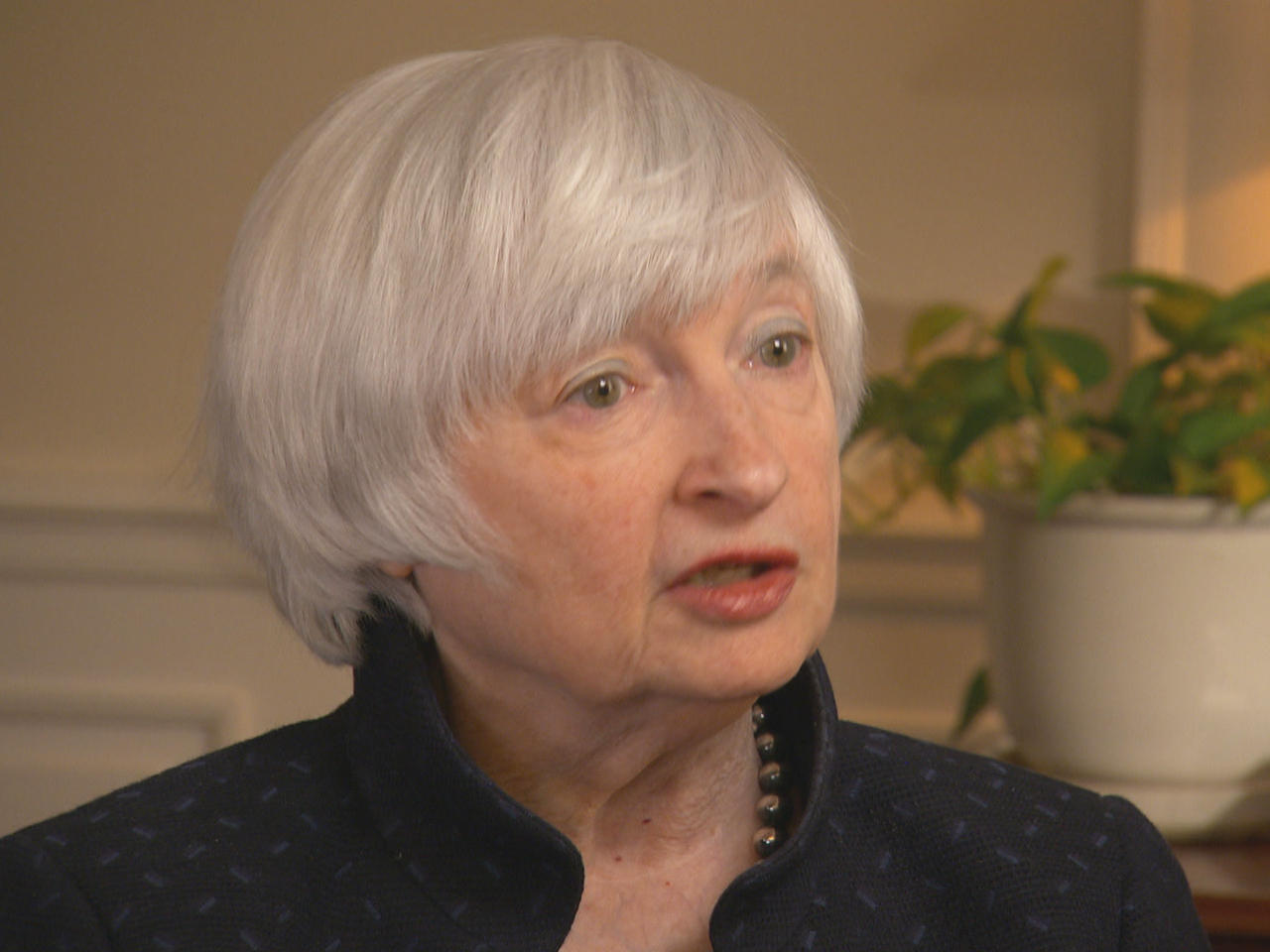 Jobs and wages up, stock market down. The economy was a particular MATTER OF INTEREST this past week, all the more so because Friday was Federal Reserve Chair Janet Yellen's last day on the job. Rita Braver conducted our exit interview:

When Braver caught up with Janet Yellen on Friday, the boxes were packed and she was almost out the door. "I'm ready to go," she said.

"It must be a bittersweet moment."

"It is a bittersweet moment, because I really love this job. It has been the central focus of my life.  You know, I enjoy time with my family outside of work.  But the work I do here is the core of my existence, and it's been my identity."

"It's gonna be a big change," Braver said.

Yellen was born in Brooklyn. Valedictorian of her high school class, the only woman to get a Ph.D. in economics from Yale in 1971, she worked in government and as a university professor.

She also made history.

She showed Braver the Federal Reserve's Portrait Room, with oil paintings of all of the former Fed Chairs.

"Who all just happen to be men?" Braver noted.

"Well, they do happen to be men," Yellen said. "But I'm hoping to find a place for myself eventually on that wall!"

"Knowing that you were the first woman to have this job, did you put extra pressure on yourself, do you think?"

"Well, I've tried to do a good job, and I suppose a theme of my life is that I try to be prepared and to get good grades. Yes, I do want to show that women can perform well in these positions."

And by most accounts, she has. Numerous Republican Senators voted against her confirmation and it was an open secret that she was not the leading candidate for the job; Larry Summers was widely believed to be President Obama's first choice for the job.

But, since Yellen took the helm in 2014, in the midst of the recovery from the Great Recession, the economy has steadily strengthened, in large part through decisions reached in the Federal Reserve boardroom.

Braver said, "This is arguably the most important economic conference room in the entire world."

"I think that's actually a fair assessment," Yellen replied. "The policymakers and senior staff sit around this table, and we sometimes disagree, but we're not disagreeable."

Under Yellen's leadership, the Board slowly raised interest rates, and also slowly started cutting back on bonds and other assets the Fed bought up to ease the recession.

"The labor market has become stronger," Yellen said. "I believe that since I've become Chair, several million jobs have been created, [something] on the order of ten million."

Yellen is used to debating economic policy, even at home.  Her husband, George Akerlof, happens to be a Nobel Prize-winning economist.

And believe it or not, they met at the Fed, where they both did a brief stint in the 1970s.

"This is a Fed love story?" asked Braver. "Your husband said of you, 'Not only did our personalities mesh perfectly, but we have always been in all but perfect agreement on macroeconomics.' Now, that just sounds so romantic! He could've just said 'Zing! went the strings of my heart,' or something like that, right?"

Yellen laughed: "Well, we decided to get married very quickly, and I think we were quite sure that we were right for one another."

And there is no question he loves what she did as Fed Chair.

Braver asked Akerlof if what Yellen did as Fed Chair always make sense to him?

"The things Janet does always make sense," he laughed.

Which raises the question of what will happen when Yellen leaves.

It's not a voluntary departure; she was a frequent target of Donald Trump during the 2016 campaign. ("Janet Yellen of the Fed … The Fed is doing political -- by keeping the interest rates at this level").

Later, the president praised her. ("Janet Yellen, a wonderful woman who has done a terrific job.")

Braver noted, "But he didn't reappoint you.  Were you disappointed when you learned that you were not going to get a second term, as almost everybody else has?"

"Right, so it is common for people to be reappointed by presidents of the opposite party," Yellen said. "I made clear that I would be willing to serve another term, and so yes, I do feel a sense of disappointment.

"But look, I've been in high level positions in the Federal Reserve for many years, where I think I've had a seat at the table to make the arguments that I thought needed to be made and to advocate for good policy."

Yellen, a Democrat, will be succeeded by Jerome Powell, a Republican, but someone who has been described as her protégé.

Braver said, "People say that you're supportive of him.  Is that true?"

"I am supportive of him.  I've worked with Governor Powell for five years, very constructively. He is thoughtful, balanced, dedicated to public service. I've found him to be a very thoughtful policymaker."

Still, Yellen fears that some of the policies she championed are in peril.

The House has passed a bill that would curtail the Fed's independence when it comes to setting interest rates; and there is also talk of rolling back regulations the Fed imposed on banks after the economic collapse.

"They are now much safer, much sounder, and much better at managing their risks," she said. "And it would be a grave mistake to roll that back."

And on Yellen's last day in office, the Fed flexed its muscles, slapping Wells Fargo with unusually harsh penalties for "widespread consumer abuses."

As for whether Yellen's view that the stock market (which plummeted on Friday) has been too high in recent months:

"Well, I don't want to say too high.  But I do want to say high. Price-earnings ratios are near the high end of their historical ranges.  If you look at commercial real estate prices, they are quite high relative to rents.  Now, is that a bubble or is too high?  And there it's very hard to tell.  But it is a source of some concern that asset valuations are so high.

"What we look at is, if stock prices or asset prices more generally were to fall, what would that mean for the economy as a whole?  And the financial system is much better capitalized. The banking system is more resilient.  And I think our overall judgment is that, if there were to be a decline in asset valuations, it would not damage unduly the core of our financial system."

"We're in the ninth year of a recovery; can it really keep going like this?" asked Braver.

But for now, Janet Yellen departs, feeling that she's leaving the economy stronger than she found it -- and exiting a job she dearly loved, among people who seemed to love her.

To applause in the Federal Reserve cafeteria, she laughed, "Last opportunity for lunch!"