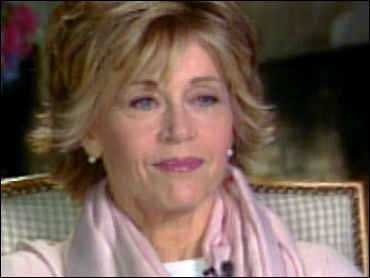 After 60 Minutes ran the first part of its interview with Jane Fonda last week, which was cut short by coverage of the death of Pope John Paul II, the show received more mail than usual – most of it angry.

Fonda still stirs that kind of emotion for her trip to Hanoi during the Vietnam War. While she defended most of what she did on that trip in her interview with , she apologized in the broadcast for one thing: posing at an anti-aircraft gun the North Vietnamese used to shoot down American pilots.

In her new book, "My Life So Far," and in Part II of her interview with 60 Minutes, Fonda acknowledges that while she could be outspoken on the public stage, as she was in Vietnam, she was close to timid with her husbands –- first with French film director Roger Vadim, and then with political activist Tom Hayden.

But if she failed in her personal relationships, her professional life has been a dazzling string of successes, one after another.

In 1979, she started "The Workout," which sold nearly 17 million copies. She says she used the proceeds from "The Workout" to fund the various causes she and Hayden supported. In fact, for many years, she didn't even own the business. Their political organization did.

"We structured it that way, so all the money from 'The Workout' went into the organization," says Fonda. "I think $17 million."

How did Hayden react to "The Workout"? "He hated it," says Fonda. "He hated 'The Workout.' He thought it was all about vanity. And, so even though, you know, it put a lot of money into our political work, it felt like a wedge for him, between the two of us."

On her 51st birthday, Hayden told her he had fallen in love with someone else. "And my life collapsed," says Fonda, who had a nervous breakdown. "I couldn't speak above a whisper. I couldn't walk fast. I felt like blood was coming through my skin. I felt like I'd just found out I'd been adopted."

After 17 years of marriage, and having a child together, they divorced. On the day after it was announced in the papers, Ted Turner called from out of the blue.

"The phone rings, and it's this booming Southern accent. And the first words out of his mouth were, 'Is it true?' 'Is what true,' I said, thinking this was really a weird way to start a conversation," recalls Fonda. "And he said, 'Are you and Hayden getting a divorce?' Now, I mean, I'm in the middle of a nervous breakdown, right? I can't talk above a whisper."

She wasn't ready, but when Turner called back three months later, he put on the charm. "He went after me and dropped on his knees, recited poetry that he'd written in high school," says Fonda. "I mean, it was irresistible. And then he'd come out with something like, 'The only problem is you're too old.'"
How did she go from living in "the shack" with Hayden, to marrying a billionaire, who at the time had 23 homes, without completely losing herself?

"You can get used to being taken care of very fast," says Fonda, laughing. "I mean, it doesn't take much."

"I'll bet," says Stahl. "But you know, I look from the outside at this marriage and I say, 'Jane Fonda did it again. She allowed a man to change her.' "

"In a positive way, yeah. I mean, I know I'm a chameleon in some ways. I mean, you know, I was going to all these receptions. …He goes from one thing to another. A lot of tuxedos, a lot of gowns, on the arm of corporate executive," says Fonda.

"What was really going on though was very, very different. What was going on was he gave me confidence. Ted Turner would wake up every morning and say, 'I love you so much. You are so beautiful.' And I would think, 'Well, he's no dummy. Gee whiz!' "

And yet Turner wanted her to give up her movie career, which she says she happily did. But generally, she was subsumed, as she had been with Vadim and Hayden, into her husband's life. And she now blames that "disease to please," as she puts it, on a difficult childhood. First off, her mother committed suicide when Jane was 12.

"She had been institutionalized and the last time she came home with the nurse, the nurse was there to keep her from doing this," says Fonda. "But she got away from her nurse and went up and got a little lacquer box that had a razor in it, and she went back to the institution, and cut her throat."

Her father never spoke to her about the death. She writes that Henry Fonda, so beloved as an actor, was a man of dark moods and rages at home, and that she spent much of her life trying to reach him, even producing the movie "On Golden Pond" explicitly so he could win his first Oscar.

Their relationship in the movie, she writes, was close to the real one they shared. She says that Henry Fonda was as cold to her through the making of the movie as he had been when she was a little girl. At the age of 15, she developed bulimia, sometimes binging and purging up to eight or nine times a day. This went on into her 40s.

"My husbands never knew. And my children never knew. It's a disease of denial," says Fonda. She was into denial about a lot of things until six years into her marriage with Turner, when she was 60. She felt something was missing, and turned to Christianity, even though Turner had called it "a religion for losers," for which he later apologized.

"I had become a Christian and I had not told him," says Fonda, who says it's one of the reasons that the marriage broke up.

Why didn't she tell him? "It's not fair. It wasn't fair at all," says Fonda. "I was yearning for the spiritual that I had not had. And I knew that if I told him or asked him before I did it, that he would talk me out of it."

Her marriage to Turner ended, but she decided to stay in Atlanta, where she lives alone in a spacious loft, decorated with Andy Warhol's portraits of her. She told Stahl that she continues to see Turner, whom she calls her favorite ex-husband.

"We're not public. Not most of the time, anyway," says Fonda. "But no, but we see each other. He comes to my ranch and goes fishing. And occasionally, I'll have dinner with his main girlfriend."

Fonda has had dinner with Turner's girlfriend? "When you have real closure in terms of, 'Do I want to be married anymore?' And you know that you don't, but your DNA is saturated with him, because you care so much about his well-being, then why not embrace the girlfriend?" says Fonda.

Fonda says that Turner's girlfriend before her gave her a little booklet called the "User's Manual." It included, Fonda says, "all the tips about how to handle him."

Last year, Fonda returned to Hollywood to make her first movie in 15 years: "Monster in Law," which hits theaters next month.

Making the movie also gave her a chance to spend time with Troy Garity, her son with Hayden, who followed her into acting. Part of her new life is an effort to make up for her having been an inattentive mother, especially with her firstborn, Vanessa Vadim, whom she says she neglected as a child.

"I didn't show up for her. I was away a lot, and it's one of the great regrets of my life, and she and I are still working on that," says Fonda, who doesn't know if her daughter has forgiven her yet.

Fonda also spends time with her daughter, LuLu, who she unofficially adopted. LuLu, who was raised by Fonda and Tom Hayden, disagrees that Fonda wasn't a good mother: "She was an incredible mother to me, a life-saving, I mean, the only mother I had from a very small age."

"Well, but I was older. I was older," says Fonda. "I was starting to find myself."

It's a process she says she's still working on, as she moves through what she calls the third act of her life.

How does she feel about getting older? "I feel like a jalopy. I'm losing fenders and hubcaps. I've got arthritis," says Fonda. "Ted called the other day and said, 'If you were a horse, we'd trade you in.' "

But Fonda, without a man for the first time in her life, says she has never been happier. Does she think she'll get married again?

"I have no idea. I have learned never to say, 'I'm never going to do it again,'" says Fonda. "That's what I said about movies."

"You're not going there," says Stahl.

Going to college with a “Hope” scholarship