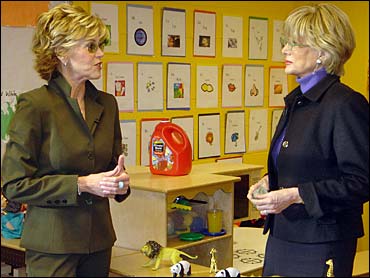 In her lifetime, Jane Fonda has made a significant mark on American culture. With her movies, her workout videos, her political activism, and her famous marriages, Fonda has captured headlines in every decade for the past 40 years.

She has been the envy of women seeking the perfect form, and the bitter enemy of Vietnam veterans who resent her every move, ever since she paraded around North Vietnam in protest of the war.

Now, she has written a book about all of it, and she has done an interview with that, like the book, is sometimes painfully candid and honest. You'll hear her apologize for some of what she did in Vietnam, and talk about her sometimes strange, wild and complicated marriages.

Today, the workout queen is 67, the grandmother of two, and still glamorous and beautiful. She lives in Atlanta, and spends much of her time on a program in the schools that she began, with her own money, to persuade teenage girls not to get pregnant, and to teach girls who are pregnant how to be better mothers.

"I wish that I'd been able to have a class like this when I had my first kid, 'cause I was not a good mother," says Fonda. "And then, you end up paying for it later."

"If you don't have a parent or an adult, a teacher or a mentor … really see you, really love you, 'Yes, there are things you do I don't like, but you're fantastic, you're good enough. I love you.' If that never happens to a child, the child assumes it's her fault and tries to compensate for it," says Fonda.

"And plus, all the other things that happened in my life made me infected with the disease to please. Not with women – I'm fine with women, but with men. 'Whatever you want, honey, I'll become.' … That was me."

It's a story spun out in her book that she wrote herself, called "My Life So Far." She tells all about her career as an actor, including her first big hit, "Barefoot in the Park" with Robert Redford.

She was big box-office, and made a total of 50 movies. But she says she had trouble standing up for herself in her personal life: "You know, I'm a very brave person. I can go to North Vietnam, I can challenge my government, but I can't challenge the man I'm with if it means I'm going to end up alone."

She readily admits that she allowed each of her three husbands to reinvent her, starting with Roger Vadim, the French film director who turned her into Barbarella, a sexy sci-fi secret agent, with an emphasis on sexy.

"When you look at 'Barbarella' now, are you embarrassed by how you looked in that movie?" asks Stahl.

"No, no, for a long time, I couldn't look at it," says Fonda. "I thought that it was politically incorrect, you know."

"She was a sex symbol, she was a pin-up symbol," says Stahl. "You can't get away from it."

"Yeah, but I can look at it now and laugh at it, and find it very charming," says Fonda.

She's come to see Vadim's "Barbarella" with a sense of humor, but her off-screen, private life with him is another matter.

Fonda says that sometimes she solicited the women herself: "If that's what he wanted, I'd give it to him in spades. I wasn't going to write about it. I got enough enemies, right? There's enough people who don't like me. I'm not going to go into this."

When asked why she would write about such private matters, Fonda responds: "Because I knew that if I didn't really fess up about how far I went in the betrayal of my heart, that it would not make the journey that I've been on, to where I am now, as important and as poignant." Her marriage with Vadim ended, and she threw herself into political activism.

In her book, she says that she winces when she sees video of herself back then. She wrote: "Watching myself, I want to shout, 'Will someone please tell her to shut up!'"

That's when she met Tom Hayden, a star of the anti-Vietnam war movement, and married him. And when she did, she lurched into his very different lifestyle. She moved into a small house, which her father called "the shack," and she didn't have a washing machine.

"Yeah, it was a period of time when you showed your political purity by living, you know, in a way that made my teeth grate, to tell you the truth. It was hard. It was hard," says Fonda. "I mean, if I put a picture up on the wall of my bedroom, the nail would come through the other side."

"You were making good money and you're living like that," says Stahl.

"Well, we were giving the money away. We had to support an anti-war movement," says Fonda. "Why spend it on yourself when people are dying, and there's a war going on? It was a crisis."

Some of the money went to their travels across the country, protesting the war and meeting with Vietnam veterans, and to pay for Fonda's 1972 trip to Hanoi, the enemy capital. She earned the epithet "Hanoi Jane" and the eternal hatred of many veterans when she visited an anti-aircraft gun site used to shoot down American pilots.

It's something that Fonda now says she regrets. "I will go to my grave regretting that. The image of Jane Fonda, Barbarella, Henry Fonda's daughter, just a woman sitting on a enemy aircraft gun, was a betrayal," says Fonda.

"It was like I was thumbing my nose at the military. And at the country that gave me privilege. It was the largest lapse of judgment that I can even imagine. I don't thumb my nose at this country. I care deeply about American soldiers."

But many of those soldiers say if there's one thing they will never forgive her for, it's that she met with a group of seven POWs when she was in North Vietnam, giving the appearance of a staged event at their expense.

"Was that a lapse of judgment?" asks Stahl.

"No. There are hundreds of American delegations that had met with POWs. It was not uncommon at all," says Fonda.

"Does that make it right?" asks Stahl.

"But the Vietnamese used it as propaganda, to say, 'Look how humane we are,'" says Stahl.

"Well, both sides were using propaganda, were using the POWs for propaganda," says Fonda. "I don't think there was anything wrong with it. It's not something that I will apologize for."

Nor does she apologize for making broadcasts on Radio Hanoi. "Our government was lying to us, and men were dying because of it," she says. "And I felt that I had to do anything that I could to expose the lies, and help end the war. That was my goal."

She asked the Vietnamese if she could make the broadcasts, tapes which 60 Minutes found at the National Archives in Washington.

Fonda went on Radio Hanoi at least 10 times, speaking directly to U.S. pilots, after she had toured the bombed-out countryside and visited hospitals full of injured civilians.

Was she trying to get soldiers to stop the bombing, and disobey their orders? "No. I know that you cannot ask a soldier to disobey orders," says Fonda. "You're not the one that pays the consequences."

"Doesn't that sound like you're asking them to stop what they're doing?" asks Stahl.

"But the soldiers who call you 'Hanoi Jane' and are still furious at you, say it's one thing to protest here in the country, and another thing to go over there, where our soldiers were, you know, in harm's way, and go into the enemy camp," says Stahl. "I mean, it wasn't like you were saying, 'Richard Nixon, stop this.' You were saying [it] to the pilots."

"Listen, we'd been saying to Richard Nixon, 'Stop this' for eight years. Millions of people had protested. You know, students had been shot at Kent State and still it went on," says Fonda. "It needed what looks now to be unbelievably controversial things. That's what I felt was needed."

"When you hear of this intense fury at you … 30 year later, does it hurt you?" asks Stahl.

"It makes me sad. It makes me sad, because I think that it's ill-placed anger," says Fonda. "I understand that I'm a lightning rod, and I know why the anger is there."

"What if a young, famous actress went to Iraq, hooked up with the insurgents today, and went on their radio and spoke to our soldiers over there?" asks Stahl.