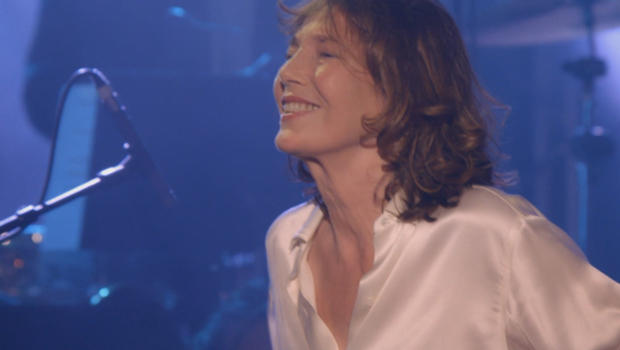 Actress and singer Jane Birkin is reviving her singing career ... and looking back with Anthony Mason:

She was one of the most photographed women of the Sixties … and the voice of perhaps that decade's most scandalous song. But Jane Birkin may be best known for the highly-desirable Hermes fashion accessory that bears her name:

"And when I went to America in an interview they said, 'You mean Birkin, like the bag?' I said, 'Well, now, the bag is going to sing!'"

"It's so funny that, after all this, you might be known for a bag," said Mason.

Birkin first gained notice in Michelangelo Antonioni's 1966 classic "Blow Up," when she romped naked across the screen. She was just 18 and already married to John Barry, the arranger of the James Bond theme.

But then he left her: "It was a disaster," she said. "And I was left with my daughter, Kate. I thought I hadn't been capable of holding onto the man I loved. And that, at 19, 20 years old, is terrible. I had no confidence in myself."

She went to Paris to audition for a film called "Slogan" and was paired with Serge Gainsbourg.

Mason said, "And from what I gather, it was not love at first sight?"

"No. Suddenly, I come trundling in with an English accent, can't speak French. And he thought, 'What's this?' What's more, I called him bourguignon. God knows why! It's cause I didn't know any other French!"

"Did you call him that to his face?"

But she got the part, and the man, who was building a reputation as the French Bob Dylan.

To watch a trailer for the 1969 film "Slogan" click on the video player below:

"No. I thought, 'Gosh, if he'd been in love with the most beautiful woman in the world (which was Bardot at the time) and if he could take a look at me…' To the contrary!"

Gainsbourg had written a song for Bardot that he now wanted Birkin to sing, "Je t'aime… moi non plus":

The moaning may seem tame today, but in 1969 it was incendiary.

When asked what she makes of the controversy over "Je t'aime...," Birkin just laughs. "Oh, nothing."

She recalls the reaction the first time she heard it played in a Paris restaurant: "We saw all the knives and forks in the air like that. And Serge said, 'I think we've got a hit record.' Then the Pope goes and bans it. And the BBC. It was in the bag!"

"Best publicity you could get," said Mason.

For 13 years, Birkin and Gainsbourg were an inseparable "It" couple … songwriter and muse … until his drinking problem fractured the fairy tale: "So, suddenly a beautiful boy comes along, and what's more found me interesting. Whereas it was always for Serge, for Serge. He was the great man. I suppose I wanted to be noticed."

That "boy" was French director Jacques Doillon, who asked her to play a depressed wife in his film "The Prodigal Daughter" ("La fille prodigue"). "No one had ever asked me to psychologically take over a part like that," she said. "And to have a shirt buttoned up to here, the rest didn't interest him. And then, voila!"

She moved in with Doillon and they had a daughter. But Serge stayed in the picture, still writing songs for her, until his death in 1991.

"And when Serge died, everything else collapsed," she said. "Nothing was really the same again."

Birkin and Doillon split, and she focused on her three daughters.

"You feel as if someone's pulled the carpet from under your feet," Birkin said. "You didn't see it coming. I saw it coming on many other occasions, and I'd been able to be there and … I don't know. But this time not. It took my confidence away completely."

"Is your confidence coming back?" Mason asked.

"No. The confidence is one, tiny thing. But she's irreplaceable. And the lack of her will be forever."

"You have two other lovely, successful daughters who you must be very proud of."

Charlotte Gainsbourg is a renowned actress and singer, and Lou Doillon has won the French Grammy.

At 71, Birkin has begun to find her way again, touring the world performing Serge Gainsbourg's songs with an orchestra. Next month, for the first time, she will play Carnegie Hall in New York.

"What's it meant for you to sing these songs this way now?"

"It's like being on the most wonderful velvet cushion," she said. "It's like having lived with Cole Porter and him writing songs for you from when I was 20 until his dying day.

To hear Jane Birkin perform "La Javanaise," from the album "Birkin/Gainsbourg: Le symphonique," click on the video player below: