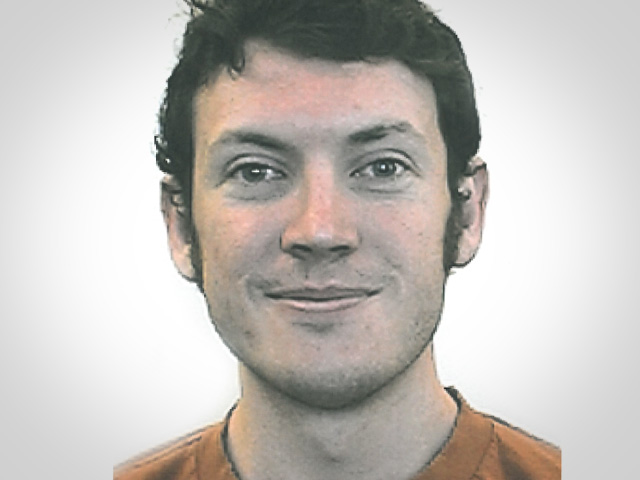 Twelve people died in the shooting at a showing of the new Batman film "The Dark Knight Rises" in Aurora, Colo., early Friday morning. A law enforcement source told Orr the shooting appears to have been carried out by a lone gunman.

One federal official told CBS News that at this time Holmes appears to have been "under the radar." CBS News reports Holmes doesn't appear to have a criminal record in Colorado or in San Diego, Calif., where he graduated from high school in 2006. Pentagon officials said there is no record of Holmes having served in any branch of the military.

San Diego police read a statement from Holmes' California family saying that their hearts go out to those involved. They say they're cooperating with authorities in San Diego and Aurora and are trying to process everything. San Diego police spokeswoman Andra Brown said there's nothing to suggest the family had any involvement.

Tom Mai, a retired electrical engineer who lives next door to Holmes' family, told The Associated Press that Holmes was a loner. Mai said he said hello to Holmes once in a while, but he seemed to be shy. The mother told Mai that Holmes couldn't find a job after graduating from a public university in California.

The University of California, Riverside, confirmed to CBS News that Holmes graduated in 2010 with a bachelor's degree in neuroscience.

The family lives on a quiet, well-to-do San Diego street of two-story homes with red tile roofs. Mai said the family lived there about 10 years. The mother is a nurse and the father is a manager at a software company. The suspect has a younger sister.

According to the University of Colorado, Denver, Holmes was in the process of dropping out of the school's graduate program in neurosciences. School spokeswoman Jacque Montgomery said in a statement that Holmes enrolled at the school in June 2011. She didn't say why he was withdrawing.

There was no immediate word of any motive for the attack. Federal law enforcement officials were briefed on the attack, but at this point there is no indication it is terrorism-related, CBS News senior correspondent John Miller reports.

Police evacuated the area surrounding Holmes' Denver-area apartment, saying the residence was apparently booby-trapped. A law enforcement source told Orr that police saw what looked like "buckets of extra ammunition" and some kind of chemical inside his home. (At left, watch CBS News senior correspondent John Miller break down the investigation)

CBS News has learned that some loud music blaring from Holmes' apartment around the time of the attack was designed to draw a noise complaint from a neighbor, thus luring police into his residence, sparking a firebomb and diverting resources from the movie theater.

Police recovered four guns at the theater, including two pistols, a shotgun and an assault rifle, Oates told reporters at a news conference. All four guns were purchased legally at three Colorado gun stores between May 22 and July 6, Orr reports. Authorities also recovered a ballistic helmet and a gas mask.

A law enforcement source told CBS News investigative producer Pat Milton that the attack appears to have been planned well in advance. Holmes parked his vehicle at the rear of the Century 16 theaters at the Aurora Mall and entered the theater through an emergency door in the back. He exited through the same door and was apprehended without incident.

The violent and chaotic scene erupted about 12:30 a.m. local time as the gunman stood at the front of the theater. Witnesses reported that the gunman threw a gas canister before opening fire.

"Witnesses tell us he released some sort of canister. They heard a hissing sound and some gas emerged and the gunman opened fire," Oates said.

Officers found Holmes near a car behind the theater.

It was the worst mass shooting in the United States since 32 people were killed on the Virginia Tech campus in 2007. It was the worst in Colorado since the Columbine High School massacre on April 20, 1999. Students Eric Harris, 18, and Dylan Klebold, 17, opened fire at the school in the Denver suburb of Littleton, about 15 miles west of Aurora, killing 12 classmates and a teacher and wounding 26 others before killing themselves in the school's library.

The shooting occurred in Theater 9, which has a capacity of around 300 people, according to CBS Denver station KCNC-TV.

Victims were rushed to six area hospitals. Sixteen of the wounded were listed in critical condition, CBS News correspondent Barry Petersen reports. The youngest reported victim is a 4-month-old, who was treated and released from University Hospital. Another victim is a 6-year-old being treated at Children's Hospital, where a total of six victims were taken. Their condition wasn't known.

Victims were being treated for chemical exposure apparently related to canisters thrown by the gunman.Corbin Dates told Petersen he saw a man take a phone call by the emergency exit and possibly try to signal or look for somebody during the movie's opening credits. After the movie started, the emergency exit door swung open.

"Somebody walks in dressed all in black, helmet, gas mask, black outfit, you cannot see anything but the person's eyes," said Dates, "and there was a gas can that was thrown into the audience behind me. It went off. I thought it was a stunt of the movie, so I didn't think anything serious of it once it went off."

When gunshots went off, Dates and his friend dropped to the floor and started to crawl through the theater, he said.

"I felt the caps from the bullets burn my leg," Dates said.

William Kent, who was in an adjacent theater, said bullets came through the wall but with the action on screen, people didn't realize what was happening.

"And they started the fire alarm or the emergency alarm, said that there had been something that happened in the building and evacuated everybody. There was a huge commotion to get out of the theater. When I exited, there were police officers with assault rifles running in," Kent told CBS News.

Benjamin Fernandez, who was also in an adjacent theater, said he saw a young girl, around 12 or 13 years old, lying on the concrete when he exited the building.

"From what I saw, she had two bullet wounds in her leg and just blood all over her stomach. Her friends were all just yelling, crying. ... We were just all pretty much in shock," he said on "CBS This Morning."

The police said 10 victims died at the theater and two at area hospitals.

Aurora is located on the southeast outskirts of Denver, about 10 miles from downtown.

President Obama addressed the shooting from Fort Myers, Fla., calling for a moment of silence.

"There are going to be other days for politics," Mr. Obama said. "This, I think, is a day for prayer and reflection."

The president thanked the gathered crowd and told them he was grateful for their support.

"I was looking forward to having a fun conversation with you about some really important matters we face as a country ... the differences between myself and my opponent in this election," he said. "But this morning we woke up to news of a tragedy that reminds us of all the ways we are united as one American family."

Republican challenger Mitt Romney embraced the same sentiment of unity in Bow, N.H., where he had been scheduled to campaign.

"We'll all spend a little less time thinking about the worries of our day and more time wondering about how to help those who are in need of compassion most," he said in brief remarks to a subdued audience. "The answer is that we can come together. We will show our fellow citizens the good heart of the America we know and love.

Mr. Obama canceled a second appearance scheduled near Orlando, Fla., and was returning to Washington. Romney, too, canceled some media interviews. And both candidates moved to pull ads against each other airing in Colorado.

Warner Bros., which produced "The Dark Knight Rises" said the company was "deeply saddened to learn about this shocking incident. We extend our sincere sympathies to the families and loved ones of the victims at this tragic time."