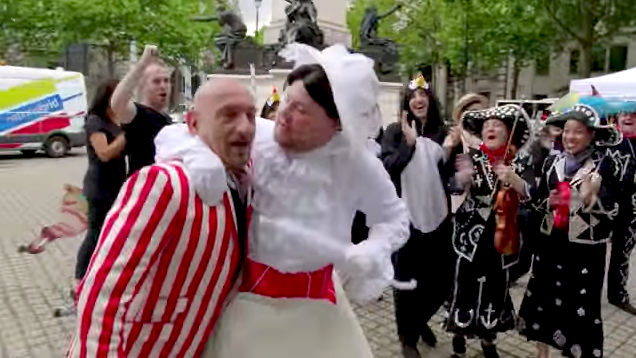 James Corden introduced the latest installment of "Crosswalk Theater" on the "Late Late Show," and this time, he pulled in some serious talent for his production of "Mary Poppins."

"It gives me great pride and honor to welcome a true heavyweight," said Corden. "Playing the role of Bert in this production: Sir Ben Kingsley, everybody." Corden cast himself as Mary Poppins.

Kingsley said, "I'm so excited to be here. I've always liked James, and when he told me about the idea of course I jumped at the chance. Theater should be for the people -- especially in this case for people in their cars driving home from work."

"From my years in the theater the best thing I can impart -- " Kinglsey said before Corden quickly cut him off, saying that he hoped their production with be "supercalifrag."

The "Late Late Show" host said people would come away from the number saying, "Wow, that was expialidosh."

Later, Corden, fully done up with rosy cheeks, and Kingsley, in Bert's signature red and white candy-striped suit, took their places in the crosswalk to perform "Supercalifragilisticexpialidocious."

Afterward, Corden said to Kingsley, "That is the performance of your life. That made 'Gandhi' look like amateur hour."