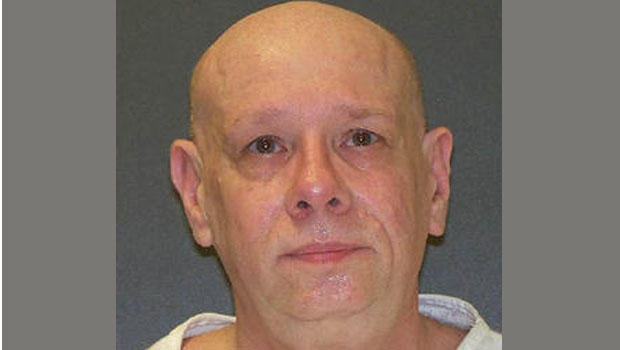 HUNTSVILLE, Texas -- Texas executed on Tuesday a man convicted of the 1987 killings of a father and his infant son and who three years later at his capital murder trial grabbed a loaded gun from a drawer in the courtroom and tried to attack the judge.

James Bigby, 61, became the fourth inmate in Texas and the sixth nationally to be executed by injection this year.

Strapped to the death chamber gurney, Bigby looked directly at six relatives of his victims watching through a window a few feet from him and repeatedly said he was sorry.

“I hope this will bring you peace and I’m sorry for all the pain and suffering,” he told them, his voice cracking at times. “I hope that you could forgive me, but if you don’t, I understand. I don’t think I could forgive anyone who would have killed my children.”

As the lethal dose of pentobarbital began, he prayed and said several times: “I promise, I’m sorry.” He was singing “Jesus Loves Me” as the drug took effect, took a few breaths, started snoring and then stopped all movement.

Fourteen minutes later, at 6:31 p.m., he was pronounced dead.

Bigby was condemned for the fatal shooting of Michael Trekell, 26, and suffocation of Trekell’s 4-month-old son, Jayson, at their home in Arlington on Christmas Eve 1987. Evidence showed Bigby also was accused but not tried for killing two other men, believing they along with Trekell were conspiring against him in a workers’ compensation case he filed against a former employer.

Trekell’s sister and the child’s aunt, Deborah Trekell-Jameson, released a statement following the execution saying she witnessed Bigby’s death not to judge him, but to “support the completion of what James Bigby began with my family almost 30 years ago ... when he committed such a heinous crime.

“This day will be yet another remembrance in the history that was forever changed by James Bigby for our families,” she said.

Bigby was arrested after a police standoff days after the killings, telling a SWAT officer in Fort Worth, “I know I am guilty, and so do you.”

The U.S. Supreme Court in 2015 refused to review Bigby’s case after a lower federal appeals court had rejected appeals. He asked that no last-day appeals be filed for him.

At his 1991 capital murder trial in Fort Worth, Bigby grabbed a loaded gun from behind District Judge Don Leonard’s bench during a court recess and barged into Leonard’s chambers. The judge and a prosecutor wrestled Bigby to the floor and pulled the gun away and the judge continued presiding over the case.

Jurors were told about the attack, rejected Bigby’s insanity defense and decided he should die. Then in 2005, a federal appeals court threw out his death sentence, saying the trial jury wasn’t properly instructed during punishment.

“I don’t think anyone in the courtroom claimed he wasn’t mentally ill, but there were too many dead people and a dead baby,” Wes Ball, one of Bigby’s defense lawyers at the new punishment trial, recalled Monday. “And going up and getting the judge’s gun out of his drawer in court and going at him ... is kind of the icing-on-the-cake moment.”

Bigby was never tried for the killings of Calvin Crane Jr., 38, in nearby Fort Worth, and Frank Johnson, 33, in Arlington. Both were shot at their homes.

Court documents show Bigby, who had worked as an auto mechanic and had two previous prison stints for burglary, believed they and Trekell were conspiring against him in his workers’ compensation lawsuit against a former employer, Frito Lay Inc., where he worked in a body shop.

In his statement to police he described how he shot Trekell with a shotgun while the man was at a kitchen table preparing steaks, then went to the infant’s room and wrapped the child’s head with cellophane he took from a refrigerator, suffocating him. Bigby then filled a bathroom sink with water and put the baby face-down into the water.

“I regret killing the baby but not the other,” Bigby told police.