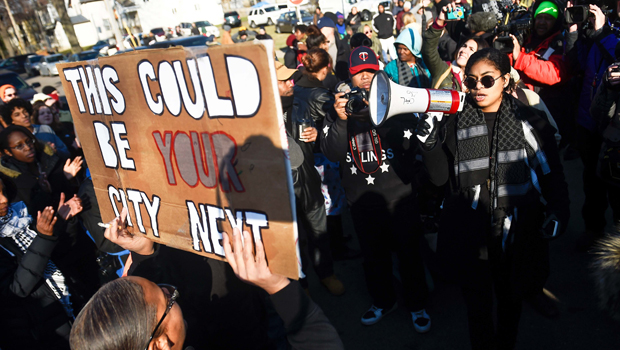 MINNEAPOLIS -- A steady stream of mourners entered a north Minneapolis church on Wednesday to pay their respects to a man whose death in a confrontation with police sparked more than a week of protests. Meanwhile, charges were pending against four men suspected in a melee that left five protesters with gunshot wounds.

A picture of a smiling Jamar Clark adorned the program for his funeral at Shiloh Temple International Ministries. Inside, his obituary said the 24-year-old man "liked to swim, fish, listen to music, play basketball, be with family and take trips to Charlotte, North Carolina."

Clark, who was black, died Nov. 15 in what police say was a scuffle with officers responding to an assault of a woman in which he was a suspect. Some community members who say they saw the incident allege Clark was handcuffed when he was shot, which police have disputed. A state criminal investigation and a federal civil rights probe are underway.

On Tuesday, Minnesota Gov. Mark Dayton said a video of the shooting does not appear to support one point of view or another, CBS Minneapolis station WCCO-TV reports.

Several hundred people filled the cavernous Shiloh Temple, with impassioned speeches from family members and pastors occasionally interrupted by shouts and applause, and a slideshow of pictures of Clark as he grew up. Several members of Clark's family wore white T-shirts that read, "I matter," on the front with Clark's picture on the back.

Bishop Richard Howell praised protesters for pressure that he said helped get a federal civil rights investigation and the names of the officers involved. Howell said what's needed now is a special state legislative session to address the needs of Minnesota's minority community.

"Jamar, your life did and does have purpose," he said to a standing ovation. "Your death is not in vain."

Protesters have rallied nightly outside the 4th Precinct police station near the scene of his death. On Tuesday, police arrested four men - Joseph Martin Backman, 27; Nathan Wayne Gustavsson, 21; Daniel Thomas Macey, 26; and Allen Lawrence Scarsella, 23 - on suspicion of shooting five Black Lives Matters protesters after some of them tried to get the men to leave the site late Monday night.

Late Wednesday, authorities announced the suspects would remain in jail awaiting charges over the Thanksgiving holiday weekend as the investigation continued.

The shootings spurred a massive march Tuesday evening, with a racially mixed crowd marching more than 2 miles to City Hall and back. Hundreds of demonstrators milled quietly around portable fire pits to share coffee, pizza and doughnuts as music played.

But the shootings have prompted safety concerns. Clark's family has asked for protesters to end the 4th Precinct encampment, out of concern for their safety, and U.S. Rep. Keith Ellison said it would be wise to "start thinking about an exit strategy" and what to do next.

Steven Belton, interim president of the Minneapolis Urban League, echoed those sentiments on Wednesday, saying protesters had achieved most of what they wanted, including the federal investigation and the names of the officers involved.

Belton said the vigil should end to "restore order" to the community, which he said has endured open gunfire, traffic and service interruptions, smoke from the protesters' fires and hours of helicopter noise.

That likely won't happen, said Jayme Ali, a pastor at God of All Truth Church.

In brief remarks outside the church where Clark's funeral was being held, as mourners streamed past, she said another rally was planned for Wednesday afternoon. Protesters have demanded investigators release video of the Clark shooting, and Ali noted it took more than a year before the city of Chicago on Tuesday released video of the fatal police shooting of a black teenager.

"We are not going nowhere. We are there until we get justice for Jamar Clark," she said. "Fourth Precinct, start taking donations for a new building, because we are not going anywhere."

Police haven't given a suspected motive for the shootings of the protesters. But they followed several racially disparaging comments about the protests that had been posted on social media in recent days. One video showed a white man brandishing a gun while claiming to be on his way to the protests. Police had issued a warning Friday night, asking demonstrators to be vigilant and report any suspicious behavior to authorities.