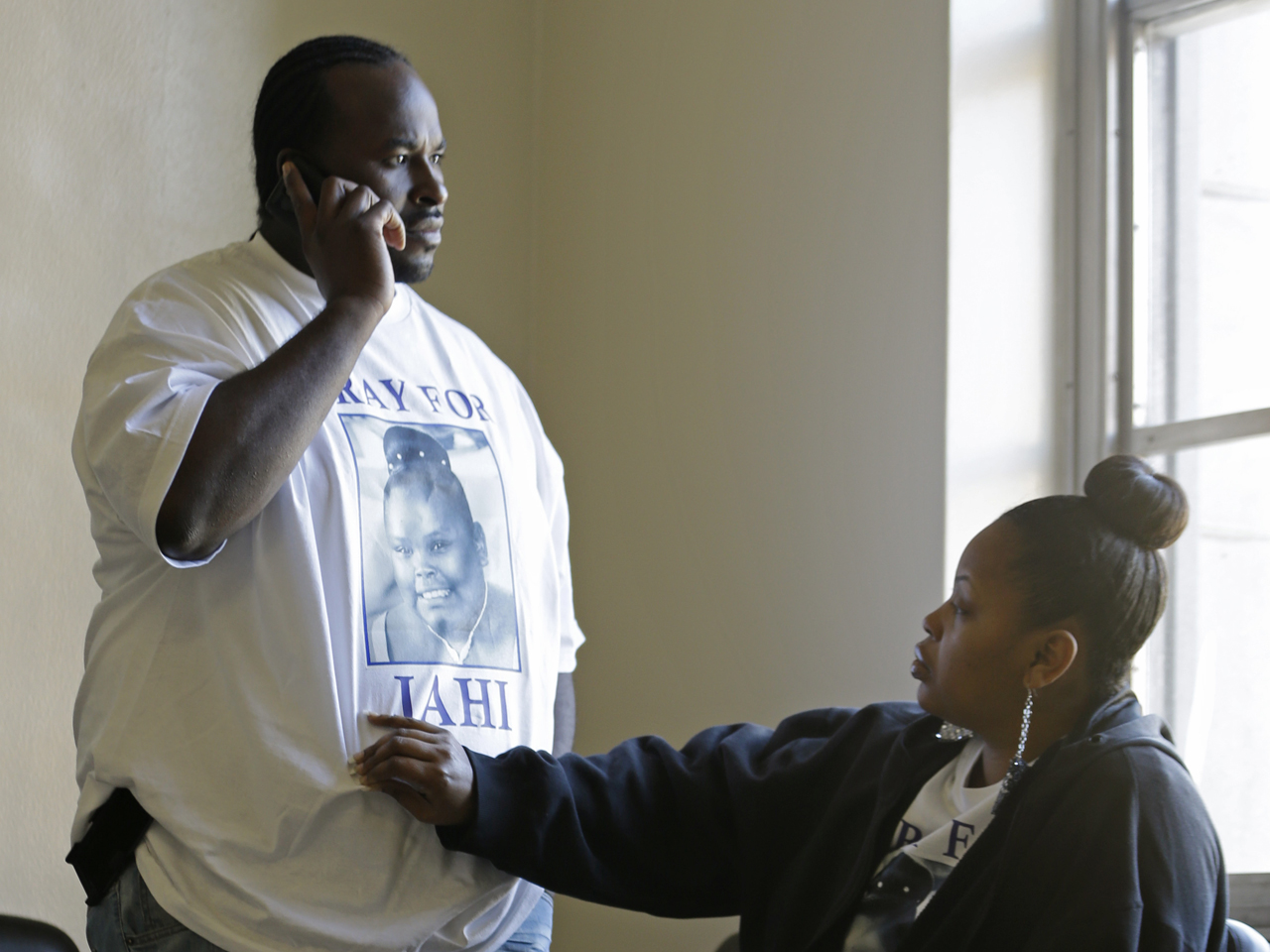 SAN FRANCISCO -- The 13-year-old California girl who was declared brain dead after tonsil surgery has been taken to a facility where her family says they can take care of her.

A critical care team took Jahi McMath while she was attached to a ventilator but without a feeding tube on Sunday night from Children's Hospital Oakland, after a weekslong battle with the hospital over her care.

Her family wouldn't disclose where she had been taken. Her uncle, Omari Seeley, said Monday that she traveled by ground and that there were no complications in the transfer, suggesting Jahi may be in California.

The new facility has "been very welcoming with open arms. They have beliefs just like ours," he said. "They believe as we do."

Her family said Jahi is receiving antibiotics and nutritional supplements at the new facility.

“She's going to be treated like the innocent little girl she is and not as a deceased body,” her uncle told CBS News Monday.

While the move ends what had been a very public and tense fight with the hospital, it also brings on new challenge: caring for her.

Jahi went into cardiac arrest while recovering from surgery to fix severe sleep apnea, a condition where the sufferer's breath stops or becomes labored while sleeping. To help her, surgeons removed her tonsils and other parts of her nose and throat.

Three doctors have declared Jahi brain dead based on exams and tests showing no blood flow or electrical activity in either her cerebrum or the brain stem that controls breathing.

"There is no evidence to anyone that suggests Jahi McMath has any chance of recovering any brain function,” Douglas Straus, an attorney for Children’s Hospital, told CBS News. “That is a sad, but undisputed fact."

This is different from being in a coma when there is brain activity, as was the case for Terri Schiavo, who was at the center of a right-to-die struggle more than a decade ago. Schiavo had a heart attack and suffered brain damage that left her in a persistent vegetative state, or coma, and her husband wanted to remove her feeding tube over the objections of her parents.

Multiple outside doctors and bioethicists observing the case have said a patient in that condition meets the legal criteria for death and has no chance of recovering.

The hospital had wanted to remove Jahi from the ventilator that is keeping her heart pumping, arguing in court that Jahi's brain death means she is legally dead.

Her mother, Nailah Winkfield, refusing to believe her daughter is dead as long as her heart is beating, had gone to court to stop the machine from being disconnected.

She has wanted to transfer Jahi to another facility and had hoped to force the hospital either to insert the tubes or to allow an outside doctor to do so.

The hospital refused to fit her with a feeding tube or a breathing tube that would help stabilize her during a move. Hospital officials say it was unethical to perform medical procedures on a dead person.

When the hospital refused to do the procedures and after weeks of court battles, the two sides reached an agreement, provided that Winkfield would be held responsible if her daughter went into cardiac arrest.

David Durand, the hospital's Chief of Pediatrics, said in an email Sunday that the girl was released to the coroner. The coroner then released her into the custody of Winkfield, as per the court order.

The family's lawyer, Christopher Dolan, said Jahi's condition suffered because of poor nutrition during her hospital stay. "We are very relieved she got safely to where she needed to be," he said.

"She's in very bad shape," he said. "You would be too, if you hadn't had nutrition in 26 days and were a sick little girl to begin with."