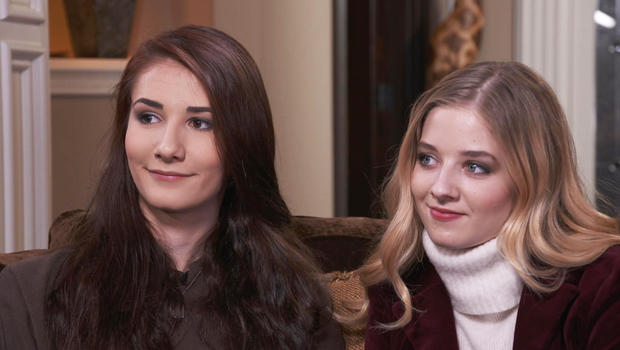 This Friday at noon, Jackie Evancho will be raising her voice -- and what a voice! -- to sing the National Anthem at the Inauguration. With Michelle Miller, we take note:

“It’s a normal sibling relationship,” said Juliet Evancho. “We have our good moments and we have our bad!”

Jackie and Juliet Evancho are typical sisters in many of the usual ways.

Miller asked, “Why do you have bad moments?”

“She always had to have the prettiest Barbie and the prettiest dress,” Jackie said. “And me being the amazing person I am, I gave it to her!”

“Yeah, but now look -- she wears the pretty dresses and performs for so many people!”

And that’s one of the few things that set them apart. At 16, Jackie Evancho in fast becoming an international star. With a voice like hers, you would think she was born singing, but that wasn’t really the case.

“I always sang a little bit, like, around the house, just like everybody else,” she said. “It was never good until I got my tonsils removed. And they were abnormally large. So my whole voice changed. My voice clicked and found its place. That was when I was eight. So, that’s when it happened!”

What happened was this:

Parents Mike and Lisa Evancho submitted a video of Jackie singing “Panis Angelicus” to the TV competition show, “America’s Got Talent” -- and Jackie got the call.

She was 10 years old, with a voice way beyond her years. She came in second, but either way, a star was born.

Since then, Evancho has sung duets with Tony Bennett and Andrea Boccelli … released seven albums … and performed for President Obama and adoring crowds around the world.

Back home near Pittsburgh, life is a lot more ordinary. Jackie drives her two sisters and brother to school each day, and attends a public high school where, she admits, stardom comes at a price.

“Yeah,” Jackie replied. “I mean, everyone has in their own way. People just say things.”

They make fun, because Juliet Evancho was born Jacob Evancho, and is transgender.

Miller asked, “How has this relationship changed? I mean, has it really changed between the two of you?”

“No. We were always really close with each other, even before I transitioned and everything. I was still always her sister, if that makes sense?” Juliet said.

She knew? “It’s kind of hard not to,” Jackie replied.

Both sisters support LGBTQ rights, and when Jackie agreed to perform at the Trump-Pence inauguration, critics accused her of giving tacit approval to an incoming administration they believe will be intolerant of people like her sister.

Juliet disagrees: “The way I look at it is, Jackie is singing for our country, and it’s an honor for her to be singing in front of so many people. So I feel like that’s really where I look at it. And that’s where I’m going to leave it right now.”

Juliet says, owing to prior engagements, she will not attend the Inauguration.

So this Friday, as America turns its eye toward the future, a little girl with a big voice will step up to the microphone and just sing her heart out.

Miller asked, “What do you hope to give the people in the audience?”

“I hope to just kind of make everyone forget about rivals and politics for a second, and just think about America and the pretty song that I’m singing,” Jackie laughed. “I’m hoping that I can bring people together.”