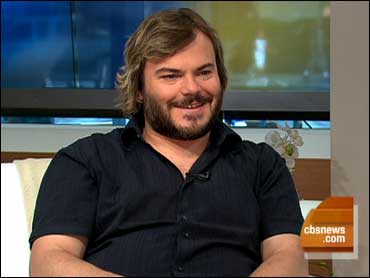 Comedic actor Jack Black, fresh off the box office smash "Kung Fu Panda," has found himself in the jungle yet again.

In the film, he stars as Jeff Portnoy, a highly successful comedian looking to be taken seriously as an actor.

In a twist of events, the Hollywood satire forces the actors who are filming the big-budget war movie to become the soldiers they are portraying.

Black sat down with Early Show co-anchor Harry Smith to discuss what it was like on the set of "Tropic Thunder."

Black fit right in alongside funnyman Ben Stiller, who produces and directs the film, Robert Downey Jr., who plays Kirk Lazarus, an Academy Award-winning Australian actor who undergoes skin-pigmentation surgery to play a black soldier and Nick Nolte, a vet whose rescue memoir is the basis for "Tropic Thunder."

However, he wasn't accustomed to working alongside a water buffalo.

Black, whose character is going through drug withdrawal, improvised by chasing after a water buffalo saying, "I need to wear his stomach skin like a unitard." Although the scene stirs up laughter, Black found it a bit challenging playing with a bovine on the big screen.

"When I read the script I was blown away," he said. "It's one of the funniest scripts I've ever read. But I was filled with dread about the water buffalo scenes. I have a lot of scenes with this water buffalo. I have to be strapped to the back of it in my underpants for a few scenes.

"I'm fine with being embarrassed. It's just being in actual physical peril. I will do almost anything for a laugh, but I don't want to die," Black said sarcastically.

Black, perhaps only half-kidding, said that he felt that his life was in danger.

"At one point I did get flipped off the back of the buffalo. It didn't want me up there," he admitted. "It was a showbiz buffalo. You can say that about a showbiz great white shark. You can say, don't worry about it, it's showbiz. You can't take its natural inclination, that is to be a thousand pounds of muscle, and do bad stuff."

The film has generated some controversy over its repeated use of the word "retard" and Robert Downey Jr. portraying a white actor playing a black man, but that didn't stop Black from going full speed ahead with his character portrayal.

Smith suggested that Black's portrayal of his character was a lot like actor Brian Dennehy's in "First Blood" (1982) with Sylvester Stallone. Dennehy played a bigoted sheriff opposite Stallone's Vietnam War vet John Rambo.

"I can't get into specifics of who I was channeling because they might come after me later," Black said. "There's never been a movie that's put the hot focus, attention on the movie industry like this one. I'm kind of proud and also embarrassed and ashamed."

"Tropic Thunder" was shot on the beautiful, jungle-like Hawaiian island of Kaui.

"There's a lot of areas out there that look like southeast Asia, which is what we were looking for," Black said.

Black, a member of the band Tenacious D, and known for belting out songs in his movie "School Of Rock," doesn't sing in "Tropic Thunder," but he sang a couple of high notes for Smith.

"I'm a multi-faceted man," Black said while making a face.