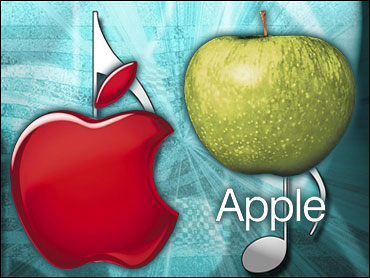 Apple Computer Inc. is entitled to use the apple logo on its iTunes Music Store, a judge ruled Monday, rejecting a suit filed by Apple Corps Ltd., the guardian of The Beatles' commercial interests.

Apple Corps, which claimed that the computer company had broken a 1991 agreement in which each side agreed not to enter into the other's field of business, said it would appeal.

Judge Edward Mann of Britain's High Court ruled that Apple Computer used the fruit logo in association with the store, not the music, and thus did not breach the agreement.

Though Apple Computer CEO Steve Jobs said he was "glad to put this disagreement behind us," the case appears far from over. Neil Aspinall, the manager of Apple Corps, said his company would immediately appeal.

"We felt that during the course of the trial we clearly demonstrated just how extensively Apple Computer has broken the agreement," Aspinall said in a statement.

The Beatles established their Apple label in 1968 at the height of Beatlemania, reports CBS News correspondent Mark Phillips. It was part of a process, one of their biographers says, of remaking the pop music world in their own image.

"Paul McCartney called it 'a nice kind of Western Communism'," says Peter Doggett, author of The Beatles: The Summer Of 1968. "It was going to be a big organization where anybody who wanted to be successful like the Beatles could come in and they wouldn't have to deal with all the rubbish and this sort of bureaucracy that all the other record labels put them through.

Apple Corps is still owned by Paul McCartney, Ringo Starr, the widow of John Lennon and the estate of George Harrison. Doggett thinks, "The only thing that Apple records seems to stand for these days are: No. 1, collecting the Beatles' royalties, and No. 2, suing people."

Under the terms of the 1991 agreement, Apple Computer agreed that it may be involved in digital music, but would not package or distribute music materials, such as CDs, the Financial Times reports.

Apple Computer has sold more than 1 billion songs through the iTunes Music Store, which is available throughout Europe as well as in the United States, Canada, Australia and Japan. Though there are more than 3 million tracks available for purchase in the U.S. — and 2 million in Britain — there are no Beatles' songs listed. The band's catalog is not available on iTunes.

In his brief statement, Jobs said he hoped the ruling would help rectify that situation: "We have always loved the Beatles, and hopefully we can now work together to get them on the iTunes Music Store."

Lawyers for Cupertino, Calif.-based Apple Computer had argued that the company was conducting its business legally and consumers are smart enough to tell the difference between the logos. Apple Corps uses a shiny green apple as its logo, while Apple Computer has a cartoon-like apple with a neat bite taken out.

Lawyers for each side tussled during the hearing over advertisements for iTunes featuring musical acts U2, Eminem and Coldplay, using the logo.

The 1991 agreement ended previous lengthy litigation over the logo. Apple Computer told the court that it paid the Fab Four's company $26.5 million as part of the 1991 out-of-court settlement, and in return had received "a considerably expanded field of use." The terms of the deal were kept confidential at the time.

Mann refused Apple Computer's application for an immediate interim payment of $2.8 million from Apple Corps toward its legal costs, pending further hearings. Apple Corps faces a similar bill for its own legal expenses.

Mann — who admitted he had an iPod himself early on in the case — ruled that Apple Computer only used the apple logo in association with the online store and not music, the Financial Times reports.

While the case may have seemed glamorous because of the litigants, it really came down to the interpretation of a contract — the 1991 agreement — said Jonathan Riley, an intellectual property lawyer with London firm Lawrence Graham.

"It was watched with interest, but also some distance, because I don't think it's hugely significant for either the computer industry or the music industry," he said.