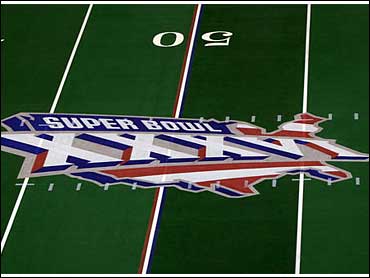 The Super Bowl pre-game, halftime, game and post-game will dominate the airwaves not just in the United States, but around the world.

The NFL says Sunday's broadcast will go to 166 countries, from Australia to Yemen, and reach an estimated audience of 800 million.

The broadcast will be seen in spots as diverse as Vatican City and Vietnam, Brunei and Bulgaria, Cambodia and Canada, Iceland and India.

In addition, the activities will be broadcast in 26 languages. Two Japanese stations will have 59 people at the game. And broadcasts will originate from the Louisiana Superdome in Danish, Dutch, English, French, German, Italian, Japanese, Spanish and Russian.

In the U. S., the Fox network is broadcasting this year’s game.

Nielsen Media Research estimated the Super Bowl's average audience was 84.3 million, versus 24.3 million for “Friends,” which Nielson says is the highest rated prime-time series so far this season. “Friends” has a 15 rating; last year's Super Bowl, broadcast on CBS, had a 40.4 rating. Each rating point represents about 1.06 million homes