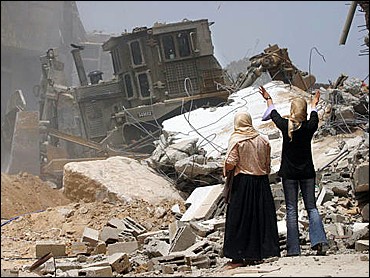 Israeli bulldozers Friday tore down houses on the edge of a Palestinian refugee camp, close to a military patrol road where five soldiers were killed in a Palestinian attack two days earlier.

The destruction was part of plans to widen a flashpoint corridor between Gaza and Egypt, reports CBS News Correspondent Robert Berger. The area is a haven for tunnels used to smuggle weapons from Egypt to the Palestinians.

Witnesses said more than 20 houses were demolished by Friday afternoon, and Israel's army chief said the destruction would continue. Sporadic fire from tanks and helicopters provided cover for the bulldozers.

Meanwhile, the latest violence — a total of 11 soldiers have died in Gaza this week — has triggered hot debate over Israel's presence in the area, which is home to 7,500 Jewish settlers and 1.3 million Palestinians. While some called for a pullout, others recommended tougher military measures.

A poll published Friday in the Yediot Ahronot daily showed a sharp rise in support for Prime Minister Ariel Sharon's plan for a unilateral withdrawal from Gaza. Voters in Sharon's Likud Party vetoed the proposal earlier this month, despite wide public backing for the plan.

The Yediot survey of 503 people conducted after the latest violence showed 71 percent of respondents in favor of a pullout, up from 62 percent on May 4. Opposition slipped to 24 percent from 32 percent. The margin of error was 4.4 percentage points.

"I believe that disengagement is inevitable, and yet at the same time I believe that we have to fight terror," countered Deputy Prime Minister Ehud Olmert.

Israel Radio said the military planned to demolish hundreds of buildings in the camp, adjacent to the road where Wednesday's attack on an Israeli armored vehicle took place, to remove possible Palestinian vantage points or cover for potential attackers.

"We will do, like we did in the past, the best effort we can in order to contain terrorism," said government spokesman Avi Pazner.

Lt. Gen. Moshe Yaalon, the army chief, told Israel Radio the second armored personnel carrier was hit by a projectile fired from one of the camp's houses.

"There's a process whereby the first row of houses is abandoned and used for digging tunnels for smuggling weapons and cover for shooting," he said. "We've been forced to destroy houses here in the past and apparently we'll have to destroy more houses in the future."

The Israeli military said that so far, it demolished only one house used as cover by gunmen, and several other buildings were damaged unintentionally by wide armored vehicles moving through narrow alleys.

Since the outbreak of fighting in September 2000, the Israeli military has razed hundreds of homes in the refugee camp, largely along the patrol road that runs between the edge of Rafah and the Egyptian border.

During the same period, Israeli troops have uncovered 80 weapons smuggling tunnels, running between Egypt and Rafah, the army said.

"This is a catastrophe. At a time when the Israelis are speaking of disengaging from Gaza this is really re-engaging," he told The Associated Press. "I hope that President Bush, who says he is encouraged by disengagement, will interfere to stop the demolitions."

The Gaza fighting has claimed the lives of 28 Palestinians since Tuesday and at least 235 have been wounded.

The military operation in Rafah started Wednesday, after Palestinian militants fired a homemade rocket from the camp at an armored personnel carrier transporting a ton of explosives. The blast killed five soldiers inside the vehicle, scattering their remains over a wide area. Troops were still searching for their comrades' body parts on Friday.

The Jerusalem Post reported Friday that APCs will no longer carry explosives. Sources said the decision had been made some time ago but has not yet been implemented.

Defense minister Shaul Mofaz told reporters that Palestinians had used United Nations and Red Cross ambulances to transport body remains to areas under their control. United Nations Relief and Works Agency spokesman Paul McCann replied that his organization has no information on the use of its ambulances to transport body remains. "We will be pleased to receive more concrete information and proof," he told the Post.