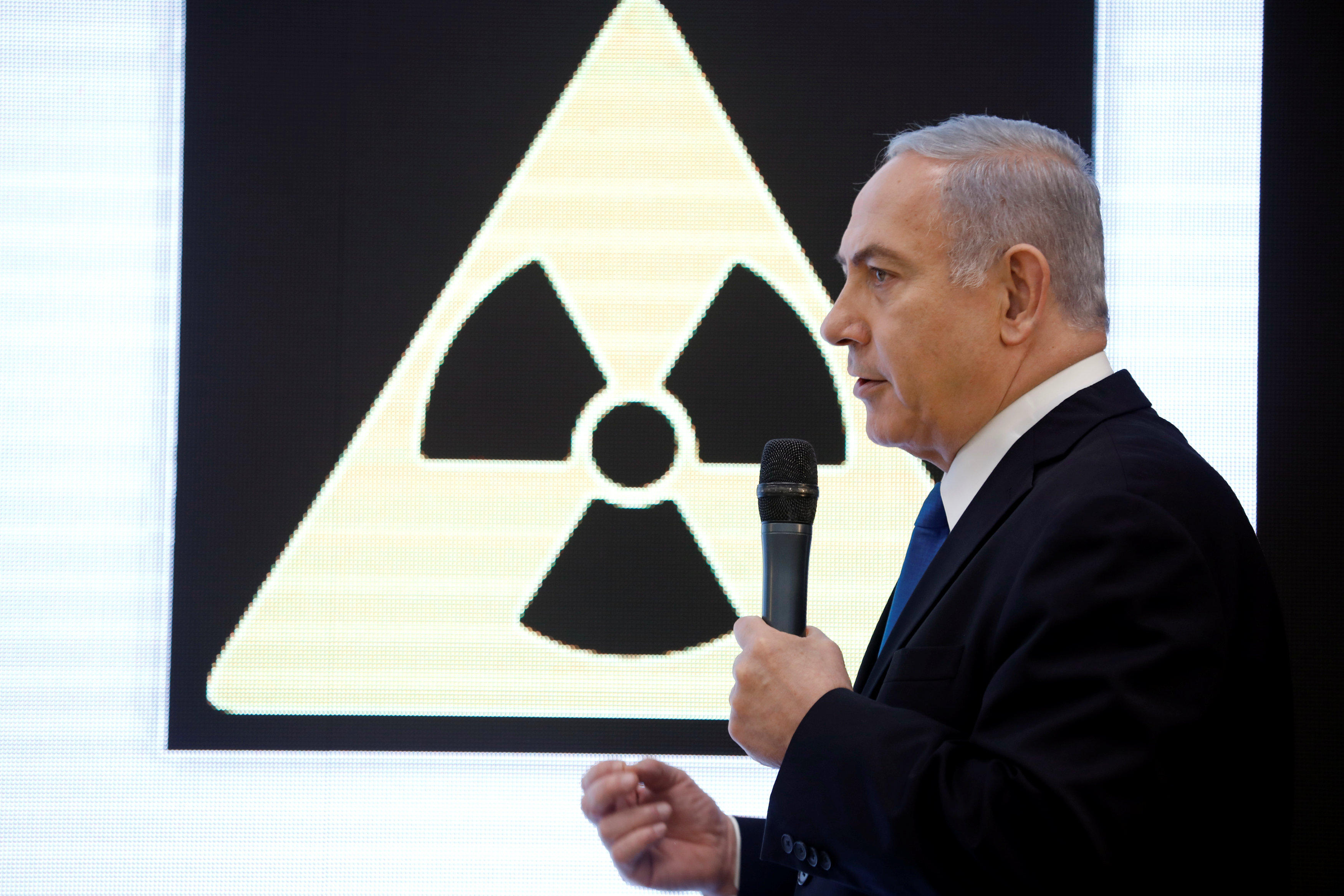 JERUSALEM -- Israel's prime minister on Monday unveiled what he said was a "half ton" of Iranian nuclear documents collected by Israeli intelligence, claiming the trove of information proved that Iranian leaders covered up a nuclear weapons program before signing a deal with the international community in 2015.

In a speech delivered in English and relying on his trademark use of visual aids, Prime Minister Benjamin Netanyahu claimed that the material showed that Iran cannot be trusted, and encouraged President Trump to withdraw from the deal next month.

"Iran lied big time," Netanyahu declared. In Washington, the president said it vindicated his past criticism of the nuclear deal.

But Netanyahu's presentation, delivered on live TV from Israeli military headquarters in Tel Aviv, did not appear to provide evidence that Iran has violated the 2015 deal, raising questions about whether it would sway international opinion ahead of Trump's fateful decision.

The U.S.-led agreement offered Iran relief from crippling sanctions in exchange for curbs on its nuclear program.

Netanyahu furiously fought the deal while President Obama was negotiating it, and he has been a leading critic since it was signed. He says it does not provide sufficient safeguards to prevent Iran from reaching a nuclear weapons capability.

Netanyahu has found a welcome partner in Mr. Trump, who has called the agreement "the worst deal ever."

Mr. Trump has signaled he will pull out of the agreement by May 12 unless it is revised, but he faces intense pressure from European allies not to do so. Netanyahu said he would share the newly uncovered information with Western allies and the international nuclear agency.

Ahead of the announcement, Iran's foreign minister, Mohammad Javad Zarif, belittled Netanyahu in a tweet, saying, "the boy who can't stop crying wolf is at it again."

The exchange ratcheted up already heightened tensions between Israel and Iran. Israel considers Iran to be its biggest threat, citing Tehran's hostile rhetoric, support for militants and growing influence in the region.

Israel has said it will not allow Iran to establish a permanent military presence in neighboring Syria, where Iran supports President Bashar Assad. Overnight Monday, a missile attack in northern Syria killed more than a dozen pro-government fighters, many of them Iranians, a war monitoring group and an Iranian news agency said.

There was no official confirmation of the death toll or the target. But Israel was widely suspected of being behind it.

In his presentation, Netanyahu said Israel had obtained some 55,000 pages of documents and 183 CDs of secret information from an Iranian nuclear weapons program called "Project Amad." He said the material was gathered from an Iranian facility in the Tehran neighborhood of Shourabad a few weeks ago "in a great intelligence achievement."

He said the uncovered filed included "incriminating" documents, charts, blueprints, photos and videos. He pointed to one presentation that allegedly called for producing and testing five warheads. He compared it to "five Hiroshima bombs to be put on ballistic missiles."

A 2015 report by the International Atomic Energy Agency, for example, concluded that Iran "conducted computer modeling of a nuclear explosive device" before 2005 and between 2005 and 2009. It said, however, that those calculations were "incomplete and fragmented."

Netanyahu provided no direct evidence that Iran has violated the 2015 deal. But he said the existence of the documents proves Iran is waiting to resume its race to build a bomb.

He said that after the project was disbanded in 2003, its director, Mohsen Fakhrizadeh, continued his work under another agency called Sapan.

Netanyahu said the material proves the international nuclear deal is a failure. He said it allows Iran to continue enriching some uranium, and does not address its research efforts or development of long-range ballistic missiles.

He noted that Mr. Trump was weighing whether to pull the U.S. out of the nuclear deal, saying "I am sure he will do the right thing."

At the White House, Mr. Trump praised Netanyahu's presentation and said it vindicated the president's past statements about Iran and the shortcomings of the nuclear deal, adding that recent events have "really shown that I've been 100 percent right." Although Mr.  Trump was hosting Nigeria's president for a visit during Netanyahu's speech Monday, he said he watched part of it on television.

"That is just not an acceptable situation," Mr. Trump said. He declined to say whether he'll pull out of the deal on May 12 but said that even if he does, "that doesn't mean I wouldn't then negotiate a real agreement."

Mr. Trump has set a May 12 deadline to decide whether to pull out of the Iran deal -- something he appears likely to do despite heavy pressure to stay in from European allies and other parties.

Both Mr. Trump and Netanyahu say the deal should address Iranian support for militants across the region and Iran's development of long-range ballistic missiles, as well as eliminate provisions that expire over the next decade.