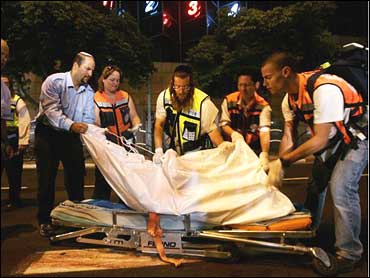 The Israeli military early Wednesday closed off the West Bank and Gaza Strip, banning Palestinians from entering the country, in Israel's first response to a suicide bombing that killed three Israeli women in the seaside city of Netanya.

The closure means that thousands of Palestinians who have work permits will not be allowed to enter Israel. The military said the ban, a routine security measure after such an attack, would be in effect "until further notice." The ban was approved by the government, the military said.

The suicide bomber blew himself up among a group of teens near a crowded shopping mall in the seaside city of Netanya on Tuesday, killing himself and three women. Police said about 30 people were injured, two seriously.

Among the more than 30 wounded was a 6-year-old girl who was badly burned, Israel TV reported.

Israeli police and Palestinian security identified the bomber as Ahmed Abu Khalil, an 18-year-old member of Islamic Jihad from the West Bank village of Atil, about eight miles east of Netanya.

Police said the two dead Israelis were women. Doron Shafir, one of the first paramedics at the scene, said he saw a woman whose clothes were on fire. "Another, her handbag was burning. We stepped on it to put it out. She was just sitting there. She did not know what was happening to her," he said.

Prime Minister Ariel Sharon did not comment after the bombing. David Baker, an official in Sharon's office, charged that the Palestinian Authority was not doing enough to rein in militants.

It was unlikely that the truce would collapse, however. Both sides have an interest in not walking away from their agreement. Prime Minister Ariel Sharon needs to maintain calm to carry out his Gaza withdrawal this summer, and Palestinian leader Mahmoud Abbas' political survival depends on maintaining the cease-fire, seen as key to easing harsh Israeli restrictions in the Palestinian areas.

Abbas used unusually strong language in denouncing the bombing. "We condemn this terrorist attack. It's a crime against the Palestinian people," he said. "Those traitors are working against the Palestinian interest. There is no rational man who can do those things on the eve of the Israeli withdrawal from 22 settlements," referring to Israel's planned pullout from Gaza and part of the West Bank.

Palestinian security officials said the bomber came from the same local Islamic Jihad cell that was responsible for the Feb. 25 bombing, but that the Islamic Jihad leadership was not involved.

Minutes before the Netanya blast, an Islamic Jihad militant attempted to drive a car bomb into a Jewish settlement in the West Bank, police said. The bomber was captured after the explosives detonated prematurely, police said, adding that the two attacks were linked.