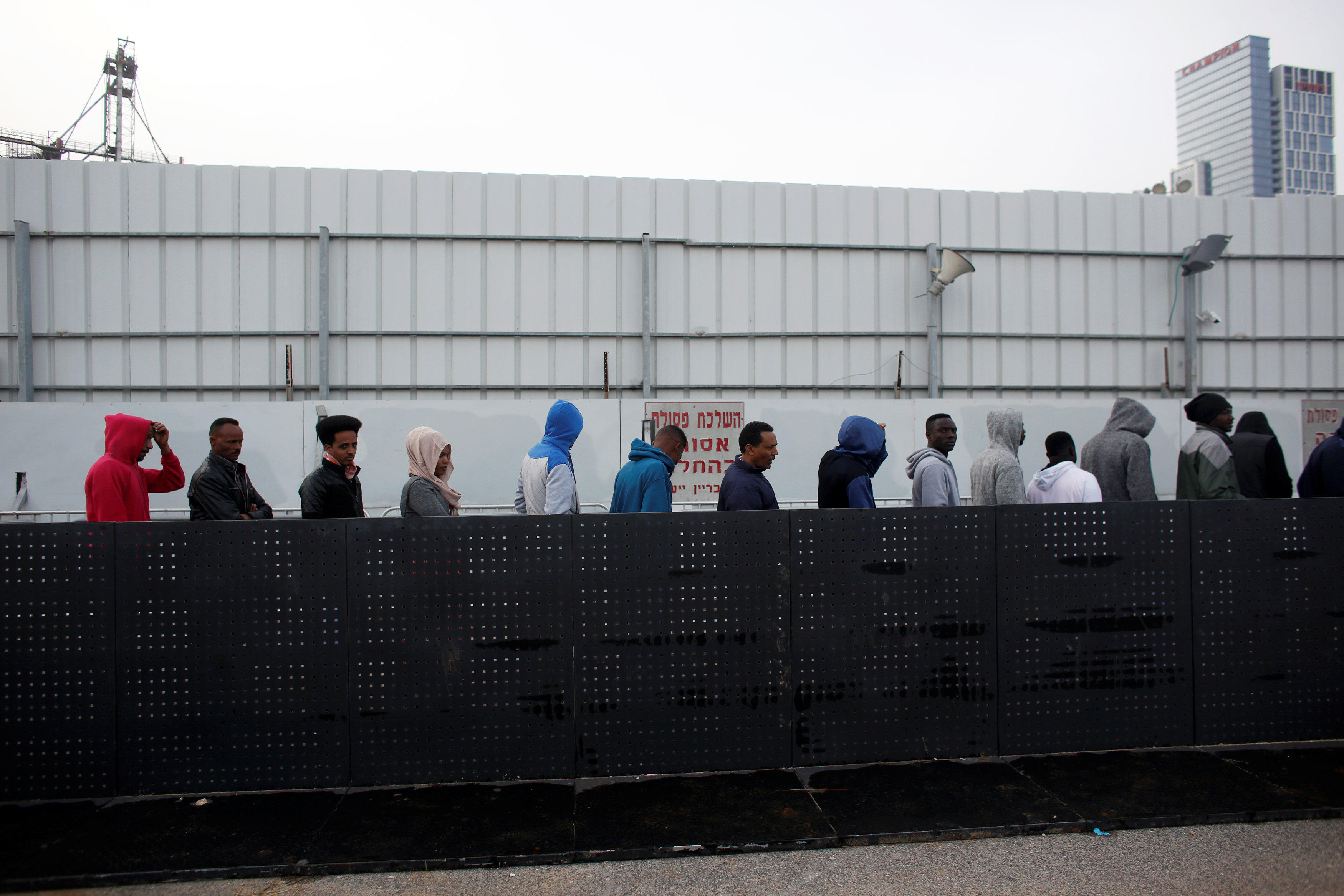 KAMPALA, Uganda -- Inside the immigration office in Tel Aviv, Yohannes Tesfagabr considered his options. He could not return to Eritrea, a country he risked his life to flee in 2010. He hoped to avoid the fate of compatriots who languished in a desert jail for illegally staying in Israel.

So in an emotional decision last November, the 29-year-old accepted what Israeli authorities were offering: $3,500 and a one-way ticket to Uganda or Rwanda.

Two weeks later he was on a flight to Uganda.

"They told me, 'If you don't leave you are going to jail,'" Tesfagabr recalled. "It's forced. They tell you to say you are going voluntarily, but it is not voluntary. They force you to deport yourself."

Tens of thousands of Africans in Israel face jail if they do not accept an offer, allegedly without further assurances of safety, to leave for an unnamed African country. Both Uganda and Rwanda, widely presumed to be the destinations, have denied any agreement with Israel's government even though scores of migrants are believed to have already settled in the East African countries.

Tesfagabr said his group of Eritreans was not taken through the official immigration desk upon arrival in Uganda. They were ushered through the cargo area by a Ugandan official and driven to a hotel in the capital, Kampala. Their passports were confiscated. Hours later, the undocumented Eritreans were dismissed.

The five other Eritreans declined to talk to The Associated Press because of safety concerns. But Tesfagabr said he wanted to speak out because he felt he had been harshly treated by Israel, a country he had grown to love.

"My Hebrew is four times better than my English," he said one recent evening.

Tesfagabr, a village boy who felt hopeless after being forcefully conscripted into Eritrea's army, arrived in Israel in 2012, the victim of alleged traffickers in Sudan who helped him cross a border point in the Sinai after his family was made to pay a $3,900 ransom. To force his parents to pay, his captors beat him and staged mock executions.

But after crossing into Israel, Tesfagabr benefited from random acts of kindness. In Rehovot, a city south of Tel Aviv, he found a satisfying job as a sous chef. He had an apartment and a bank account, but he had to get his visa renewed every two months.

When two compatriots were jailed for overstaying their visas, Tesfagabr knew his days were numbered.

"They take you like a dog, like a donkey," he said of the migrants taken to the Holot detention center in the Negev desert. "They do what they want."

This month Israeli authorities began distributing deportation notices to some 40,000 African migrants, who have until April 1 to comply. Nearly all are from Eritrea and Sudan, countries with questionable human rights records.

The deportation plan has sparked outrage in Israel, where many say it is unethical and damages Israel's image as a refuge. Israel cites complaints that the migrants have transformed working-class neighborhoods of southern Tel Aviv into unrecognizable slums. Israeli authorities say women, children and families are exempt from the deportation order.

This month thousands of African asylum seekers protested outside the Rwandan Embassy in Israel, calling the deportations racist and urging Rwanda not to cooperate. They claim they have no rights in Uganda and Rwanda and are forced to flee toward Europe through war-torn countries like Libya.

Okello Oryem, Uganda's deputy minister of international affairs, described reports of a deal to take in migrants from Israel as "fake news." Rwanda's government has insisted it "has never signed any secret deal with Israel regarding the relocation of African migrants."

Mossi Raz, an Israeli lawmaker who recently traveled to Rwanda and Uganda to investigate, said his group concluded that the arrangement "does not ensure the safety and well-being of the refugees."

Raz said the delegation met with two migrants believed to be among the few remaining in Rwanda. He said others, in the hundreds or thousands, were transferred to Uganda within days, forced to pay for their travel.

"The refugees will arrive in these countries and will not receive refugee status, their documents will be taken from them and they will be left with nothing," Raz said. "Rwanda is only participating in this agreement because of the money it will receive from Israel."

Tesfagabr, the Eritrean migrant, is now jobless, without a passport and dependent on his savings to pay the rent. The soft-spoken man said he feels like a prisoner and dreams of relocating to Europe.