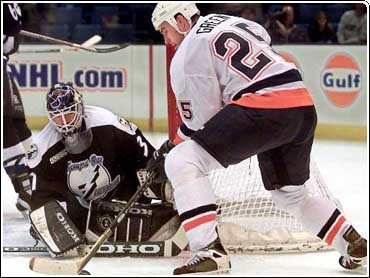 New York Islanders forward Mariusz Czerkawski is nicknamed "Chow," not only as a play on his last name, but for his hunger for scoring and winning.

On Thursday night, Czerkawski did both.

He had two goals and two assists as the Islanders blew a 3-1 lead, but rallied for a 5-4 overtime victory over the Tampa Bay Lightning.

Rookie Tim Connolly won the game with 1:11 left when his wrist shot from the left circle sailed over Rich Parent's glove.

"We played a good game," Czerkawski said. "It's frustrating when you play well and it's not enough."

New York entered with four straight losses, and though there was no score after 20 minutes, they lost defenseman Ray Giroux in the period with a broken right index finger. Giroux will miss four weeks.

The second period featured five goals and 98 penalty minutes. Czerkawski opened the scoring 51 seconds into the period when his wrist shot from the left circle beat Parent to the far corner.

The teams exchanged goals on a Lightning penalty. Stan Drulia tied the game at 2:38 when he finished off a 2-on-1 break by taking Steve Martins' pass in his skates as it deflected past Islanders goalie Roberto Luongo.

Ted Drury put New York back ahead at 3:52 when his innocent-looking back-hand shot from the right crease somehow squirted between Parent and the right post.

Just 30 seconds later, a brawl broke out resulting in 56 penalty minutes and the ejections of Drury and Tampa Bay's Jassen Cullimore.

"I honestly don't know what it is between us," Islanders defenseman Jamie Heward> said of the bad blood between the two teams this season. "It gets lively out there, that's for sure."

Tampa Bay then lost defenseman Petr Svoboda for the game when he received a penalty and wouldn't stop arguing. He totaled 24 minutes with a pair of minors, a misconduct and a game-misconduct.

On the first of those two minors, Czerkawski made it 3-1 at 9:23 with a one-timer from the right circle.

Paul Mara narrowed the deficit at 14:43 on a power play with a one-timer from the slot.

"We played well for the two periods, and then we had a couple of miscues near the end there," Heward said.

Those miscues allowed Tampa Bay to tie it and then take the lead 37 seconds later.

Vincent Lecavalier tied it 3-3 at 10:21 when his wrister from 30 feet hit Luongo, rolled up and over his arm and dropped into the net.

The Lightning took the lead at 10:58 when Fredrik Modin stuffed in a rebound.

New York had lost to Carolina on Tuesday night on a late goal, but Heward said the feeling on the bench was that they could come back.

"Against Carolina, they were dictating play and taking it to us," Heward said. "Tonight, we were pretty much taking the game to them."

Mike Watt tied it with 2:51 left when he converted Josh Green's pass out from behind the net.

"I think the shot hit one of their defensemen in the pants," Connolly said. "It was kind of a fluky goal, but I'll take it."

Parent said he let the team down.

"It's a tough loss even though we battled back and pulled ahead," Parent said. "I think the puck deflected a couple of times, but unfortunately, it beat me. I have to do a better job of keeping the guys even in the game."

"We just have to play better," he said.