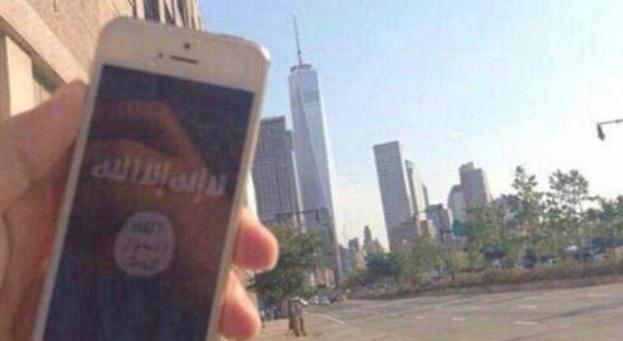 NEW YORK -- The NYPD says it is aware of and investigating what are being described as "ISIS selfies" posted on social media, CBS New York reports. One photo shows a man standing at the snowy corner of 79th Street and Fifth Avenue with the Metropolitan Museum of Art behind him.

He's wearing a scarf featuring the logo of the Islamic State of Iraq and Syria (ISIS) terror group. The caption says, "We are in your backyard," according to Eric Feinberg, the co-founder of cyber-intelligence firm GIPEC, who spoke to the New York Daily News.

Another photo, taken during warmer weather, shows a man holding a smartphone displaying the ISIS logo with One World Trade Center in the background.

The images were being distributed by pro-ISIS users online, according to SITE Intelligence Group.

CBS News' Khaled Wassef reports that this is not the first time pictures are circulating on ISIS social media. ISIS fans have previously posted similar ones announcing their presence in cities such as Berlin, Paris and Istanbul.

Apparently these images are posted online by so-called ISIS fanboys, and not by the terror group itself. Wassef points out that the social media activity is purely designed to make a splash at a time when the ISIS media machine has gone into sharp decline.

The NYPD says it's investigating, but there are no credible threats related to New York City.