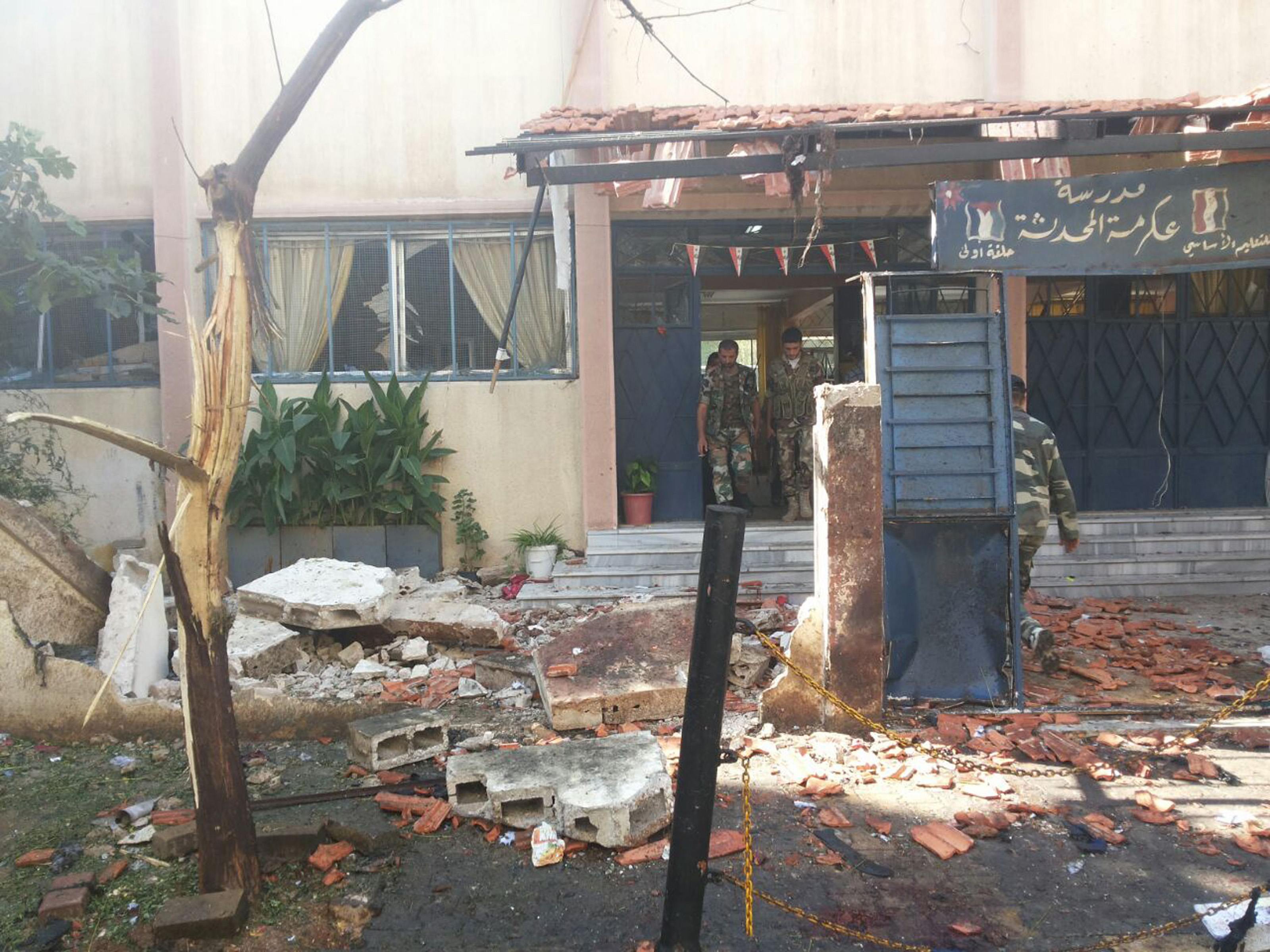 DAMASCUS, Syria -- Twin bombings near a school in central Syria killed at least 31 people on Wednesday, including at least 10 children, as gruesome images appeared on social media networks purported to show Kurdish fighters slain at the hands of Islamic State of Iraq and Syria (ISIS) militants during battles near Syria's border with Turkey.

The bombs went off in the city of Homs, in a neighborhood dominated by minority Alawities, a Shiite offshoot sect that President Bashar Assad also belongs to. It was one of the deadliest strikes to hit the government-controlled area in months.

The blasts occurred just as the children were leaving at the end of class at the Ekremah al-Makhzoumi elementary school, according to an official with the Homs governorate.

A Syrian pro-government channel aired a brief footage of the aftermath, showing distraught parents rushing about frantically looking for their children, amid strewn schoolbags and blood stains on the ground. Flames rose from a car nearby.

A Syrian official told CBS News' George Baghdadi that 31 were killed and another 74 injured in the attack.

The first explosion was from a car bomb parked and detonated in front of the school, followed minutes later by a suicide bomber who drive by and detonated his explosives-laden car, said the official.

Homs Governor Talal Barazzi described the blasts as a "terrorist act and a desperate attempt that targeted school children."

There was no immediate claim of responsibility for Wednesday's attack but Syrian rebels fighting to oust Assad have carried out such bombings during the country's civil war.

There have been horrific attacks against civilians by all sides throughout the brutal conflict, now in its fourth year, but rarely have children appeared to be the direct target. In May, Syrian government forces dropped a bomb in the northern city of Aleppo, hitting a complex that held a school alongside a rebel compound. At least 19 people, including 10 children were killed in that incident.

As CBS News' Holly Williams reported on Monday, female fighters are playing a key role in some of the most intense fighting against ISIS in Kurdish areas.

The Kurds were captured during fighting over the northern Syrian town of Kobani, also known as Ayn Arab, the Observatory said. There have been fierce clashes around Kobani since mid-September, when ISIS launched an assault to seize the area.

Dozens of militants and Kurdish fighters were killed in clashes overnight, the Observatory said but did not provide a breakdown.

Images posted Wednesday on social media networks show women's heads placed on a cement block, said to be in the northern Syrian city of Jarablous, which is held by militants.

The photos could not be independently verified but corresponded to The Associated Press' reporting of the event.

ISIS has managed to push ahead with an assault, trying to take the beleaguered Kurdish town of Kobani despite U.S. airstrikes on their positions.

The fighting over Kobani has created one of the single largest exoduses in Syria's civil war, with more than 160,000 people fleeing into Turkey over the past few days, the U.N. humanitarian chief Valerie Amos said Tuesday.

Turkish lawmakers, meanwhile, where set to debate a proposal on Thursday to allow U.S. and allied forces to use military bases in the country, and possibly to send Turkish troops into Syria and Iraq to fight ISIS, according to the Reuters news agency.

Turkey has come under mounting pressure from Washington and European nations to prevent fighters crossing the border into Syria to join the ranks of Islamic extremist groups in the country. Until now, Turkey has remained largely on the sidelines of the fight on its southern borders.

Speaking Wednesday to parliament, Turkish President Recep Tayyip Erdogan said his country would "fight effectively against both ISIL (an alternate acronym for ISIS) and all other terrorist organizations within the region."

According to the Reuters news agency, Ergodan made it clear, however, that his government's ultimate objective was still to see Assad removed from power.

"We will (also) continue to prioritize our aim to remove the Syrian regime, to help protect the territorial integrity of Syria and to encourage a constitutional, parliamentary government system which embraces all (of its) citizens," said the Turkish leader.

Iraqi Kurdish fighters, known as peshmerga, were doing the bulk of the fighting on the ground as a U.S.-led coalition carried out an aerial assault against ISIS in both Iraq and Syria. Britain joined the air campaign Tuesday, carrying out its first strikes against the extremists in Iraq - though it does not plan to expand into Syria.

The goal of the campaign is to push back the militant group that has declared a self-styled caliphate, or "Islamic State," ruled by its brutal interpretation of Islam in territory it has seized across much of Iraq and Syria.

On Tuesday, Kurdish fighters in Iraq said they saw some of the heaviest fighting yet. Peshmerga spokesman Halgurd Hekmat told The Associated Press the Kurds seized the border crossing of Rabia, which the extremists captured in their blitz across Iraq over the summer.

Rami Abdurrahman, the director of the Britain-based Syrian Observatory for Human Rights, also said the Kurds had retaken the border post. He said Syrian Kurdish militiamen, who control the Syrian side of the frontier, had helped in the fight.

Kurds wounded in the fighting were brought to a makeshift clinic in the town of Salhiyah, where dusty and exhausted, they described savage battles, with militants sniping at them from inside homes and from the windows of a hospital in Rabia.

"They're such good fighters," said one soldier, resting outside the clinic on a rock surrounded by blood-soaked bandages. He refused to be identified because he was not a senior officer. "They're fighting with weapons the Iraqi military abandoned - so, American weapons really."

Fighters at the clinic described how the peshmerga first took the town of Mahmoudiya near the Syrian border on Monday, then moved down the highway to assault Rabia. The two sides had intense clashes overnight, with ISIS snipers shooting from inside houses and setting off roadside bombs.

Peshmerga fighters advanced on a five-story hospital in the city, only to be ambushed by some two dozen militants inside, the fighters said.

Hekmat said the Kurdish fighters intended to push further south toward the town of Sinjar, which the extremists took last month, prompting the flight of members of the small Yazidi religious sect.

In Britain's first airstrikes of the campaign, two Tornado jets hit a heavy weapons post and an armored vehicle being used by the militants to attack Kurdish forces in northwest Iraq, British Defense Secretary Michael Fallon said in London.

In Washington, Pentagon spokesman Navy Rear Adm. John Kirby said the U.S. and its coalition partners conducted 20 strikes in Iraq and Syria against fixed and mobile targets. So far, about 306 air attacks have been conducted - more than 230 in Iraq and the rest in Syria, he said.

He said the strikes were having an effect because the extremists have changed their tactics - blending in more with the local population, dispersing and refraining from communicating as openly as they once did.

But, he said, that "doesn't mean they aren't still trying, and in some cases succeeding, at taking and holding ground."

"No one should be lulled into a false sense of security by accurate airstrikes," he said. "We will not, we cannot bomb them into obscurity."