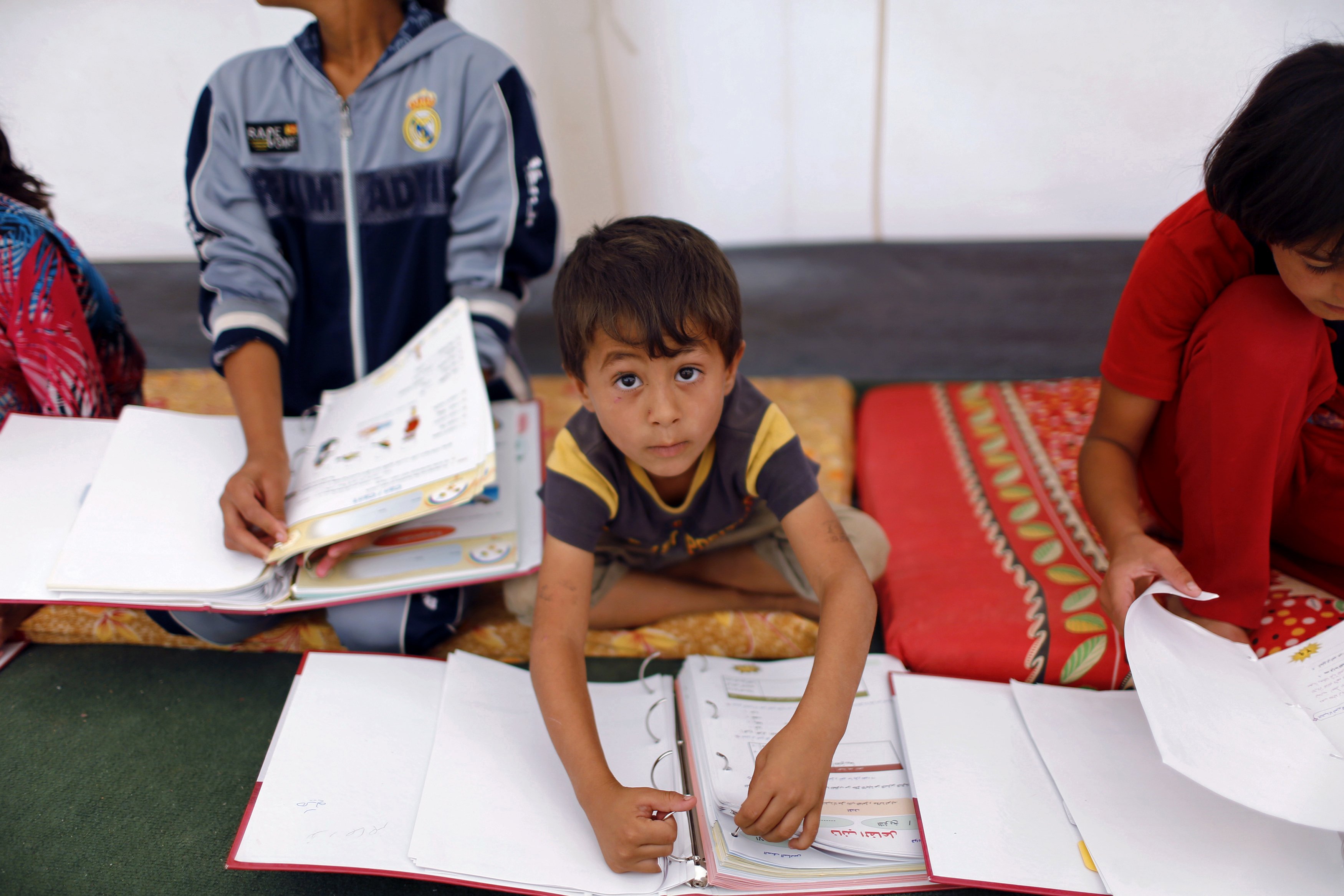 BAGHDAD -- The extremist-held Iraqi city of Mosul is set to usher in a new school year. But unlike years past, there will be no art or music. Classes about history, literature and Christianity have been "permanently annulled."

The Islamic State of Iraq and Syria (ISIS) has declared patriotic songs blasphemous and ordered that certain pictures be torn out of textbooks.

But instead of compliance, Iraq's second largest city has - at least so far - responded to the Sunni militants' demands with silence. Although the extremists stipulated that the school year would begin Sept. 9, pupils have uniformly not shown up for class, according to residents who spoke anonymously because of safety concerns. They said families were keeping their children home out of mixed feelings of fear, resistance and uncertainty.

"What's important to us now is that the children continue receiving knowledge correctly, even if they lose a whole academic year and an official certification," a Mosul resident who identified himself as Abu Hassan told The Associated Press, giving only his nickname for fear of reprisals. He and his wife have opted for home schooling, picking up the required readings at the local market.

The fall of Mosul on June 10 was a turning point in Iraq's war against the jihadi group that calls itself the Islamic State. The U.S.-trained Iraqi military, harassed for months by small-scale attacks, buckled almost instantly when militants advanced on the city. Commanders disappeared. Pleas for more ammunition went unanswered. In some cases, soldiers stripped off their uniforms and ran.

The city would come to represent the expanding power and influence of the extremist group, which was born in Iraq but spread to Syria, where it grew exponentially in the chaos of the country's civil war. Abu Bakr al-Baghdadi, the group's reclusive leader, made his first video appearance in Mosul in July to announce his vision for a self-styled caliphate - an Islamic state - of which he would be the caliph, or leader.

Part of the ISIS group's core strategy is to establish administration over lands that it controls to project an image of itself as a ruler and not just a fighting force. In parts of Syria under its control, the group now administers courts, fixes roads and even polices traffic. It recently imposed a curriculum in schools in its Syrian stronghold, Raqqa, scrapping subjects such as philosophy and chemistry, and fine-tuning the sciences to fit with its ideology.

In Mosul, schools have been presented with a new set of rules, advertised in a two-page bulletin posted on mosques, in markets and on electricity poles. The statement, dated Sept. 5, cheered "good news of the establishment of the Islamic State Education Diwan by the caliph who seeks to eliminate ignorance, to spread religious sciences and to fight the decayed curriculum."

The new Mosul curriculum, allegedly issued by al-Baghdadi himself, stresses that any reference to the republics of Iraq or Syria must be replaced with "Islamic State." Pictures that violate its ultra-conservative interpretation of Islam will be ripped out of books. Anthems and lyrics that encourage love of country are now viewed as a show of "polytheism and blasphemy," and are strictly banned.

The new curriculum even went so far as to explicitly ban Charles Darwin's theory of evolution - although it was not previously taught in Iraqi schools.

Abu Hassan and his fellow residents acknowledge the risks involved in keeping the children at home, but say that protecting their minds is equally important. "They will brainwash them and contaminate their thoughts," he said.

This past weekend, some families said that a new statement from ISIS began circulating through the city, demanding that students show up for class on Tuesday. Others said they never received the notice.

Since the earliest days of the militant onslaught on Mosul, some residents who have remained have welcomed the insurgents wholeheartedly.

"As the people say, it is better than government," one doctor told CBS News correspondent Holly Williams in June. "Because they gave them freedom."

But others have risked death to protect their city and assert their defiance. In July, militants threatened to blow up its most prominent landmark, the 840-year old Crooked Minaret that leans like Italy's Tower of Pisa. Residents sat on the ground and linked arms to form a human chain, protecting the ancient structure from sharing the fate of more than half a dozen mosques and shrines flattened by the militants who declared them dens of apostasy.

Even as foreign intervention, led by U.S. airstrikes, begins to take form and make headway, the group's tight grip on Mosul appears, for now, unrelenting, with many of the militants burying themselves in heavily populated city centers.

It was unclear whether teachers and school administrators have also stayed home rather than show up for work.

In the Sept. 5 statement posted across Mosul, the "caliph," al- Baghdadi, calls upon professionals in Iraq and abroad "to teach and serve the Muslims in order to improve the people of the Islamic state in the fields of all religious and other sciences."

Gender-segregated schools are not new to Iraq, which legally prohibits co-ed classes beyond age 12, with some segregating from a much younger age. However, in Mosul, the new guidelines declared that teachers must also be segregated, with men teaching at boys' schools, and women teaching girls.

The Education Ministry in Baghdad says it has virtually no contact with Mosul and other towns and cities in nearly one-third of the country ruled to some degree by ISIS. "The situation in Mosul is so difficult because it is far too dangerous for us to know exactly what is happening," said Salama al-Hassan, a spokeswoman for ministry.

Students also face hardships elsewhere across Iraq amid growing pressure to cater to more than 1.8 million people people displaced by the militants' advance. Nationwide, the school year has been delayed by a month, because many schools have been converted into makeshift shelters for displaced people from regions seized by ISIS. In Baghdad alone, 76 schools are occupied by displaced Iraqis, al-Hassan said.

"All of this has a serious impact on the psychology of the students," she added. "We want to approach this subject in a way that boosts the confidence and spirit of the students and helps them to understand what is happening in the country without instilling them with fear."

For residents in Mosul and other areas now ruled by the militant group, fear is unavoidable.

The education statement put out by the militants in Mosul ends with a chilling reminder of its willingness to use brutal force. "This announcement is binding," it concludes. "Anyone who acts against it will face punishment."