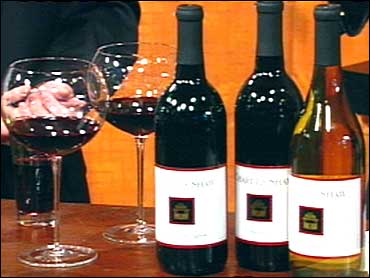 It's a phenomenon unlike any other to hit the wine market - the burgeoning sales of Charles Shaw label wines.

In the last year or so the new wine has become wildly popular - possibly because it sells for an astonishing $1.99 a bottle.

But is the wine any good? Joshua Wesson, wine critic and co-founder of the "Best Cellars" retail wine chain says the wine, wittingly called "Two-Buck Chuck," is appropriately named because it is "hamburger helper. That's what you should serve it with."

Wesson refers to it as the "ultimate anti-cult wine." In the past, people equated taste with price. The assumption was the more you paid for a bottle, the better the wine. In the late '90s, people couldn't spend enough on a bottle of wine.

Now, opinion has taken a 180-degree turn. People want the biggest bang for the least amount of money. Psychologically, the buyer is tricked into believing he or she is getting a deal - paying $2 or $3 for a $10 bottle of wine. But, Wesson points out, it's simply repackaged bulk wine.

"I call it a moment in time wine, because there's so much grape juice out there that it is a glut, and wines like this are draining the wine lake and making it possible for consumers to buy wine cheaper than frappuccino," Wesson says.

He notes there is a stigma attached to the bag-in-a-box, screw top or jug packaging. So now people don't need to feel unsophisticated for buying cheap wine.

"They sort of upgraded and put into nicer clothing bag-in-the-box wine. They put a cork in. Put a nice bottle on it and a label and voila, you've got Two-Buck Chuck," Wesson says.

According to Wesson, three of the four Charles Shaw varieties aren't very good. Only the cabernet is OK - characterized by Wesson as non-descript, and likening the taste to the best "airline" reds offered. Overall, Wesson believes the wine is too manipulated, lacking a natural taste.

He invited The Early Show co-anchor Harry Smith to taste it in a wineglass and Smith found it a little bit sweet, but OK.

Wesson jokes, "It's not going to hurt you. You're going to be able to have children after you drink this wine." Then, he asked Smith to try the same wine in a juice glass. Smith said it tasted better that way.

Wesson explains why, "Because you don't want to have the aromatics too exaggerated because there's not a lot there that you really want to look at. You want to drink it, grip it, gulp it and see you later."

Wesson agrees this glut wine, along with others, has launched a phenomenon. And although the bubble may burst in 5 or 6 months when the bulk wine supply is drained, he says this might have been the best thing to happen to the industry - fundamentally changing people's expectations.

"It's certainly put a harsh light on expensive wines - exposing the lack of value of a $100 bottle of wine," he says.

Wesson goes on to say, "The stunning comparisons show there is no direct relationship between price and taste; $4, $6, $7 wines can offer value and it's brought a slice of wine drinkers to drink wine on a regular basis - taking marginal consumers and making them regular consumers." Bottom line, Wesson says, is that it's allowed us not take wine so seriously.