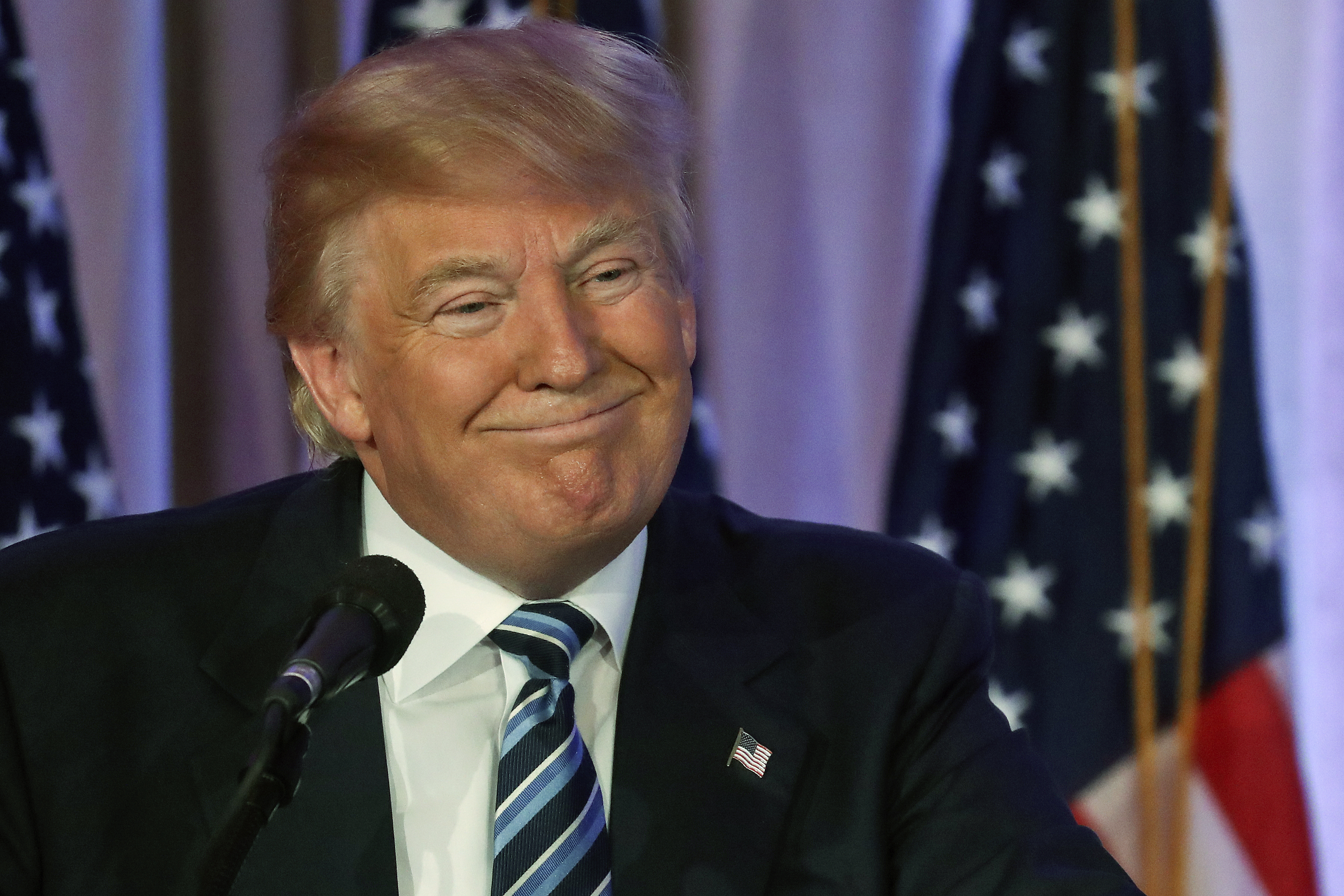 Donald Trump is trying to confuse us.

Or maybe not. Maybe he's just perpetually confused himself. But it's evident by now that Trump not only has a habit of contradicting himself, but of delivering totally different statements within seconds or minutes of each other.

This is not a new trick. When pressed on a question they don't want to answer, normally succinct politicians can revert to speaking in pure gobbledygook because it makes the press less likely to report what they say. Reporters like a nice, clean quote; word salads do not make for good copy.

This was a truth Dwight Eisenhower knew well. "[T]he language of his press conferences was notoriously vague," the historian Fred Greenstein once noted. And it was vague for a reason -- he wanted to leave journalists unsure of what he had just said.

One great example came during the 1958 Taiwan Strait Crisis, in which Taiwan and the People's Republic of China nearly went to war over small islands claimed by both nations. Jim Haggerty, Eisenhower's press secretary, warned the president that he would likely be asked how the U.S. would respond if the islands were invaded from the mainland. There was no good answer to the question -- and a wrong one could trigger a major war -- yet Eisenhower was unconcerned.

And confuse them he did; the eventual answer was both long-winded and obtuse. Eisenhower basically gave a baffling non-answer suggesting that he knew a lot about war and that he'd pray about it. American voters were reassured, and Beijing was left, as Greenstein wrote, "uncertain what price it would pay" for taking the islands.

The stakes for Trump are considerably lower, but the vague non-answer answer is a rhetorical trick he keeps reverting to. And while he's considerably less eloquent than Eisenhower in his responses, the effect is the same: the press is left unsure of what he meant, or even whether he meant anything at all.

"Did he just announce a new policy?" we ask ourselves. "Did he misspeak? Reverse himself? Has he ever considered this question before?" The result is that objective reporters, wary of editorializing, produce stories that are really just transcripts of what Trump just said. Trump's message, whatever it may be, is then transmitted to the larger public, and they can make of it what they will.

We've seen at least two examples of Trump doing this in the past week alone. The first happened on Tuesday, when he was pressed by CNN's Anderson Cooper about tweeting out an unflattering picture of Heidi Cruz.

First, Trump insisted he thought it was a nice photo of Mrs. Cruz. Then he said that Cruz had "started it" because an anti-Trump's group had mailed out a picture of a scantily -clad Mrs. Trump. Then Trump blamed people close to Mitt Romney before bragging about how successful his wife had been as a model.

"Can you just leave wives out of this?" Anderson asked, finally.

"Absolutely," Trump agreed, before launching into another spiel about how Cruz had started it, and that he didn't want to talk about it, and that we should be talking about trade deals instead.

"Can you say tonight, though, no more such talk about wives?" Anderson followed-up.

"Oh, absolutely," Trump said. "I don't want to talk about that."

Seven answers. Oh, wait, I forgot he also hinted that Ted Cruz had illegally coordinated with an outside super PAC. Eight answers.

A day later, Trump tussled with MSNBC's Chris Matthews about some of the Republican front-runner's statements about nuclear weapons. Matthews asked why Trump refused to rule out using nuclear weapons in otherwise conventional conflicts; Trump responded by asking Matthews why he wouldn't use nukes.

Trump tried to pivot to NATO, to the Iraq War. They traded hypotheticals. Matthews asked if Trump would at least say he wouldn't use nuclear weapons in Europe.

"Just say it: 'I will never use a nuclear weapon in Europe,'" Matthews pushed.

Trump refused, insisting that he wouldn't take "any cards off the table."

Then Trump seemingly reversed himself, before quickly reversing back.

"I'm not going to use nuclear," Trump said, "but I'm not taking any cards off the table."

The media mostly ran with the latter. But should he ever feel he needs to, Trump will surely insist he meant the former.

The truth, in both cases, is that Trump attracted a lot of coverage for saying things that were both a) incendiary and b) utterly meaningless and incomprehensible. And he does this all the time.

Perhaps the single best example is when Ben Carson endorsed him at a press conference earlier this month. Carson said he believed that there were two Trumps -- the insult-prone showman we're all familiar with and a "cerebral" one we don't.

Trump, at first, agreed. "There are two Donald Trumps," he said, when asked about Carson's comments.

It's very difficult to fact-check a sentence containing two contradictory statements, or decipher meaning from nothingness, particularly when the contradictions and meaningless statements come at such a dizzying pace. It's impossible to know how many Donald Trumps are lurking around in Donald Trump's head.

So intentionally or not, Trump has confused us. We have no real idea what policies he would embrace in the general election, let alone as president. And we have no way of knowing what he sincerely believes at any given moment and what he'll abandon with his next breath, even when it comes to his bedrock issues like immigration and trade.

Is this all evidence of sophisticated, Eisenhower-esque guile on the part of Trump, or is he just thinking out loud, inventing answers to questions he's never considered as he goes along? I'd wager it's a bit of both -- Trump is, if nothing else, a studied manipulator of the media. He's also not one who's shown any kind of natural understanding of the nuances of policy, a fact that many of his supporters would readily admit. He sells himself as a big picture guy, someone who understands elemental truths that the eggheads and party hacks always miss.

There is, however, at least one crucial difference between Eisenhower's vagueness and Trump's. Ike confused the press in a way that could still reassure the public; Trump, if the latest general election polls are any indication, has only figured out half that equation.