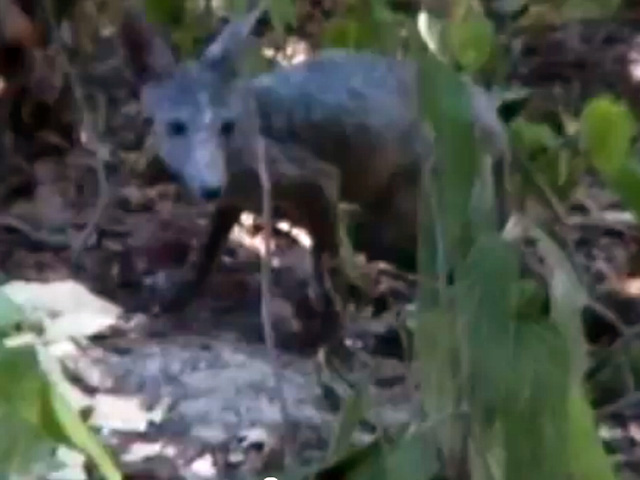 A bizarre beast said to combine the characteristics of a kangaroo, dog, rat and deer was captured last week by workers at Prince George's Hospital Center in Maryland near the nation's capital.

Technicians on a smoke break wandered near a wooded area and found the strange, nearly hairless animal. The workers took cellphone videos of the beast, and eventually lured it into a cage with Chinese food as bait. Local news reporters interviewed the hospital workers, who offered a variety of opinions about the beast's identity.

"It's a kangaroo, dog, rat mixed," X-ray technician Joe Livermore told the local NBC affiliate. "It's got a rat tail and a head like a deer. I don't know what it is."

The shy animal was dubbed "Prince Chupa" after the mysterious vampire chupacabra, and already some are wondering if the bloodsucker has finally been captured alive.

The chupacabra dates back to 1995, when an eyewitness sighted the monster in Puerto Rico. In my book, "Tracking the Chupacabra," I provide evidence showing that the original chupacabra report described a monster in a science-fiction film, and most likely no beast ever existed. Since then, no hard evidence of the chupacabra has emerged, and the myth has been kept alive by occasional reports of animals identical to Prince Chupa.

So it's not a chupacabra: but what is it?

Many veterinarians and other animal experts are hesitant to offer opinions about mysterious creatures because it can be difficult to identify an animal from just a photo or video. Many animals, especially in the Canidae family (which includes dogs, coyotes, foxes, and wolves), can look very similar, and the exact species may only be distinguished by personally examining details such as skull shape, tail length and so on (or DNA analysis). If experts miss a detail in a fuzzy photo or video and get it wrong, they can look foolish.

That said, we can tell from the video that it's clearly a canid; many suspect a fox. Most people know what a fox looks like -- and it's not a kangaroo-dog-rat-deer-looking thing -- unless its hair has fallen out because of disease. Prince Chupa probably has a bad case of mange, a parasitic skin infection caused by mites. Because people usually see animals with their full coat of fur, animals with mange can be difficult to identify.

So let's do the math. It's about the size of a fox; foxes live in the area. Prince Chupa's tail looks similar to what you'd see on a hairless fox: long, thin and ratlike. All signs point to it being a fox -- although perhaps one with a longer-than-normal tail -- with a bad case of mange.

The beast was eventually set free, and unless it is recaptured and subjected to DNA analysis, we may never know exactly what it is.