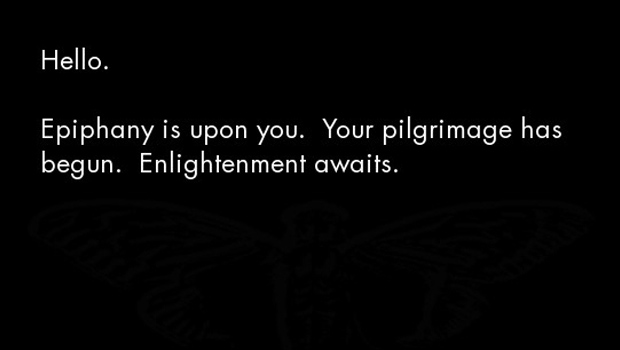 Break out your tinfoil hats. The next installment of a mysterious code-breaking scavenger hunt may have been released on Monday.

According to contributing editors of a Wikia.com page on the topic, a tweet from the Twitter account that was previously associated with Cicada 3301 has posted a link to a photo on the site Imgur.com. There have been nearly a dozen photos claiming to be the 2014 clue for the puzzle posted on the image sharing board 4chan.org over the weekend, but many have been debunked.

Like with previous years, the apparent clue is white text on a black background. This time it reads, “Hello. Epiphany is upon you. Your pilgrimage has begun. Enlightenment awaits. Good luck. 3301.”

Participants in the online quest are still trying to verify any clues that come in, but the photo posted on Twitter seems to be the closest to being a legitimate piece of the puzzle.

In January 2012, a mysterious photo appeared on 4chan. It was the first known clue of the Cicada 3301 online puzzle, and it kicked off a scavenger hunt that involved online images, cryptography, number theory, physical clues, phone calls, QR codes and websites on the “darknet.”

A handful of Wikia contributors have already started working on possible solutions to the puzzle -- posting all clues to the game, noting which appear to be legitimate and which are likely fake.