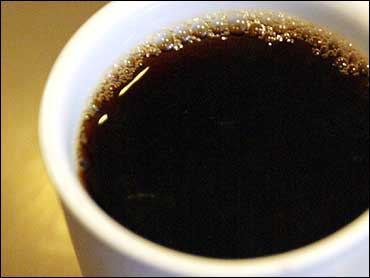 Jack Ladenson is one of thousands of Americans bothered by caffeine. The older he gets, he says, the more he switches to decaf coffee.

The problem is he never trusts what he's getting in coffee bars or restaurants. So Ladenson, a chemist, is working on a dipstick that would measure levels of caffeine on the spot.

What he envisions is something that might work similar to a home pregnancy strip.

"We hope to configure a test that could be used by anybody," said Ladenson, who is leading a group of scientists at Washington University in the effort.

One of the challenges is that there is no test that can measure caffeine in a hot beverage. But the scientists have found a solution to that problem — immune system proteins called antibodies from camels and llamas.

For some reason the antibodies of these creatures are able to hold up to high heat.

The researchers injected a caffeine derivative in llamas and camels over a period of a few months, and in time, the animals produced antibodies as an immune response to the foreign substance. Then researchers made copies of their antibodies in the lab and studied how they reacted to caffeine.

The antibodies bind to caffeine, thus allowing a measurement of caffeine content, Ladenson said. The antibody test's accuracy compares well with measurements made by sophisticated equipment, according to the researchers whose findings will appear in the June 1 issue of the American Chemical Society's journal, Analytical Chemistry.

The Washington University study "reinforces what we've said many times" — that camel antibodies "have a bright future," said Serge Muyldermans, a bioengineer and professor at Vrije Universiteit Brussel, VIB in Belgium.

Muyldermans was among the group of scientists who first published research about this animal family's scientifically flexible antibodies.

"If you want to determine the amount of caffeine in a hot cup of coffee, your antibody needs to withstand those temperatures," he said.

Ladenson said he couldn't predict when his hoped-for caffeine dipstick might be commercially available. He said he has filed a patent application.