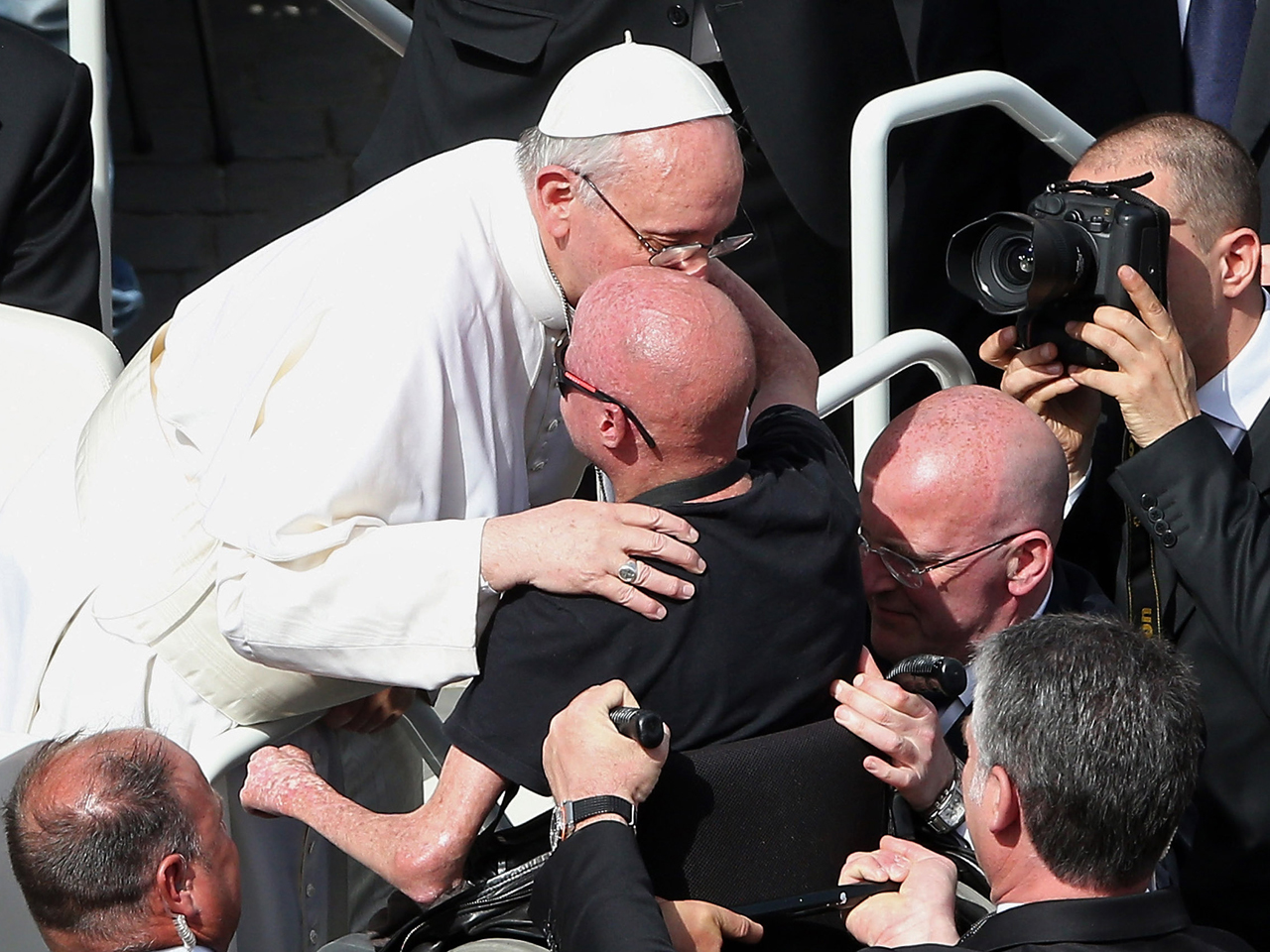 The case concerns a 43-year-old husband and father who traveled to Rome from Mexico to attend Francis' Mass on Sunday in St. Peter's Square. At the end of the Mass, Francis blessed several wheelchair-bound faithful as he always does, including a man possessed by the devil, according to the priest who brought him, the Rev. Juan Rivas.

Francis laid his hands on the man's head and recited a prayer. The man heaved deeply a half-dozen times, shook, then slumped in his wheelchair.

The images, broadcast worldwide, prompted the television station of the Italian bishops' conference to declare that according to several exorcists, there was "no doubt" that Francis either performed an exorcism or a simpler prayer to free the man from the devil.

The Vatican was more cautious. In a statement Tuesday, it said Francis "didn't intend to perform any exorcism. But as he often does for the sick or suffering, he simply intended to pray for someone who was suffering who was presented to him."

The Rev. Gabriele Amorth, a leading exorcist for the diocese of Rome, said he performed a lengthy exorcism of his own on the man Tuesday morning and ascertained he was possessed by four separate demons. The case was related to the legalization of abortion in Mexico City, he said.

Amorth told RAI state radio that even a short prayer, without the full rite of exorcism being performed, is in itself a type of exorcism.

"That was a true exorcism," he said of Francis' prayer. "Exorcisms aren't just done according to the rules of the ritual."

Rivas took the Vatican line, saying it was no exorcism but that Francis merely said a prayer to free the man from the devil.

"Since no one heard what he said, including me who was right there, you can say he did a prayer for liberation but nothing more," Rivas wrote on his Facebook page, which was confirmed by his religious order, the Legionaries of Christ.

Fueling the speculation that Francis did indeed perform an exorcism is his frequent reference to Satan in his homilies — as well as an apparent surge in demand for exorcisms among the faithful despite the irreverent treatment the rite often receives from Hollywood.

Who can forget the green vomit and the spinning head of the possessed girl in the 1973 cult classic "The Exorcist"?

In his very first homily as pope on March 14, Francis warned cardinals gathered in the Sistine Chapel the day after he was elected that "he who doesn't pray to the Lord prays to the devil."

He has since mentioned the devil on a handful of occasions, most recently in a May 4 homily when in his morning Mass in the Vatican hotel chapel he spoke of the need for dialogue — except with Satan.

"With the prince of this world you can't have dialogue: Let this be clear!" he warned.

Experts said Francis' frequent invocation of the devil is a reflection both of his Jesuit spirituality and his Latin American roots, as well as a reflection of a Catholic Church weakened by secularization.

"The devil's influence and presence in the world seems to fluctuate in quantity inversely proportionate to the presence of Christian faith," said the Rev. Robert Gahl, a moral theologian at Rome's Pontifical Holy Cross University. "So, one would expect an upswing in his malicious activity in the wake of de-Christianization and secularization" in the world and a surge in things like drug use, pornography and superstition.

In recent years, Rome's pontifical universities have hosted several courses for would-be exorcists on the rite, updated in 1998 and contained in a little red leather-bound booklet. The rite is relatively brief, consisting of blessings with holy water, prayers and an interrogation of the devil in which the exorcist demands to know the devil's name, how many are present and when they will leave the victim.

Only a priest authorized by a bishop can perform an exorcism, and canon law specifies that the exorcist must be "endowed with piety, knowledge, prudence and integrity of life."

While belief in the devil is consistent with church teaching, the Holy See does urge prudence, particularly to ensure that the victim isn't merely psychologically ill.

The Rev. Giulio Maspero, a Rome-based systematic theologian who has witnessed or participated in more than a dozen exorcisms, says he's fairly certain that Francis' prayer on Sunday was either a full-fledged exorcism or a more simple prayer to "liberate" the young man from demonic possession.

He noted that the placement of the pope's hands on the man's head was the "typical position" for an exorcist to use.

"When you witness something like that — for me it was shocking — I could feel the power of prayer," he said in a phone interview, speaking of his own previous experiences.

The Vatican spokesman, the Rev. Federico Lombardi, sought to temper speculation that what occurred was a full-fledged exorcism. While he didn't deny it outright — he said Francis hadn't "intended" to perform one — he stressed that the intention of the person praying is quite important.

Late Tuesday, the director of TV2000, the television of the Italian bishops' conference, went on the air to apologize for the earlier report.

"I don't want to attribute to him a gesture that he didn't intend to perform," said the director, Dino Boffo.

That said, Francis' actions and attitude toward the devil are not new: As archbishop of Buenos Aires, the former Cardinal Jorge Mario Bergoglio frequently spoke about the devil in our midst.

In the book "Heaven and Earth," Bergoglio devoted the second chapter to "The Devil" and said in no uncertain terms that he believes in the devil and that Satan's fruits are "destruction, division, hatred and calumny."

"Perhaps its greatest success in these times has been to make us think that it doesn't exist, that everything can be traced to a purely human plan," he wrote.

Italian newspapers noted that the late Pope John Paul II performed an exorcism in 1982 — near the same spot where Francis prayed over the young disabled man Sunday.