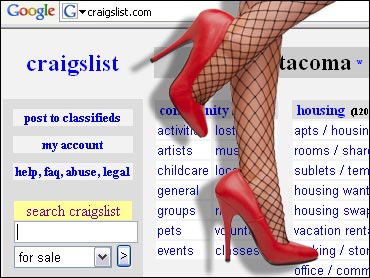 Catherine is a 35-year-old sex worker in San Francisco who relies on Craigslist to reduce the physical risks often faced by a woman in her line of work.

"Craigslist is important to helping us avoid violence," says the woman, who is originally from Europe. "Craigslist is a way to filter out that kind of person ... and with Craigslist there is no need for pimps."

For people in her trade, she adds in a thick accent, "Craigslist is vital."

It is also why Chicago Cook County Sheriff Tom Dart on Thursday sued the popular Internet classified service, accusing Craigslist of being one of the largest sources of prostitution in the country.

"This (lawsuit) was my act of last resort," Dart said. "We're seeing some outrageous stuff here that we hadn't seen before. Our people on the street have seen the volume increase. It's become much more complicated for us. We can debate the whole 'Pretty Woman' thing. If a woman decides that this is a viable choice for employment, but that isn't the ones we're focused on."

He detailed how women were performing sex acts while their children were unattended in the next room. Dart described the many juveniles arrested when police followed up on suspicious Craigslist ads.

"We arrested numerous juveniles over the last two years," Dart said. "What we found is that they weren't advertised as juveniles in most of them. We walk in to hear: 'You want a juvenile? We got a juvenile. You'll have to pay more but we have her for you.'"

At the same time, however, this is a story that underscores how one of the world's newest technologies has become a vital part of one of the world's oldest occupations. For the majority of Craigslist users - the millions who sell sofas, rent rooms, or find Spanish tutors every day - a steamy online brothel juxtaposed with Craigslist's plain-wrap classified pages may seem unlikely. But with the emergence of the Internet as a vital communications medium, it was only a matter of time before sex for hire infiltrated the listings on Craigslist as well.

A Craigslist spokeswoman said Thursday that criminal acts are rare at the site compared with the overwhelming amount of legal activity. She added that Craigslist helps law enforcement track down criminals every day. (In response to the sheriff's lawsuit, Craigslist can claim to be immune from liability thanks to Section 230 of the 1996 Communications Decency Act.)

Catherine, who has lived in the United States for 10 years, spoke with
CNET News on the condition that she would remain anonymous. She asked to be identified in the article as "Catherine," after the actress, Catherine Deneuve, who played the role of a young housewife moonlighting as a prostitute in the film "Belle de Jour."

Taking issue with Dart's portrayal, Catherine argued that Craigslist provided a safety net for her and other sex workers who use the service to screen out prospective clients who may be violent. Craigslist and the Internet give her a chance to communicate with a client to weed out those she senses may not be acceptable.

Tune in to CBS News' "The Early Show" next week for a special report on everything you need to know before getting on Craigslist.

If access to Craigslist's bulletin board listings was shut off, Catherine says that many sex workers would be walking the streets.

Craigslist and the police

A 1997 article in the New York Times reported that a covert police ad on Craigslist in November by Seattle police led to the arrests of 71 men, including a bank officer, a construction worker and a surgeon. Police in Jacksonville, Fla. posted a single ad that drew 33 responses.

An ad he posted from a woman named "Summer" drew a response from a
39-year-old man named Christopher Scarberry, who used the e-mail address wolfnursehunter@yahoo.com. Even after learning that "Summer" was 13 years old, he agreed to meet her at a parking garage and said he would be driving a white Chevrolet Corsica.

Santa Rosa police arrested Scarberry, and discovered $145 in cash on his person. He admitted to responding to the ad, but during the subsequent trial objected to the detective's claim that the encounter clearly involved sex for money. (He was sentenced to probation and was required to register as a sex offender.)

Det. Conners nabbed another respondent the same month. Again using the name "Summer," Conners posted an ad saying: "i talked 2 sum of u last week but I wuznt able 2 meet w/ some of u. i made some last week and it wuznt so bad, so im tryin to make a little more, can u help me out? i dont have pics, but im yung, cute, and blond bjs 100."

This time Michael Harris, a 45-year-old welfare investigator for the Department of Social Services in nearby Mendocino County replied. Using the name "hardbody_hercules," Harris typed: "I must have missed your ad last week, sounds pretty interesting. I'd love to know what's up. Want to fill me in on the details. I'm off work all day and need to get into something special, might that be you. Hit me up."

"Summer" replied by saying she was 13 and the two agreed to meet. Santa Rosa detectives posing as skateboarders arrested Harris at the parking garage, where they found $100 and four flavored condoms in his pockets. Harris was convicted of one felony count of attempting to commit a lewd and lascivious act on a child under 14.

In New York City, an FBI agent had the same idea, posting an ad on Craigslist that offered the "freshest, youngest girls."

Timothy McDarrah, the 43-year-old former "Hot Stuff" editor at US Weekly magazine, replied. He asked "what it'll cost for the cutest white 14 year old girl with a pony tail in the whole 8 grade." McDarrah agreed to pay $200 for oral sex on July 7, 2005, but never showed up to the rendezvous.

He did continue to chat online with an undercover FBI agent posing as 13-year-old "Julie," and was eventually arrested, convicted of using a computer to entice a minor into having sex, and sentenced to 6 years in prison.

Detective John Harrigan on the vice squad of the Long Beach Police Department replied to a Craigslist ad by "Katie," who offered $200 for "a nude rubdown," or $250 for "full service with protection," apparently meaning intercourse with a condom. The woman, Sandra Kole, and her pimp, Robert Pimental, were arrested. (Pimental was sentenced to three years in prison for pimping.)

A Craiglist investigation by the San Francisco Police Department zeroed in on advertisements for a 19-year-old woman named "Stacy." Police discovered that she was really 14 years old and staying with her pimp in a Quality Inn in South San Francisco.

Neither the police nor advocacy groups interested in the topic found any evidence of human trafficking - meaning the involvement of people under 18 years old, or situations involving coercion - at either event. Nor was there evidence of additional prostitution, at least measured by the number of arrests.

Craigslist managers said they would adopt new measures, such as requiring anyone who posted an ad in the exotic services section to provide a valid credit card and phone number. The idea is that anyone planning to break the law will be reluctant to identify themselves.

Catherine said that the measures are easily circumvented.

Dart said he might have filed suit earlier against Craigslist but was waiting to see what impact the preventive measures had.

He said: "They've made absolutely none."
By Greg Sandoval and Declan McCullagh