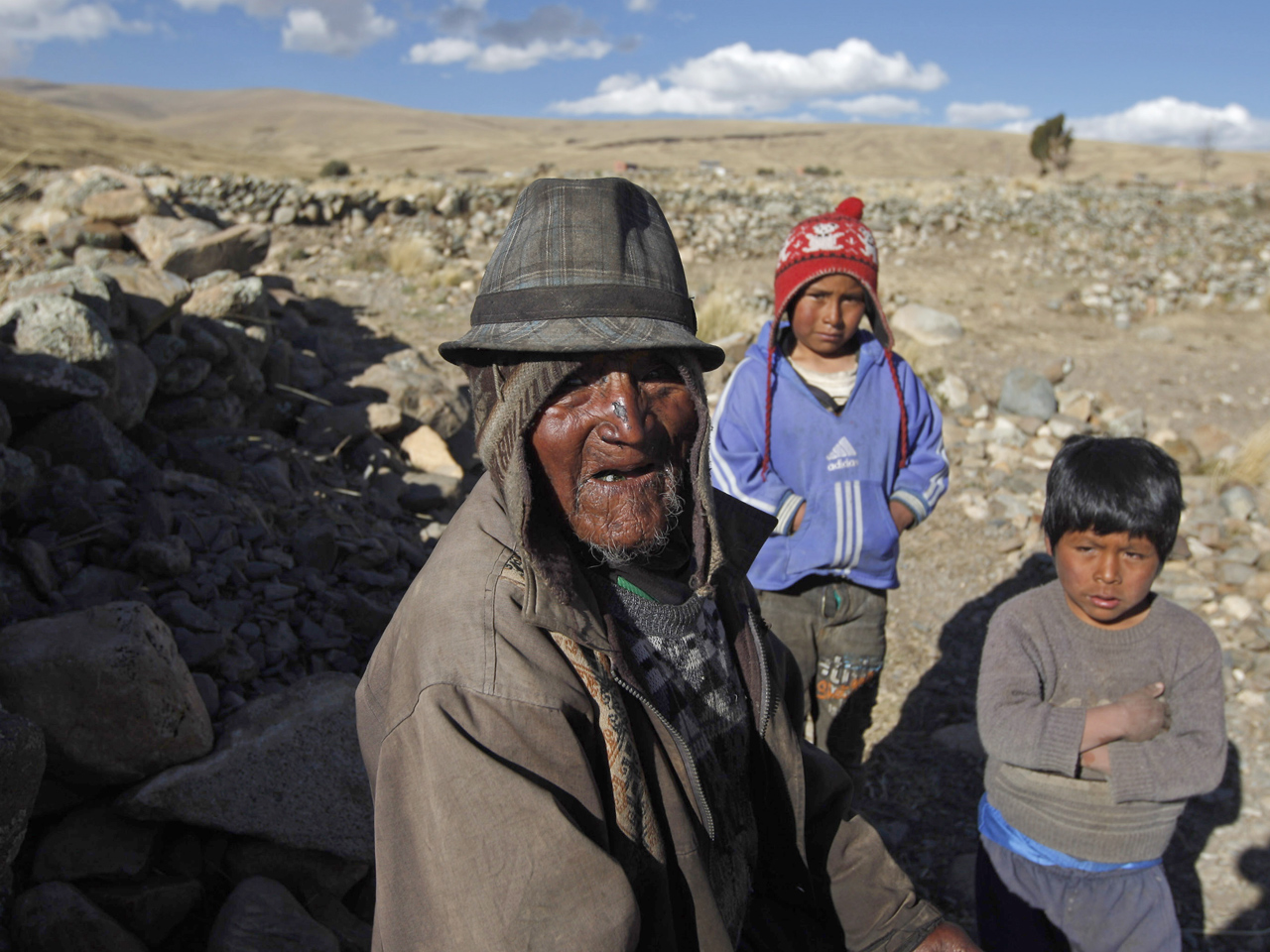 The native Aymara lives in a straw-roofed dirt-floor hut in an isolated hamlet near Lake Titicaca at 13,100 feet, is illiterate, speaks no Spanish and has no teeth.

He walks without a cane and doesn't wear glasses. And though he speaks Aymara with a firm voice, one must talk into his ear to be heard.

"I see a bit dimly. I had good vision before. But I saw you coming," he tells Associated Press journalists who visit after a local TV report touts him as the world's oldest person.

Hobbling down a dirt path, Flores greets them with a raised arm, smiles and sits down on a rock. His gums bulge with coca leaf, a mild stimulant that staves off hunger. Like most Bolivian highlands peasants, he has been chewing it all his life.

Robert Young, senior gerontology consultant with Guinness World Records, said 90 percent of all supercentenarians are female and Salustiano is currently the only male born in 1901 with proof of birth.

Guinness spokeswoman Jamie Panas said it wasn't aware of a claim being filed for the Bolivian.

"I should be about 100 years old or more," Flores says. But his memory is dim.

Flores' 27-year-old grandson Edwin says Flores fought in the 1933 Chaco war with Paraguay but he only faintly remembers.

The director of Bolivia's civil registrar, Eugenio Condori, showed The Associated Press the registry that lists Flores' birthdate as July 16, 1890.

Condori said birth certificates did not exist in Bolivia until 1940. Births previously were registered with baptism certificates provided by Roman Catholic priests.

To what does Flores owe his longevity?

"I walk a lot, that's all. I go out with the animals," says Flores, who long herded cattle and sheep. "I don't eat noodles or rice, only barley. I used to grow potatoes, beans, oca (an Andean tuber)."

The water Flores drinks originates on the snow-capped peak of Illampu, one of Bolivia's highest.

He says he doesn't drink alcohol, but imbibed some in his youth. He's eaten a lot of mutton, and though he likes pork it is hardly available. He fondly remembers hunting and eating fox as a younger man.

He sorely misses his wife, who died more than a decade ago. Of their three children only one is still alive: Cecilio, age 67. There are 40 grandchildren and 19 great-grandchildren but most have left Frasquia, a dozen homes a two-hour walk from the nearest road.

Edwin Flores, who lives next door with his wife and their two children, says his grandfather worked for the rancher who owned Frasquia until 1952, when the state seized major holdings in an agrarian reform and parceled them out to peasants.

Although electrical power arrived three years ago, time seems to have stood still in Frasquia. Peasants still prepare chuno, or dehydrated and chilled potatoes, and till the soil with ox-driven plows. Donkeys bray and sheep and cattle graze.

Most everyone is elderly or middle-aged. The young people are mostly gone.