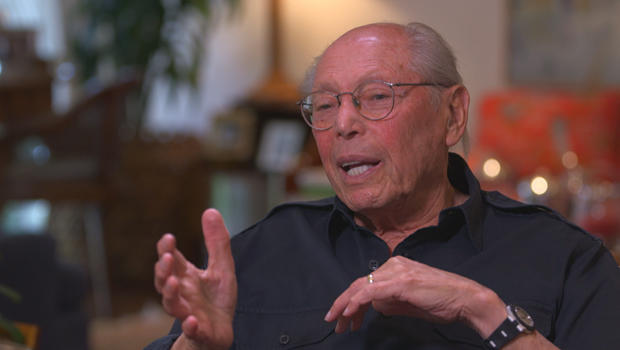 He was a Coney Island kid with nothing to lose who struck it big as a Hollywood kingmaker. Producer-director Irwin Winkler, now 88, makes movies for a living. For 52 years, Winkler has backed, bankrolled and brought to the screen better than 50 films. Maybe you've heard of a few: "Rocky," "Raging Bull," "The Right Stuff," "Goodfellas."

An impressive number, especially considering the random way he got into the business. After serving in the Army, Winkler said, he had no earthly idea what to do with his life, but he was reading a bestseller by Harold Robbins, and somehow, Winkler found his calling.

"I read 'The Carpetbaggers,' and in it there was a character who was an agent, I thought it was kind of an interesting guy, he was wearing a black suit and a white shirt and a tie. And, why not?"

Winker became an agent, and then quickly started producing films. One of his first was 1969's "They Shoot Horses, Don't They?," starring Jane Fonda as a contestant in a dance marathon during the Great Depression. It earned nine Academy Award nominations.

"When I read that script, I said, 'This is really a story worth telling,'" he said.

A few years later, Winkler was sitting in his Los Angeles office when an unknown actor named Sylvester Stallone walked in looking for work. Winkler didn't have a part for him, but then Stallone said something interesting.

"He says, 'By the way, I'm also a writer,'" Winkler recalled. "Well, I don't know what a writer looks like, but he certainly wasn't it!"

"His body language was more like a fighter than a writer."

But Stallone had an intriguing idea: "He told us the story about 'Rocky.' He said, 'I'll write the script for nothing. There's only one thing: If you like it, you have to star me in the film.'

"We gave this script to the studio, and they call and said, 'Why do you wanna make a movie about this broken-down fighter? You wanna shoot in Philadelphia? Nobody's interested in Philadelphia. And you wanna star, who? Sylvester Stallone?' And he loses?"

Rocky loses, but everyone involved with the movie wins. "Rocky" became, by far, the highest-grossing movie of 1976, the only one to break $100 million.

And Winkler and his partner, Bob Chartoff, won Best Picture, and invited Stallone up on stage with them.

Next, Winkler took on another boxing picture: "Raging Bull," with Robert De Niro as middleweight Jake La Motta, this time working with a director who would become a longtime collaborator, Martin Scorsese.

"Marty is never afraid to do anything that's different," said Winkler. "He has no fear."

Of Winkler, Scorsese recalled, "I saw him work telephones and make deals, like, in 15 minutes that were amazing. Maneuvering and working very clever aspects of different deals and different actors. If he couldn't get it done, I don't know who would."

Case in point: Scorsese wanted "Raging Bull" shot in black-and-white. The studio balked (this was 1980, not 1930). But Winkler had his back.

"The executives hated the script," Winkler recalled. He invited them to a meeting in Scorsese's apartment.

"They were asking me about the black-and-white," Scorsese said. "And then Irwin pointed out, he said, 'Look at the other two films that were in black-and-white, they were hits, 'Lenny' and 'Paper Moon.' 'Kay. Pulled that out! They were coming up to cancel the film, but [Winkler] never let us know that."

Ten years later, they teamed up again for "Goodfellas," telling the story of the rise and fall of mobster Henry Hill, and again they battled Warner Brothers executives who, Winkler said, pressed for Tom Cruise and Madonna to play the lead roles.

"I said, 'You want Madonna to play the Jewish wife of Henry Hill, the Lorraine Bracco role?'" Winkler exclaimed. "We said no. Marty started laughing, and we laughed. And then he said, 'What about Tom Cruise playing Henry Hill?' 'No.'"

Winkler said he also wasn't sold on Ray Liotta as Henry Hill. "Had anybody heard of Ray Liotta at that point?" asked Mankiewicz.

"No, especially me," said Winkler.

But Scorsese made a strong case: "I was in a Venice Film Festival, and Ray came up to me. The bodyguards went towards him. And the way he handled that I thought was very, very telling. There was a slight threat in his body language countering theirs."

"And you liked that?"

Nearly 30 years after "Goodfellas," Winkler, Scorsese, and De Niro are reuniting again for "The Irishman." The film, about the disappearance of Jimmy Hoffa, also stars Al Pacino and Joe Pesci.

Mankiewicz asked, "You're proud of 'The Irishman'?"

"I think it's terrific," Winkler said. "And I think it's also the coming together of people that have worked together since we're kids together."

To watch a trailer for "The Irishman" click on the video player below:

Quiet, and quite comfortable at his Beverly Hills home, Winkler doesn't just direct and produce; he writes, too. "A Life in Movies" is the name of his memoir.

He said he has no thoughts of retiring: "None at all. I'm healthy. My mind is good, I guess. And why not? I think age is just something. It's a number. And it depends on whether the number is gonna keep you down or keep you up."