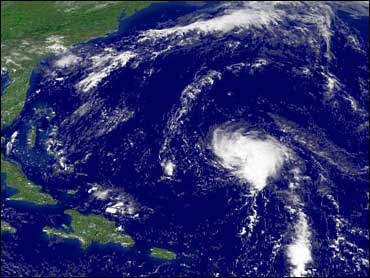 Tropical Storm Irene became better organized and stronger Thursday as it moved closer to the East Coast, but any landfall is still days away.

"We're forecasting it to become a hurricane in a few days," said James Franklin, a hurricane specialist at the the National Hurricane Center in Miami.

Irene is expected to move toward the East Coast from Georgia to Virginia over the next five days, though it was still too soon to tell what kind of threat Irene posed to land, Franklin said.

"It certainly doesn't look like the main threat is Florida, but stranger things have happened. ... It may well turn sharply enough (to the north) to not make landfall," he said.

Irene had top sustained winds near 40 mph, just above the 39 mph threshold for tropical storms. Hurricanes sustain winds of at least 74 mph.

On Thursday morning, Irene was about 515 miles south-southeast of Bermuda and moving west-northwest near 17 mph, forecasters said.

Irene broke records Sunday as the earliest ninth named storm in the Atlantic hurricane season, which began June 1 and ends Nov. 30. Normally, only two named storms have formed by this time in the season.

It weakened to a depression Monday, but regained tropical storm strength Wednesday as its wind strengthened to 35 mph, up 5 mph from earlier in the day, meteorologists said.

Earlier Wednesday, the center had said the storm was becoming disorganized and could soon dissipate. Irene was centered Wednesday morning about 810 miles southeast of Bermuda and about 455 miles northeast of the northern Leeward Islands, forecasters said.