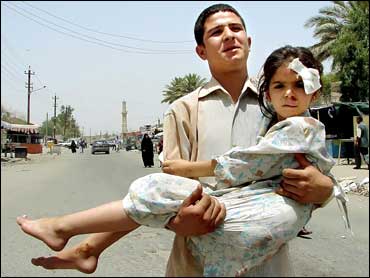 The video — as grisly as any the al Qaeda in Iraq leader issued — was clearly designed to quash hopes that the Sunni-dominated insurgency might change tactics by ending attacks on Shiite civilians and institutions, especially the police.

Fellow Sunni insurgent groups sent condolences for al-Zarqawi in Internet messages Saturday and warned Sunnis not to cooperate with the Iraqi government, an apparent call for unity three days after U.S. forces killed the terror leader in a targeted airstrike.

The condolence statements came from the al Qaeda-linked Ansar al-Sunnah — the group that posted the beheading video on a militant Web site — and the head of the Mujahedeen Shura Council, an umbrella organization of five insurgent groups, including al Qaeda in Iraq, that al-Zarqawi helped found last year.

"Iraq is the front defense line for Islam and Muslims, so don't fail to follow the path of the mujahedeen (holy warriors), the caravan of martyrs and the faithful," said Abdullah bin Rashid al-Baghdadi, the Shura Council's head.

He vowed: "As for you the slaves of the cross (coalition forces), the grandsons of Ibn al-Alqami (Shiites), and every infidel of the Sunnis, we can't wait to sever your necks with our swords."

Across Iraq, at least 24 people were killed in violence Saturday — including a number of sectarian attacks.

Gunmen stopped a minivan carrying Sunnis on a highway near Baghdad, ordered the passengers off and opened fire, killing four and wounding one. In Baghdad, gunmen in two cars shot dead a Shiite metal worker and wounded two others. Also in the capital, a roadside bomb exploded in the mainly Shiite Karadah area, targeting a police patrol; five people were killed and 14 wounded, including three officers.

The Jordanian-born al-Zarqawi was the defining face of Iraq's insurgency. His tirades against the nation's majority Shiites and calls on the once-dominant minority Sunni Arabs to rise up and kill them were matched by the killing of thousands of Shiites in attacks.

In contrast, Ansar al-Sunnah has largely refrained from killing civilians. Made up mostly of homegrown Iraqi guerrillas, the group instead has mostly gone after American and Iraqi forces as well as Iraqis and foreigners employed by the U.S. military.