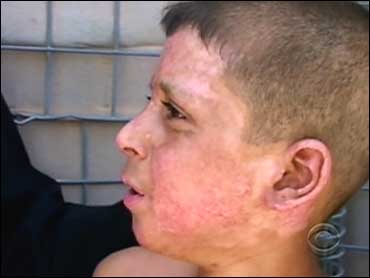 Sgt. Joe Barzeski is the closest thing in Central Iraq to a miracle worker.

And 11-year-old Ali is going to need a miracle to get over burns from a kerosene stove.

"(The skin) has to come off so that the medicine will work," Barzeski tells CBS News correspondent Elizabeth Palmer as he starts treating the child. "Plus, this will get all crusty, and scab up and that will be an ugly scar."

The soldiers turn up the radio to drown out the crying. Conditions are primitive. But even so, the burn unit is filled to capacity.

It's tucked away on a U.S. base that's known as the biggest gas station in Iraq. It's where military convoys refuel - while on the far side, Iraqi families, as many as 80 a day, wait patiently to be admitted to a clinic that's more M.A.S.H. unit than E.R.

Barzeski had no medical training before he joined the Army - so he's been learning on the job.

Many of the volunteers are tough convoy security guards. They dish out tenderness and Tylenol, or painstakingly changing burn victims' dressings while their trucks are serviced.

Haider is on his 12th visit to the clinic after he was drenched in boiling tea. Cases like his led Barzeski to invent a treatment to prevent crippling keloid scars.

"There was a boy who came in my son's age, and he couldn't turn his waist because he had these painful keloids on his hips, and that's when I decided I was going to try and do something," Barzeski said.

He treats the patients with what he calls "mayo," a blend of steroids, antibiotics and something called medi-honey - spread on the bodies of little patients to help them re-grow healthy skin.

Drugs and bandages often run dangerously low. They have to be donated - as the clinic can't draw on Army stock.

"Its against the medical rules of engagement," Barzeski said. "Since we don't cause the injury, we can't treat them with our supplies."

Despite chronic shortages, the clinic has treated more than 1,000 children. Barzeski knows most of them by name. He's got a special soft spot for Fatima.

She was in such pain last week she refused to bend her arm or walk. This week, he's sweet-talked her into physiotherapy - disguised as fun.

"She likes the music that's in there. She kept on saying "dance, dance." And I said, 'I'm not going to dance, but if you walk and you can get your arm straightened out, I'll dance with you,'" he said. "I think I'll have to dance with her with this Friday."

Here at least, the battle for hearts over minds is over. Joe Barzeski and his volunteers have won.

If you'd like information about helping the burn unit continue its service, please send us an e-mail.
View CBS News In
CBS News App Open
Chrome Safari Continue
Be the first to know
Get browser notifications for breaking news, live events, and exclusive reporting.