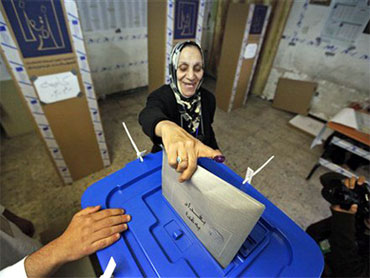 Under a blanket of tight security designed to thwart insurgent attacks, Iraqis went to the polls Sunday in an election testing the ability of the country's still-fragile democracy to move forward amid uncertainty over a looming U.S. troop drawdown and still jagged sectarian divisions.

Almost 20 million voters are eligible to turn out for the election, only the second vote for a full term of parliament since the 2003 U.S.-led invasion seven years ago this month. About 6,200 candidates are competing for 325 seats in the new parliament.

Insurgents have vowed to disrupt the elections with violence, but security was very tight across the capital where only select authorized vehicles were allowed on the streets and voters headed to the ballot box on foot. The borders have been sealed, the airport closed and hundreds of thousands of Iraqi military and police were on the streets.

Still, at least three explosions could be heard in the early morning hours although there was no information about whether anyone was hurt.

At one polling place in Baghdad's Karradah neighborhood, draconian security measures were in place with the school ringed by barbed wire, armed guards around the perimeter, and police using metal detectors to scan prospective voters.

The election has been viewed by many as a crossroads at which Iraq will decide whether to adhere to the sectarian politics - Shiites aligning with Shiites, Sunnis with Sunnis and Kurds with Kurds - that have defined its short democratic history. Or move away from the sectarian tensions that almost destroyed this Shiite majority country that was held down under Saddam Hussein's Sunni-minority rule.

Prime Minister Nouri al-Maliki is fighting for his political future against a coalition led by mainly Shiite religious groups - the Supreme Islamic Iraqi Council and a party headed by anti-American cleric Muqtada al-Sadr. He also faces a challenge from secular alliance led by former a secular Shiite, Prime Minister Ayad Allawi, who has teamed up with a number of Sunnis in a bid to claim the government.

President Jalal Talabani was among the first to vote Sunday morning in the Kurdish city of Sulamaniyah. Talabani's party, the Patriotic Union of Kurdistan, is enmeshed in a tight race with an upstart political party called Change which is challenging the two Kurdish parties who have dominated Iraqi politics for years.

Nouri al-Maliki: The prime minister is seeking a second, four-year term in office, contesting this election at the head of his State of Law Coalition. Al-Maliki took office in May 2006 after winning the premiership as a compromise candidate put forward by Shiite parties. He has since asserted his authority and overseen the dramatic drop in violence that followed a 2007 U.S. troop buildup. Al-Maliki has been harshly criticized for shutting out his government partners from the decision-making process on key issues, depending instead on a small clique of aides from his Dawa Party.

Jalal Talabani: The senior and longtime leader of Iraq's Kurdish minority is serving a second term as president. He founded the Patriotic Union of Kurdistan in 1975, one of the two main Kurdish parties that fought Saddam Hussein. Talabani has built a "father of the nation" reputation over the past four years, steering a neutral course when dealing with a host of complex and divisive issues. He is reported to be seeking another presidential term, but the PUK is being challenged by an upstart Kurdish party called Change that may upset the Kurdish balance of power.

Adel Abdul-Mahdi: The Shiite vice president is a French-trained economist who has been a prime minister-in waiting since 2005. Abdul-Mahdi, a stalwart of the Iranian-backed Supreme Islamic Iraqi Council party, twice came close to becoming prime minister but missed out in both cases to candidates from the Dawa Party. Abdul-Mahdi's reputation was somewhat hurt last year when army officers seconded to his security detail were found to be involved in a deadly bank robbery. Abdul-Mahdi may get another shot at the prime minister's job if the Supreme Council wins the largest number of seats inside the Iraqi National Alliance.

Tariq al-Hashemi: The Sunni vice president, who is the grandson of an Ottoman-era general, has been among the harshest critics of Prime Minister Nouri al-Maliki. A Sunni, al-Hashemi has quit the Iraqi Islamic Party that he once led and is now running for parliament in a secular coalition led by former Prime Minister Ayad Allawi, a Shiite. He is arguably the most powerful Sunni Arab politician in Iraq today.

Muqtada al-Sadr: The fiery, anti-American cleric is not running in the election but has endorsed the vote, calling it a means of "political resistance." In the past, al-Sadr, who is thought to be living in Iran, denounced elections as a sham because they were held under American "occupation." Al-Sadr's politics are radical and populist. His opposition to any U.S. role in Iraq has been uncompromising. But it's his close ties to Iran now that could undermine his standing as a man who once wooed supporters with his pan-Arab rhetoric.

Ayad Allawi: The former prime minister is the face of secular politics in post-Saddam Hussein Iraq. A Shiite, Allawi has carved a niche for himself in today's Iraq as the answer to urban and educated Iraqis, both Sunnis and Shiites, who are dismayed by the religious parties and the close ties they maintain with the country's cleric-ruled neighbor, Iran. A physician by training, Allawi was a member of Iraq's outlawed Baath Party until the 1970s.

Ibrahim al-Jaafari: A former prime minister, al-Jaafari is running in a mostly Shiite coalition led by the Iranian-backed Supreme Islamic Iraqi Council and followers of anti-American cleric Muqtada al-Sadr. He is widely believed to have a chance at becoming prime minister if his allies, the Sadrists, emerge from the vote as the party with a larger number of seats than any other group in the coalition.

Ahmad Chalabi: A one-time Pentagon favorite and insider, Chalabi is running in the same coalition led by the Supreme Islamic Iraqi Council and the Sadrists. He failed to win a seat in the last parliamentary election in 2005, but is virtually assured of one this time around. Chalabi's relations with the United States soured when the intelligence he provided the Americans on Saddam's weapons of mass destruction proved faulty. The U.S. also accused him in 2004 of spying for Iran. Chalabi is a secular Shiite who is loathed by the country's Sunni Arab minority for the zeal he has shown in rooting out Saddam's loyalists from jobs in the government, armed forces and security agencies.