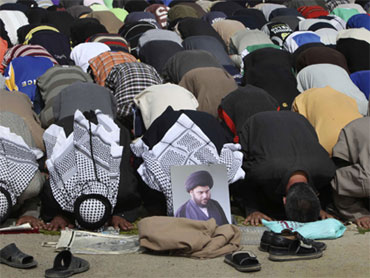 In a surprise news conference on the eve of the Iraqi election, anti-American cleric Muqtada al-Sadr has urged his followers to turn out and vote.

The Shiite leader spoke from the capital of neighboring Iran, and the press conference was broadcast on al-Alam television, Iranian state TV's Arabic-language station.

Al-Sadr is believed to be living in Iran and studying in the city of Qom, Iran's foremost seat of Shiite learning.

This is believed to be al-Sadr's first public appearance in two years. But he retains a large following in Iraq which is expected to turn out in large numbers in Sunday parliamentary vote.

Al-Sadr, who considered past elections illegitimate, has joined a Shiite alliance led by an Iranian-backed party - the Supreme Islamic Iraqi Council. He has endorsed this election as a means of "political resistance," raising the likelihood of a large turnout by Sadrists and the possibility that the alliance could emerge as Iraq's strongest political force after Sunday's vote.

In areas where anti-U.S. cleric Muqtada al-Sadr's Mahdi Army once held sway, many Iraqis say young men who had worn the militia's signature black shirts have returned ahead of Sunday's parliamentary elections, albeit in smaller numbers and a low profile.

Many Sunnis in flashpoint neighborhoods say they are lying low or temporarily moving to safer areas as they wait in fear that the elections will spark a new sectarian backlash against them.

Omar al-Jubouri, a 26-year-old Sunni university worker, saw some of the same Shiite militiamen who forced him to flee his home five years ago back in his south Baghdad neighborhood.

"I sensed the threat, so we locked the house and left," said al-Jubouri, who took his wife and two children out of Abu Dshir, a Shiite enclave in the mainly Sunni Dora district, to stay with relatives elsewhere in the capital.

"I fled because I don't want to be terrified again like in 2005," he said. "We escaped so my children can continue to have a father and not become orphans."

Ex-Mahdi Army members appear to have been emboldened by the prospect of an Iraq free of the U.S. military and by al-Sadr's decision to join a Shiite-led alliance that may become the single largest bloc in the next legislature. The alliance could earn the right to nominate the next prime minister.

The radical cleric's movement fought bloody battles with Sunni militants and the Americans and was blamed for some of the worst retaliatory sectarian violence. The elections could give it more leverage than it has had since it burst on the scene after the 2003 U.S.-led invasion that ousted Saddam Hussein.

Bloodshed between death squads from the two rival Islamic sects brought Iraq to the brink of civil war before a U.S. troop buildup in 2008 helped rout the extremists from both sides.

Violence has dropped sharply and bullet-riddled bodies are no longer found on the streets by the dozens. But war-related killings have increased in the run-up to Sunday's elections, and intimidation appears to have made a comeback in some Baghdad areas.

Abdul-Azeem Mohsen, a Sunni, last week received a letter threatening him with death if he did not leave his home in the western Baghdad neighborhood of Baiyaa. The once religiously mixed neighborhood saw some of the fiercest sectarian cleansing that ended with the Shiites in control.

"My neighbors pledged to stand by me against the militiamen," said the father of five, who trades in wholesale groceries in the city's Shorja market across the Tigris River on the eastern side of the city.

Mohsen is not taking any chances. He says he plans to sell his home, even below market prices, and buy another in the Sunni district of Amariyah.

"Fleeing is my only choice," he said, "fleeing from one uncertainty to another so I can keep my family alive. What else can I do?"

Sunday's election for a 325-seat legislature has been billed as a key step in Iraq's democratic evolution. Iraqis hope it helps them achieve national reconciliation at a time when the United States is pressing ahead with plans to withdraw all its forces by the end of next year.

Prime Minister Nouri al-Maliki, who in 2008 initiated several offensives against Shiite and Sunni militant groups, is seeking a second term in office. He leads an alliance that is dominantly Shiite and led by his Dawa Party. He refused to join the Supreme Council and the Sadrists in one coalition.

The decision by a Shiite-led vetting panel to disqualify more than 400 candidates from running because of alleged ties to Saddam's outlawed Baath party also has left many Sunnis seething. They see the move as a thinly veiled attempt to undermine their minority community, which dominated Iraq under Saddam.

Some Shiites are worried that extremist Sunnis will respond to the elections with bloodshed.

Ali Jabar Nasser, a Shiite who lives in the Sunni part of Dora, said he and 10 of his Shiite neighbors recently installed a system that allows each household to sound an alarm if anyone sees armed Sunni militants. They also take turns patrolling the street.

"We are worried and think the elections can lead to a deterioration in security," said Nasser.

In one of the worst recent incidents, eight members of one Shiite family were shot and beheaded last month in the village of Wahda, a mixed Shiite-Sunni village south of Baghdad.

Al-Sadr's movement has returned to using the "Sadrist Trend" - its official name - on its campaign propaganda material. In previous elections, the movement said it was only backing selected independents.

Iraqis generally vote along sectarian lines. Shiites make up 60 to 65 percent of the country's estimated 28 million people, while Sunni Arabs and Kurds make up about 15 percent each. The rest are Christians, Turkomen and several other tiny communities.

Some of the tens of thousands of campaign banners and posters that have sprung out in Baghdad over the past few weeks have a distinct sectarian slant; some residents also blame them for stoking the tensions.

The Shiite head of the committee that banned the candidates, Ali al-lami, has this to say on his election posters: "No, to all forms of terror, corruption and the criminal Baath from now on."

The Supreme Islamic Iraqi Council is thought be behind the hundreds of posters in Shiite areas of Baghdad bearing the image of the country's top Shiite cleric, Grand Ayatollah Ali al-Sistani, in a move designed to use the name of the much revered cleric to attract voters.

In a clear provocation to the Sunnis, former Deputy Health Minister Hakim al-Zamili, one of two former government officials accused of allowing Shiite death squads to use ambulances and government hospitals to carry out kidnappings and killings, is running for parliament in the Shiite-led coalition led by the Supreme Council and the Sadrists. The charges against the two were dropped two years ago.

The number of Iraqis killed in war-related violence increased by 44 percent - to at least 255 - between January and February.

Figures compiled by The Associated Press show that at least 30 unidentified bodies were found in January and February across the country. That was still a low number compared with past years but a number large enough to suggest that sectarian killings may not have entirely ceased.